A Porsche 911 with a turbo is not a new thing. It makes a 911 go faster, which many consider a good thing. But a 911 with a turbo and not a single naturally aspirated model? And chosen on efficiency grounds, not power ones? That is something new. Welcome to the new 991 Gen 2 Carrera. 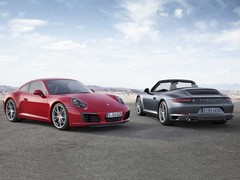 are powered by a an all-new 3.0-litre twin-turbo flat-six. The Carrera makes 370hp and 332lb ft, the Carrera S 420hp and 369lb ft, both representing gains of 20hp over the old 991. The S receives new turbine compressors, exhaust and remap for the additional power. The torque figures are up a nice, even 60Nm (44lb ft) over the old car.

Revs for peak power haven't been released yet, but the torque peak is available right from 1,700rpm to 5,000rpm; that's a really big change when you bear in mind the old engines needed 5,600rpm. Don't worry too much though, it still revs to 7,500 and Porsche is adamant that the 'sonorous... flat-six engine sound' remains.

Moreover, with the right options - more on those to follow, of course - a 911 Carrera S will now reach 62mph in 3.9 seconds and a 191mph. In a Carrera S! That and a 7min 30sec 'ring lap too... The Carrera posts figures of 4.2 seconds and 183mph, again assisted by PDK and Sport Chrono. The entire press release doesn't mention the manual gearbox at any point... The final notable numbers are the fuel consumption figures: 38.2mpg and 169g/km for a Carrera PDK, 36.7 and 174g/km for a Carrera S PDK. Both pretty astonishing. 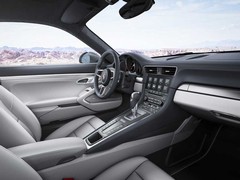 Updates in here important too

Predictably enough the styling changes are best described as evolutionary. When Porsche is even stretching it to 'handles inset to the door panel without recess covers' you know there's not a great deal to mention. The front follows other Porsche models with the four-point daytime lights, there are new louvres on the engine cover and some updated rear lights too.

If anything the changes inside are more significant, with Porsche Communication Management now revised to include Apple CarPlay, real-time traffic info with Google and a touchscreen that handles smartphone gestures.

You may well have noticed the new steering wheel too, inspired by the 918 Spyder and 375mm in diameter. There's an optional 'GT sport' item that is just 360mm across and that seems like a good place to start on the long list of Porsche 911 options. Deep breath... 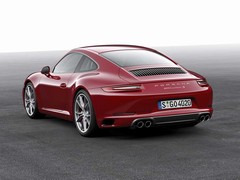 Familiar but just a bit different

Interestingly Porsche Active Suspension Management (PASM) is standard on all models, with new dampers said to enhance comfort and provide a more precise response. But there remain plenty of boxes to tick. Rear-axle steering, as seen on the

, is available on the Carrera S, Sport Chrono now features a 'mode switch' on the wheel to configure an individual set-up and a hydraulic front lift system too. Seems a bit much for a 911 Carrera.

So it's a pretty detailed update for the 911, but then it faces tougher competition than ever with cars like the AMG GT, BMW M4 and Lotus Evora 400 entering the fray with their own unique talents. The new 911 is available to order today with first deliveries in time for Christmas. The Carrera starts at £76,412, a modest increase from the £73,509 it used to cost. A Carrera S is £85,857, or £2,312 more than previously. The premium for a Cabriolet is £8,841 and not a pound more, which makes a Carrera Cab £85,253 and a Carrera S £94,698. Phew. There's a detailed tech story, the Frankfurt reveal and a drive to follow soon; plenty more 911 coming!