Nine months is a long time in the car industry. Back when the last spy shots of a

emerged in February, the new Panamera was still to be seen. Following that car's disguised debut at

and a motor show reveal, we now know a lot more about the saloon. And yes, a drive is coming soon too. But even before then, there is more to be said about this Shooting Brake. 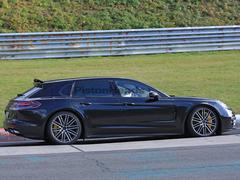 Hang on, is this a Turbo?

It looks largely similar to the saloon up to about the B-pillar, with the same grilles and 911-inspired headlights. From there back it actually appears a fairly conventional estate, though more on the CLS Shooting Brake end of the scale than an E-Class or A6. Note as well the secondary spoiler that will surely contribute to a suitably daft lap time around the circuit it's seen testing on; there's only

to beat, after all.

Expect the interior to replicate the Panamera saloon as well, with the fancy digital display and touch controls. Five seats with a bit more boot space than the saloon would also seem more likely than seven.

A final note on the spec here too. The yellow calipers and wheels look like those from a Turbo, implying that a 550hp flagship will make it to the estate as well. Which is rather exciting. Should make for quite a comparison with the new Alpina B5 Touring and E63 wagon when they arrive as well. More news when we have it!