It takes some chutzpah to make

the least interesting car on your stand but when Porsche reveals a new GT3 RS it tends to put most things in the shade. Especially beneath the most outrageous fixed wing ever fitted to a roadgoing Porsche. 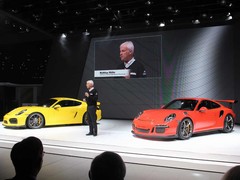 In front of Piech (Hon.-Prof. Dr. techn. h.c. and Mrs), Winterkorn and other VW group bigwigs Porsche boss Matthias Muller revealed the car we've all been waiting for. Headlines? 500hp from a normally aspirated 4.0-litre flat-six and 339lb ft of torque - up from 3.8 litres, 475hp and 325lb ft in the standard GT3.

Although weight saving is a big story - including a magnesium roof, carbon front lid and engine cover and more - the RS only weighs 10kg less than the 1,430kg GT3. Bear in mind it uses the bigger Turbo body though.

The upshot of this is wider track front and rear, plus the additional aero provided by the enormous biplane rear wing and further improved by those distinctive vents in the front bodywork. These reduce pressure in the arches and improve downforce on the front axle. All this adds up to a Nordschleife lap time of 7min 20sec, seven seconds faster than the last RS, the 997 4.0. 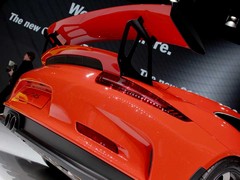 Wing big enough for you?

Anyone hoping for a stripped back spec compared with the GT3 will be disappointed too - there's no manual gearbox or 'purist' option of deleting the four-wheel steering. Both are carried over into the RS.

Under the show lights the vivid orange of the launch car looks a little insipid - going by the accompanying video where it stamps its authority on the Cayman it's anything but out in the real world, though die-hard RS fans may bemoan the lack of 'distinctive' graphics as worn by previous examples. The rest of us probably won't though. And by any measure it's a fabulous looking thing, utterly unapologetic and suitably intimidating from every angle. For full track credentials the familiar Clubsport package of cage, battery kill switch and harnesses is available, the more new-school Porsche Track Precision app available with the Sport Chrono upgrade. Leaving the only possible weak spot in the package as ... you.

Anyway. How much? The German market price is quoted at 181,690 euros (the GT3 is/was 137,303 euros in its home market) with deliveries starting in May. Going by the bunfight for Cayman GT4s if you haven't got your foot in the door here you're probably already too late.