It's one that we've known about for a while and the day some have been fearing, but details of the turbocharged

have now been confirmed. Boxster and

become 718 Boxster and 718 Boxster S, lose two cylinders, gain a turbo and bang another nail into the coffin of the normally-aspirated sports car. At this stage Porsche is only releasing details for the 718 Boxster range; those for the 718 Cayman will surely follow soon, along with confirmation of the new pricing structure that makes the coupe the entry level to the Porsche sports car range and the Boxster the pricier of the two. 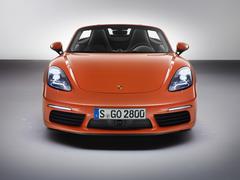 A far bigger change than the looks suggest!

Bear with us as there's quite a bit of number crunching to follow, condensed below in a comparison table with the outgoing normally-aspirated versions for reference. But the headlines are the change from a 265hp 2.7 to a 300hp 2.0-litre engine in the Boxster and from a 315hp 3.4-litre to 350hp 2.5-litre in the S. Both new engines are boxer fours with a single turbo. On the S this is a variable vane item - key technology previously reserved exclusively for the senior 911 Turbo models, the new

using two conventional ones. Porsche isn't going into details but you'd expect it's gone to the trouble to make sure the new motor's range and response sufficiently compensates for the loss of two cylinders, this being a bigger hurdle than faced by the Carrera.

Horsepower gains aren't the main story with the new engines though - the huge increase in torque and where it appears in the rev range will be the real difference. The Boxster leaps from 206lb ft to 280lb ft, the S from 265lb ft to 310lb ft, meaning the entry level Boxster has more torque than the outgoing GTS. All sounding good so far, right? Prepare your furrowed brow for the next bit... 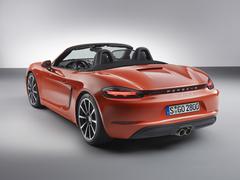 In the modern style the turbo engines deliver their peak torque from very low revs; 1,950rpm in the Boxster and 1,900rpm in the S, both maintaining this to 4,500rpm. Which, in a twist of fate that'll not be lost on fans of normally-aspirated motors, is exactly the point where the six-cylinder engines were coming on cam and delivering their best.

Your opinion on this one key character trait will define any further conversation about the pros or cons of the Boxster/Cayman range going turbo. In the 911 it's made for a more tractable, flexible and exploitable car at the cost of the high-revving excitement diehards will say defines the Porsche experience. The difference in the 718 range will be even more marked, given the loss of two cylinders and significant reduction in capacity. More power, torque and performance will always be welcome. But Porsche needs its new engine to have the necessary fizz and zing, as well as do the impressive numbers. We'll have to wait and see on that. Will the normally-aspirated six live on in halo models like the Boxster Spyder and Cayman GT4? Porsche isn't saying so far but, if not, expect the desirability of these cars to be increased yet further. 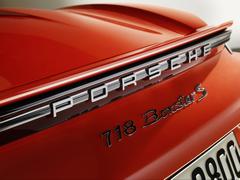 For the full performance stats see below; so far Porsche has only released 'best case' acceleration figures for cars with PDK transmission and optional Sports Chrono. Like for like with the existing cars the 718 S's 4.2 seconds is half a second quicker than an equivalent Boxster GTS and six tenths faster than a PDK/Sports Chrono equipped S. The standard 718 Boxster is a whole second quicker off the line than an equivalently specced current car too. The difference is less marked in terms of top speed but it's clear the 718s will feel a lot quicker at regular road speeds. This will no doubt be helped by a kerbweight that only climbs by 5kg for the Boxster and 15kg for the Boxster S.

Aesthetically more has changed than you might think from your first glance at the pics. Porsche says only the luggage lids, windscreen and soft-top are carried over, with new lights front and rear, bigger intakes on the front and sides and new Porsche script revealed when the rear spoiler emerges from the bodywork.

Chassis-wise steering is 10 per cent 'more direct', there's the option of PASM with a 10mm ride height drop and, for the S, PASM Sport which runs 20mm lower than standard. The optional Sport Chrono package adds an individual mode to the rotary mode switch; if you've got PDK too you get a Sport Response Button in the middle of it for a 20-second novelty 'push to pass' function. 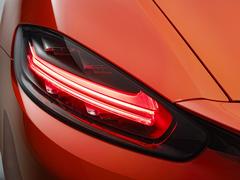 Inside there's Porsche's new PCM system which, inevitably, can be "extended with optional modules to thoroughly adapt it to personal requirements." Ready that options list... Speaking of money the new 718 Boxster starts at £41,739 - nearly two grand more than the current model - while the S is £50,695, a leap of nearly £3,000. Deliveries start in the spring.

So that's the initial number crunching out of the way. But the debate about the merits of the new turbo engines promises to run and run with the proof, as ever, being in the driving. Noise, response, character - these things will matter to many on PH. Will they be as important for the broader customer base, raised on turbos, impressed by the significant spec sheet gains and considering the faster, more frugal 718 Boxster a demonstration of more bang for your buck?

This one will continue for a while...

Search for current Boxsters in the PH classifieds here