Porsche gathers journos to tell us why a turbocharged four is not the end and why, eventually, we might even grow to like it

"Early in development of the 718 boxer engine, we built a mule," Dr. Moritz Martiny recounts. "It sounded awful, like an old Volkswagen Beetle." He has probably spent longer even than us discussing the merits of four-cylinder aurals recently. "We knew we had a lot of work to do." But that was back then, and now we're getting our first experience of the

. "Driving it, there are perhaps times you wish it were still a six," he admits. "But you soon forget that with everything else this engine delivers."

First, some fundamentals. This is the B4 version of Porsche's latest-generation B6 turbo engine family, found in the latest 991.II. In the 911, it's a tight fit; in the Boxster though, a six-cylinder turbo is impossible. You either have no boot, a longer car, or no turbo - it occupies the space where two cylinders would otherwise sit. No turbo isn't an option (emissions, economy, engine 'rightsizing'), nor is a stretched or bootless Boxster. So Porsche chopped off two cylinders, then set about making it work. 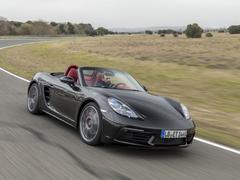 No drive just yet, sorry!

Not least, the huge thermal challenges of a mid-mounted, turbo engine with a 7,500rpm redline but just two side air intakes. "It wasn't easy," says Dr. Martiny, knowingly. The novel indirect intercooling system is intricate, the thermal management strategies complex and even the cylinder head walls are 40 per cent thinner than before. As for the turbo, the Boxster's is regular, running 1.4 bar of boost. As opposed to the Boxster S, which gets a 911 Turbo-style variable geometry turbo at a maximum of 1.0 bar. Porsche is focused on maximising airflow and bolstering low down torque: indeed, that's why the VGT also retains a wastegate.

Both engines have VarioCam Plus, on both inlet and exhaust. The latter is interesting: unlike a six, flat-fours can suffer exhaust air interference, where waste gasses from one cylinder are drawn into the fresh air of a neighbouring one as they exit. VarioCam closes up the valves during part-load situations where this is an issue, so there's no cross-contamination. This system, like so many other parts, is either carry-over from or technically related to the B6 - Porsche estimates a 40 per cent carryover from the Carrera engine. So it's got flat-six genes, even if it isn't one.

The bald stats are 300hp for the 2.0-litre Boxster, 350hp for the 2.5-litre Boxster S (the extra size is purely from bore - 102mm instead of 91mm), and 0-62mph times reduced by as much as 0.8 seconds. Up to 13 per cent more efficient too - but it's the flood of extra torque way lower in the rev range which is noticeable. "We actually overdelivered on torque," Matthias admits to PH. "We knew people would be worried about losing two cylinders, so we wanted to give them something extra to compensate." 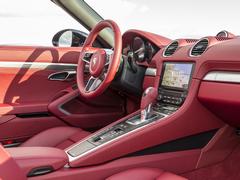 Fear not - the noise is good

. The engine's extra power and torque means a chassis overhaul, with wider tyres, bigger brakes, stiffer springs and anti-roll bars, and reprofiled dampers with rebound springs and thicker pistons. The rear axle has been stiffened by a cross-brace similar to that in the GT4 and Spyder; as the electric power steering is 10 per cent more direct for better low-speed sharpness, this helps stabilise response at higher speeds so the 718 doesn't become nervous. As do the wider tyres: 18-inch as standard, optionally up to 20-inch, with 10.5-inch rims and 265/35 P Zeroes.

There are three chassis options: standard, 10mm and 20mm lower - the latter is new. The Boxster gets brakes from the old Boxster S, while the S now has 991.II Carrera 330mm front discs which are 34mm thick rather than 28mm: thicker is better for cooling and heat dissipation. The 'halfway house' PSM Sport stability control option seen on the 991.II now comes to the Boxster, for sideways fun in a fast mid-engined car without the crash risk. Sport Chrono also has the new Sport Response button from the 911.

It looks different, with almost all exterior panels reworked to give flatter, tauter surfaces and smarter details. The deployable spoiler no longer stretches into the rear lights, which are beautiful clear-lens works of art. The 'PORSCHE' lettering on the gloss black panel is there because, says designer Heinz Redlich, "we're proud of Porsche and felt the name was too hidden on the old car". It's rather nicely 1970s. Following tradition, the Boxster has a single oversized tailpipe, the S has dual, and there's an active-flap sport option. Sound generator? Other than the symposer fitted before, none: it's all natural.

But it's the engine we're interested in, right? "Compared to this, its [the old engine's] lack of torque is just annoying," an engineer later confided. Porsche is convinced it's done a good job after what's clearly been one of the most challenging four-year development programmes it's worked on. The engineers are almost delirious when they talk about the complexities - but are also certain it's been worthwhile. 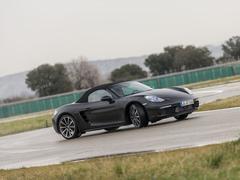 Probably one step beyond PSM Sport...

Never before has so little been said while waiting for a passenger ride in a new car. After two decades of six-cylinder boxer Boxsters, we're now being given a flat-four...

Yes, from the outside, at idle, it does sound like a Subaru. A surprisingly pronounced pulsing woofle throbs through the exhausts. It's not unappealing - a Subaru tuned by a voice coach - but cammy howl this is not. It pulls away: certainly, it's deeper and quieter than the old car's sound. There's less drama from the outside, and a lot less exhaust drone than a riced up Scooby. The noise seems purer, less obviously forced induction, concentrate and you can make out a nicely balanced high-rev hum.

But what about inside? The familiar Porsche rumble and undertone of meshing-mechanicals are there immediately. As we pull away it's certainly prominent, deep and meaningful and anything but flaccid. Very smooth, too, despite the issues with vibration Dr. Moritz Martiny had earlier admitted. Nothing like a Beetle either.

Then a lap or two at Porsche test driver speed. And? Yes, it's nice. It howls and revs hard, with rotary smoothness punctuated by familiar pops and crackles from the exhaust on overrun. It's a deeper noise than the six, and that mechanical chatter at low speed disappears at pace, becoming softer and quieter for all its rorts and blares. 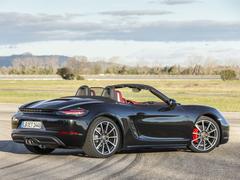 What's missing is the yowl and the harmony of a six at high revs. But what's also missing is the need to be up there all the time, because the turbo gives so much surge lower down. It feels suitably Porsche sports car fast from the passenger seat - and a demonstration of its minimal turbo lag suggests this could be a little bit of a mid-engined rocket.

Of course, in true first ride style, it's inconclusive. And, yes, Porsche hasn't magically made a flat-four imitate the six we all love so much. But why apologise for being its own engine, when the trade-off in sound seems to come with the promise of so much extra? No, we weren't left speechless, but the conversations with Porsche's engineers afterwards were at least encouragingly engaging, rather than uncomfortably silent.