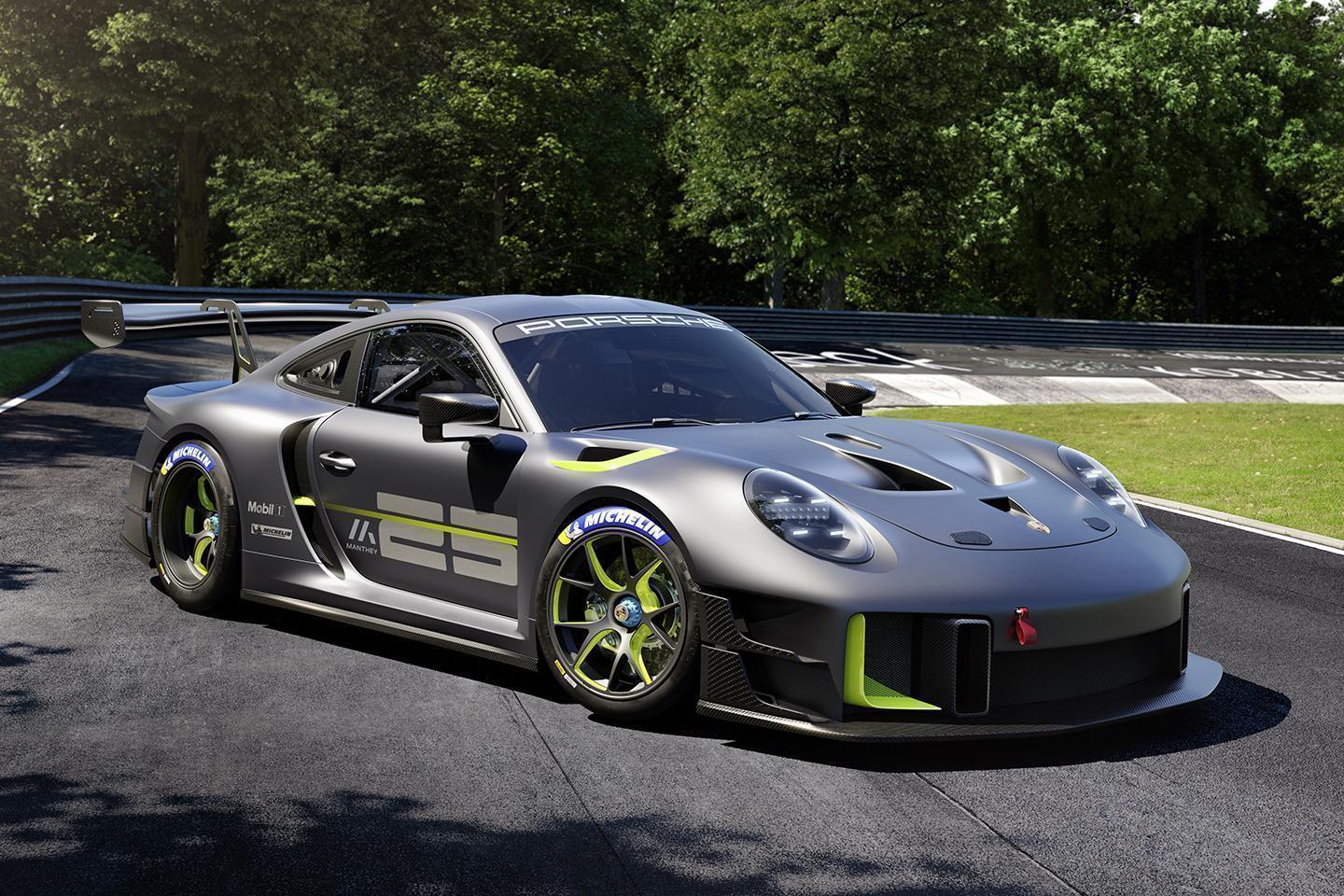 If you want a Porsche to go very quickly around the Nurburgring, you speak to Manthey Racing. Founded in 1996 by Olaf Manthey and based near the circuit, it's been making phenomenally fast road and race Porsches ever since. It was Manthey Racing upgrades that got the 911 GT2 RS around the Nordschleife in 6:40, and since 2006 the team has won seven Nurburgring 24-Hour races with 911s, more than any other team. It won four in a row from 2006-2009, no less, and this year's event. And 2019's...

So Manthey Racing knows what it's doing with Porsches. So much so, in fact, that Porsche AG itself bought a 51 per cent majority share in the company in 2013. Now, to mark a quarter-century of Olaf Manthey's eponymous company, we have this - the 911 GT2 RS Clubsport 25.

To most intents and purposes, this is the 991 GT2 RS Clubsport shown in 2018, albeit with some upgrades from experience gleamed in the past three years. So it still has the roadgoing GT2's 700hp flat-six and PDK gearbox, but there is also inspiration from the new 911 GT3 R and 935 track car. See the restyled front end, with new intakes (to supply a repositioned radiator), dramatic carbon aero flics, more pronounced bonnet vents like the 992 GT3 and a NACA duct to supply cool air inside. The vents on the arches are said to evoke the new 935, and the new lights are also found on the latest RSR.

At the rear, the Clubsport 25 follows the latest Porsche racers in adopting a ginormous san-neck spoiler; the wraparound edge is a tribute to Manthey's first 996-based racer. New rear lid vents help hot air escape the engine bay, and a reworked diffuser means the twin exhaust pipes can still take pride of place. The rain light is borrowed from the latest GT3 Cup car.

Underneath the Clubsport 25 is rather more 935 than GT2 RS. It borrows the former's centre-lock 18-inch wheels and the offset, meaning a "significantly wider track" than the Clubsport - with all the benefits for stability that that will bring. Porsches says the systems and steering gear are also pinched from the 935. And you thought it was just a bigger spoiler and funny accents on a regular Clubsport...

Speaking of which, the highlighter-coloured parts here are in fact painted 'Grello'; the Manthey Racing 911s have picked up the nickname thanks to their distinctive green and yellow liveries, so the two colours were combined for a few details of this anniversary special. Note even the '25' badge at the back and spoiler support brackets haven't escaped the treatment.

So if you've ever wondered what a modern-day bitsa 911 might look like - based on a 991, but with some 992 bits and a lot of motorsport influence - the Clubsport 25 is that car. Manthey's MD Nicholas Raeder said of the new model: "With the 911 GT2 RS Clubsport 25 special edition, which we designed and developed in conjunction with Porsche Motorsport, we've reached another milestone in the 25-year history of Manthey. It's a perfect example of our guiding principle 'Closer to Perfection'. He contined: "With every modification, technological function always takes priority. That's why the 911 GT2 RS Clubsport 25 has its very own character, which also reflects our brand values: straightforward and meticulous, flexible and uncompromising."

Just 30 of these circuit-only special editions will be built, which seems an odd number given the quarter-century anniversary. A few more people have the chance to buy one, at least. Porsche is asking €525,000 for each of the GT2 RS Clubsport 25s, plus local taxes, which is a pleasing saving over the €700,000 asked for a 935 in 2018 - there were 77 of those, too. Interested parties should contact Porsche now, with deliveries expected to start in January. Best get booking a few track days.