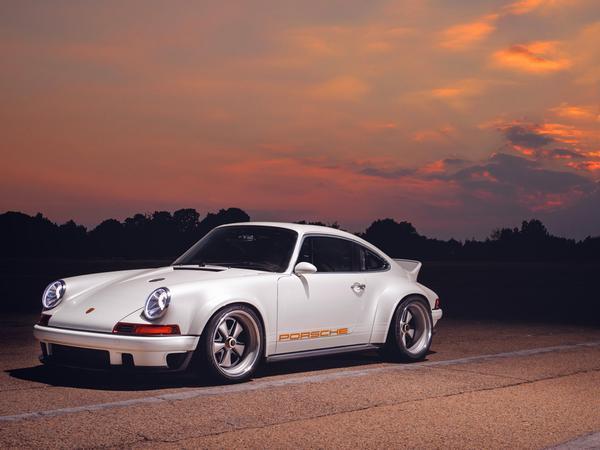 In November last year, Singer Vehicle Design released images of a reimagined Porsche 964 in Absinthe, taking its work with the model to another level. Every panel was bespoke, Williams was connected with building it and the legendary Mezger flat-six was up to 500hp - even by Singer standards, it was something very special.

Now, after two years of work, the car is complete, and the 'Dynamics and Lightweighting Study' will make its debut at the Festival of Speed this weekend. In fact, there will be two DLS-restored 964s to be seen, one going up the hill and one on display outside the house.

So, what's new? Well, damn near everything by the sounds of it. With "technical advice and consultancy" from Hans Mezger himself, plus magnesium and titanium to reduce weight, the 4.0-litre makes its peak power at 9,000rpm. Performance claims haven't yet been released, though when you bear in mind this is a car with the power of a GT3 but around 250kg less weight, the DLS is going to be extremely fast.

As with the engine, Williams Advanced Engineering has been involved with DLS aero work. And joining Mezger in the Porsche Who's Who for this collaboration was Norbert Singer, as you may remember from their initial announcement. Remarkably Singer has claimed to eliminate front axle lift with a new splitter and revised front oil cooler. There's said to be genuine downforce at the rear, too, thanks to the revised ducktail spoiler and its work in conjunction with the roof and rear window.

Every single carbon body panel is unique to the DLS, though its changes over the 'regular' reimagined 964s extend beneath the skin as well. Williams' involvement has included a "full weight-down study", with the focus said to be on "torsional stiffness, mass efficiency and driver environment". Their work even went as far as moving the engine forward and relocating certain components to the front boot for "optimised chassis balance". Just in case the overhaul didn't look thorough enough...

The six-speed manual is by Hewland (again made lighter through the use of magnesium), the brakes are carbon ceramic Brembos, the wheels are forged magnesium BBS, the seats are carbon Recaros and the steering wheel is by Momo, also carbon. Much of this stuff is unique to the Dynamics and Lightweighting study, too. Oh yes, and the tyres are Michelin Pilot Sport Cup 2s, again in a bespoke size for this DLS. Blimey.

To be honest, that mechanical package could go in a Porsche that looks like Sally Carrera from Cars and we'd still be very excited but, of course, the DLS does not. It's fiercer than anything we've seen from Singer thus far; the haunches wider, the wheel dish deeper, the stance more aggressive and the attitude even more racy. From here the DLS looks absolutely marvellous - inside and out.

"The Dynamics and Lightweighting Study has been years in the making. To see the results, representing the ongoing pursuit of our client's vision for their ultimate air-cooled 911, is so exciting", said Singer's Rob Dickinson. This has to be the peak for 964s, doesn't it? Although many people probably thought that was true for the original Singer reimaginations. Those searching for a price will continue to do so in vain, though this DLS is surely a seven-figure car now. Handy that it does look a million dollars, then. Would there be space in your Lotto dream garage for one?