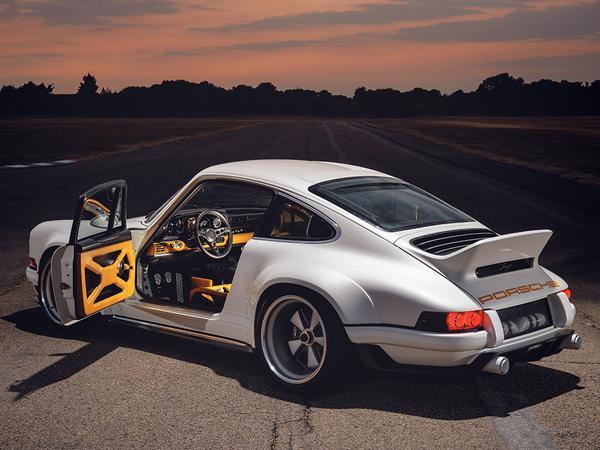 Singer Vehicle Design will celebrate its tenth anniversary at Monterey Car Week in California this month, where it'll once again display its Dynamics and Lightweighting Study show car at Monterey, a little over a year after it was first unveiled at the Goodwood Festival of Speed.

When I sat down with company founder Rob Dickinson and managing director Maz Fawaz at Goodwood this year, they told me the first customer cars will be delivered before 2019 is out. The pair also spoke at length about how difficult it was to make the numbers add up, even though the $1.8m asking price looks enormous and 75 cars are being sold. But the part of the conversation that stayed with me didn't concern delivery dates or profit margins, rather the input of a couple of German fellows who know a thing or two about Porsches.

Reducing Hans Mezger and Norbert Singer's careers to a single sentence is a bit like explaining the big bang theory in a tweet. Which bits do you leave out? The latter arguably deserves more credit for Porsche's record 19 victories at Le Mans than any other individual. The former, meanwhile, led the design and development of the 917's flat-12 engine, as well as the flat-six that first powered the 911 GT1 to Le Mans victory in 1998 and would later be found in the rear of the first two generations of 911 GT3 and GT3 RS.

"It was my idea to contact those guys," says Rob. "I thought we couldn't do something like this [the Dynamics and Lightweighting Study] and not let the two dudes who had most to do with the air-cooled 911 know what we were up to. It seemed perverse not to. Through a lot of hard work we got through to them and they took us seriously. Yes, there was a sense it'd be good for us if we could say these guys had put their flinty eye over our car. But also, they're not going to be around forever and we wanted them to be included." And why not?

Dickinson's company is named after all, at least in part, in tribute to the legendary Porsche engineer.

Initially, the Singer Vehicle Design team visited the pair near Stuttgart for preliminary meetings. Later on, they flew Singer and Mezger to the UK and took them to Williams Advanced Engineering, Singer Vehicle Design's technical partner on the project. "They met Frank for the first time in 25 years, we proved there were some adults in the room and after that I think they felt this was a proper endeavour," comments Rob.

There are many ways in which the Dynamics and Lightweighting Study breaks new ground for air-cooled 911s. It has a custom double-wishbone front suspension arrangement, for instance, rather than simple struts. And following substantial reconfiguration, its ducktail spoiler actually produces meaningful downforce, rather than the modest amount it did in period. Perhaps most ambitiously, though, the car's engine, which is still air-cooled, features four-valve heads. That's a first for a 911. Mezger and his engineering colleagues considered the four-valve head concept several decades ago, but abandoned the project when they realised how expensive and time consuming it would be.

"They had spent a lot of time on it but never actually tried to build one," says Maz. "We'd heard a rumour it couldn't actually be done. Hans turned up to our first meeting with a leather folder full of drawings." Mezger, it turned out, was somewhat incredulous. "Yes, we tried this," says Rob in a staged German accent, mimicking the engine guru. "We abandoned it, it's stupid. Why do you want to do this?"

If you're very close to something or someone iconic, you can't possibly understand the extent to which that thing or person is idolised. To you, it's just normal. There must be a law that describes exactly that. I think of it like this: Adrian Newey's son probably doesn't look up to his old man like he's some sort of deity, the way a lot of us would. That's just his dad. So it is with Hans Mezger and Norbert Singer, who have been far too close to the 911 throughout their careers to see why it is so revered. Rob believes so, at least. "What's interesting about these two guys," he says, "is that they're absolutely non-plussed about why anybody would want to dick around with a 911 like this. That's laying it on a bit thick but there was a sense of, 'Why are you doing this? Go and do something more interesting than messing around with this ancient car.'"

"Hans seemed kind of stressed by the idea," adds Maz. "It definitely brought some stress into his life. Not Norbert: he was quite entertained by the whole thing." As a case in point, Mezger didn't see why Singer Vehicle Design wouldn't simply run water through the car's engine: after all, it'd solve all their problems. But the engine would no longer be air-cooled and for Rob and Maz, both of them hopeless early 911 evangelists, that was non-negotiable. Whereas engineers tend not to romanticise these things, enthusiasts cannot help themselves.

So what input did the two old timers actually have? "They gave us some important shortcuts at the beginning of the project," says Maz. "They told us exactly what problems we would have. And they were right about everything. What Norbert had to say about aerodynamics was really evident in our computational fluid dynamics. Most of the airflow at the back of an old 911 goes over the top of the ducktail spoiler, exactly like Norbert said." Using modern techniques and present-day understanding - which, of course, weren't available to Porsche five decades ago - Singer Vehicle Design and Williams were able to get the ducktail working.

For Rob, however, it wasn't Norbert Singer's input that was invaluable, but his seal of approval. "When Norbert saw the finished car," remembers Rob, almost misty-eyed, "he said to me, 'Well, it's perfect.' I kid you not, he said it was perfect. I picked myself up off the floor, then Norbert walked over to the car, took a few photographs of the engine, of the spoiler, and said, 'I'll see you again.' It was one of the best moments of my life."