The easiest job in the world?

Chief scribbler for the Porsche 911? That's got to be the biggest doss in the design world, right?

"PistonHeads? Wow, everyone back at the studio, we are always on PistonHeads looking at old 911s in the adverts!"

Not just you then, Porsche head of exterior design Matthias Kulla and his team back in Stuttgart also avid browsers of the PH classifieds. Which might, indeed, back up the idea that coming up with a new 911 involves five years of sitting about in the Porsche design studio sipping espressos, waiting for the call from engineering to say the new car is ready, moving the headlights a bit on the design sketch and getting it signed off by the board before going out for a long lunch. 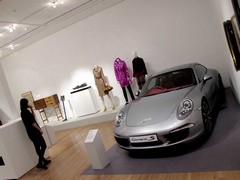 991 is, in this context, genuinely a work of art

Obviously there is a bit more to it than that, more on which in due course. But first of all, what brings the Porsche design team to the PH classifieds? "The prices for right-hand drive cars are much lower than in Germany," says Kulla. "964s are, maybe, 20,000-25,000 euros but we

see them on PistonHeads

for half that!" Clucking over old Porsches in the classifieds is a great ice-breaker but, in all honesty, Kulla's in relaxed mood anyway. Back at the Royal College of Art where he formalised his self-taught skills as a designer with an Audi-sponsored MA in the mid-80s he's here to help launch a new exhibition celebrating 175 years of the college. And obviously thrilled to be back in London.

"I still love watching the cars here!" he says, eyes flashing. "When I came from Germany you might see a Porsche now and then but nothing exotic. And then when I moved here to London there were all sorts of cars around." His own fleet is eclectic too, comprising Jensen Interceptor, 1966 fastback Mustang and Maserati Indy. 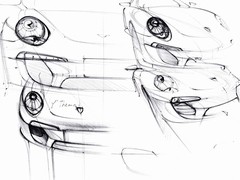 Kulla started drawing cars aged six, making models at 12 and, around that time and waiting for the school bus, spotted an ISO Grifo. "I said cars like this cannot be made by engineers or in the wind tunnel - they are made by artists!" After a spell at Target Design - home of the Suzuki Katana - he impressed the RCA enough to take him on as a post-grad student purely on the strength of his experience and portfolio. No mean feat, given that completing the course is a fast track to the car design elite with alumni including Jaguar's Ian Callum, Martin Smith at Ford, Peter Stevens, Gerry McGovern from Land Rover and Kia's Peter Schreyer to name just a few.

The artistic and creative atmosphere of the RCA clearly suited Kulla and just 18 months into his Audi job he got a call from Porsche design boss Harm Lagaay on Christmas eve asking if he'd like to join the team. Some Christmas present! And since 1989 that's where he's been. 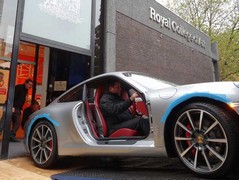 991 a bit of a squeeze through RCA's door

Life in 80s London certainly influenced his work too. "I thought when I saw an exotic car it must come from some better place," he says, somewhat idealistically. "But then seeing the cars here I realised exotic isn't always best. Certain Ferraris and Lamborghinis of the period, the first time you saw them you said 'wow!' but then the next time you look more closely and it's like 'uh huh...'" The boldness and complexity of

impressed him, his first major project at Porsche being the aborted 989 four-door.

Now head of exterior design he admits his role now is "the job I would have dreamed of while I was here at the RCA." But, really, how hard is it designing a 'new' 911?

"What is easier, to compose a symphony or a simple pop song?" he asks. "A symphony has a million different parts but a 911 has just a few elements. It's like cooking with just five ingredients. And we have progression in steps - the 996 was a big revolution in form, proportion and graphics. The 991 is a big step in proportion with the longer wheelbase and wider track but a smaller step in graphics and a refinement." And who's the hardest to please? Us! "German magazines always like what we do," he says. "The British journalists like Porsche but complain much more strongly if they think we got something wrong. The biggest reward is not to hear the British press say 'oh, they moved the lights or changed the wheels' but say 'wow, that's new!'" 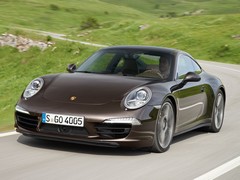 Interestingly he says the

is his preferred 991, saying "normally I'm a narrow-body guy and though it never occurred to me in the studio now I see the C4 on the street I think it looks better and it balances the wider front track of the 991."

Just as well the car brought to the RCA was a Carrera 2 though. One of the biggest exhibits at the show the clearance to get it through the front door was less than 20mm. It wouldn't go through with the mirrors so the doors had to come off the car - an easier job than removing the mirrors apparently. Obviously you don't have to take the trouble to go to the RCA to see a silver 911 in London but if a bit of artistic chin stroking is your bag it's worth a visit. For more on the exhibition, which opens to the public today, see here.