Just like a Golf, only with a slightly nicer interior now

In the wake of VW's issues in America, plus the ceaseless hype around the

, it could be easily forgotten that the regular Golf Mk7 has been around since 2012 now. Therefore it's due a VW nip and tuck, ahead of an all-new Golf Mk8 in 2018. 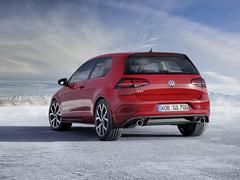 GTI Performance now up to 245hp

And yes, this is the new Golf. Definitely. Probably best deal with that first. It's the subtlest of subtle visual updates, the introduction of LED lights and some new wheel designs perhaps the most significant tweaks. Oh yes, and the bumpers are a bit different.

There are bigger changes inside, including an Active Info Display available as an option instead of the normal analogue instruments. The 12.3-inch screen works through five profiles - much like the Virtual Cockpit in a TT - that vary the information shown: 'Navigation' prioritises the map, 'Classic' retains a more traditional look, then there's also 'Consumption and Range', 'Efficiency' and 'Performance and Driver Assistance'. The central screen is now bigger on all models too, the smallest screen now 6.5 inches and the largest 9.2-inch Discover Pro system now featuring entirely haptic buttons and gesture control too.

All very nice. There's a customisable home screen as well. But while that's the stuff that will sell it to regular customers, PH is rather more interested in the fast Golfs. Sadly there's little to report just yet, a small power boost for the GTI (230hp for the standard car, 245hp for the Performance) and a newly developed seven-speed DSG the most significant news. If diesel is no longer a priority then the R400 must be a goer now, right? 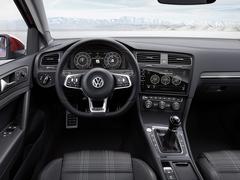 Gesture control in a Golf? It's happened!

Like almost every new car in 2016, the latest Golf comes with a raft of safety measures to prevent you from falling asleep, hitting the next car in traffic, reversing into a wall or burning your mouth on a pizza. Maybe not the last one. But listed in the Golf's suite of assistance features are Traffic Jam Assist, Lane Assist, Emergency Assist, Front Assist, City Emergency Braking, Trailer Assist, Park Assist 3.0 and PreCrash. That last one is proactive protection system, pre-tensing the seatbelts when the brakes are slammed on, rather than the dodgy F1 radio instruction it may sound like.

The noteworthy engine in the normal range of Golfs is the EA211 petrol, a 1.5-litre four-cylinder turbo with Active Cylinder Management and 150hp. It features a variable turbine turbo and CO2 from 110g/km (so 57.6mpg). A Bluemotion is on the way as well, with 20 less horsepower but the promise of greater efficiency.

So it's evolution rather than anything more for this Golf refresh, but what did you realistically expect? Full UK prices and specifications are due soon; as for the R and future Clubsport GTIs, it looks like we'll be waiting until 2017 now.