Despite being old enough to have retired, the original Morgan four-wheeler is still going strong 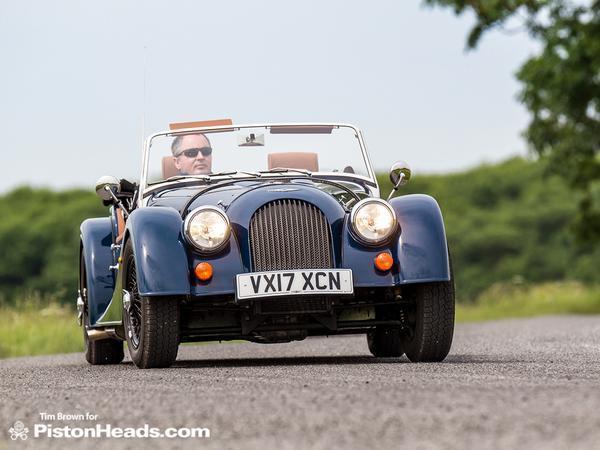 Morgan has always divided enthusiasts. Some regard it as being as quaint and charming and as quintessentially English as drinking warm beer in a queue to watch a test match while complaining about the weather. While an almost equally matched cohort view it as a living anachronism, one that builds woefully outdated cars for people who routinely wear tweed and say "tally ho!" without irony. 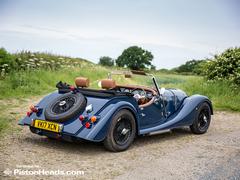 I used to be one of the doubters, unable to see much appeal in the idea of a factory fresh classic ticking every cliche and harking back to an age when cars just weren't very good. Morgans had wooden frames and wire wheels and leather straps, plus engines that delivered more rort than sport. The fact people were prepared to spend serious money on them, and to often wait years to take delivery, just added to this sense of eccentric madness.

But then I drove one, and the world suddenly shifting. Having a go wasn't easy; while the company was more than happy to let journos experience its more modern (and much more expensive) alloy bodied cars, there was no inclination to let us near the 'classic' side of the range. Likely in anticipation of all the rude things we'd say. I was sent to the factory to drop off an Aero 8 that had been used in a magazine story and saw a gleaming 4/4 demonstrator parked outside the office. Out of curiosity - and probably the desire to prove my prejudices right - I begged a go in it.

For the first five minutes, it was as bad as I had expected. The suspension crashed over everything, the bodywork shook like a shivering dog and - thanks to a shower - the fabric roof leaked water onto my lap. Yet, despite its flaws, it was also utterly charming - keen, benign in its responses and delivering the sort of sensory overload that made 45mph feel like double that. I returned to the factory wearing a startled grin - one I imagine they see quite often - and I've been a fan ever since. 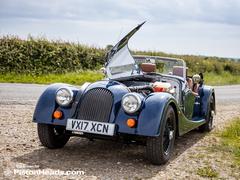 Staunchly traditional and proud of it

Although Morgan makes several classic models, the 4/4 was where it all began. Quite literally, its name denoting the fact that it had both four cylinders and four wheels, a novelty for Morgan in 1936. There were two production breaks, one during World War II and the other in the early 1950s, with a sizeable gap between the Series I and Series II cars. But even if you choose to date the 4/4's origins only to the launch of the latter version in 1955 it can still lay good claim to be the longest-lived car in the world. Many details have changed over the years, but the similarities are much more striking than the differences. Park a brand new Moggy next to its mid-50s ancestor and you could pretty much swap the plates undetected.

Like Morgan's other 'classic' models, the basic Runabout, the plusher Plus Four and the V6-powered Roadster, the 4/4 is built in the company's traditional way. That means a steel chassis and aluminium bodywork, this mounted onto an ash frame. (That pub bore who insists Morgans are made entirely from timber is an idiot.) Suspension is the oldest of the old school - it probably still writes on a slate tablet - with sliding pillars at the front, a technology first used by Morgan in 1909. At the rear is a solid live axle, suspended between two elliptical leaf springs. Front disc brakes arrived in the 1960s, and the modern car uses a five-speed Mazda MX-5 gearbox, but the rest of the rolling chassis has barely altered over seven decades.

The engine is the newest part of the car, and one that continues Morgan's long tradition of using humble powerplants in its cheaper models. These days the 4/4 packs a 1.6-litre Ford Duratec, normally seen in lowlier versions of the Focus and C-Max. With 110hp and 104lb ft it's unlikely to strain a dyno (although for contrast the Series II launched with a 1.1-litre Ford side-valve producing 36hp.) But the Morgan's lack of pretty much everything means it remains impressively light; the 795kg kerbweight meaning it is pretty much an Edwardian MX-5. 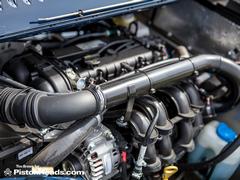 Ford 1.6 the most modern part of it

The secret of Morgan appreciation is to reset your expectations. The 4/4 can't be fairly compared to a modern sports car, or even an elderly one. For anybody arriving from something more recent - statistically pretty much anyone - early impressions will mostly be of the car's flaws, many of which actually add more character than they subtract. The lack of modern ergonomics are obvious from the moment you get in and slide legs into the tight-fitting footwell to discover the various awkwardly shaped brackets and extrusions you have to share it with. The steering wheel of our test car is a magnificent wood and metal Moto-Lita affair that looks as if it could knock out most of your teeth in an accident, and the column doesn't adjust for reach or rake. The only concession for differently sized drivers is the ability to slide the seat. The cabin itself is nicely trimmed, with some vintage style clocks although modern plastic control stalks. There's plentiful evidence that it's been built by hand, from self-tapping screws to occasional bits of swarf.

Dynamics are similarly Olde Worlde. The steering is unassisted, and vein-poppingly heavy if you try and turn the wheel when stationary. It lightens up as soon as the car starts to move, but only for the first half-turn or so of lock; add more than that and it's back to being a workout. Precious little feedback gets through to the rim, with none of the chatter of a Caterham or a Lotus, and it also needs constant small corrections to stay on a chosen course. Grip levels are sometimes startlingly slight on the period-patterned 165/80R15 Continental tyres, with the front wheels locking on dry tarmac at low speeds under moderate pressure on the unservoed brake pedal. The Morgan comes from an era when driver aids were definitely for wimps. 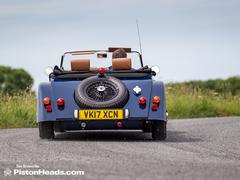 Limits are low but fun is very, very high

Yet Morgan has been doing this for long enough to want to keep its customers alive to buy more of its products. Once adapted to its foibles, and the need to keep a decent distance when following other cars, the 4/4 actually feels impressively secure. It feels like there's more lateral than longitudinal grip, the chassis tuned to stay safe and predictable as the limits get near. Excess speed sends the front running wide, but there's no matching sensation of looseness from the rear; even the combination of a low gear, lots of steering lock and an enthusiastic application of throttle doesn't produce any feeling of slip on dry tarmac.

This definitely isn't a car for the ragged edge, or even a mildly unkempt one. Like riding a motorbike - or a horse - the best approach is to try and work together, anticipating risks before they arrive and deploying the 4/4's modest power output to its best effect. With the roof down 60mph feels positively daring, and overtakes are a genuine achievement. The 4/4 isn't fast, but it never feels slow.

Indeed the engine suits the car almost perfectly. In Fords this is a utility grade powerplant, but the Morgan's lack of mass lets it reveal a genuine enthusiasm. Throttle response is excellent, mid-range torque is solid and the upper reaches of the rev range deliver a very rorty soundtrack through the optional sports exhaust (which exits on the driver's side to enhance its snap, crackle and pop.) The gearbox is an absolute joy as well, as slick and accurate as it is in the MX-5; it's a shame the floor-mounted throttle pedal is so poorly mounted for heel-and-toe blipping. But it's still one of those cars you change gear in just for the sheer hell of it. 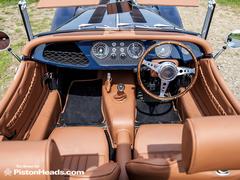 Get comfortable. Or try to, at least

Morgans have a strange ability to distort reality, to win you over. After a couple of days you stop noticing how terrible the ride is, and how much scuttle shake the car exhibits over rougher roads. The pop-fold-pop fabric roof starts to make sense; with a bit of practice you'll get the time taken to put it up or down under three minutes, and with only a couple of swearing fits. Hell, your legs even start to grow calluses where the sills and transmission tunnel rub, to the point they barely hurt. It's proof of just how charming the car is, and an explanation for the cultish appeal that has kept it in production for so long.

But there's also the grubby business of money. Put simply, a Morgan 4/4 has, historically, been among the safest of automotive investments. Back in the 1980s the combination of very gentle depreciation and a multi-year waiting list meant that Morgans were actually worth a premium for a couple of years after they were first registered. These days the waiting list has fallen to months if you want to specify your own car for factory build, and a glance at the PH classifieds reveals there are even unregistered cars out there ready to buy. But a tasteful Moggy still holds onto value remarkably well, with a depreciation curve that - over decades - will ultimately turn and start to climb again. It's entirely appropriate that a solid example from the 1940s or 50s costs nearly the same as a new one. 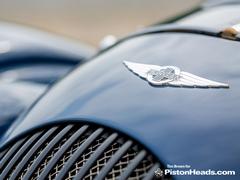 Flawed, of course, but also quite fabulous

Most car companies evolve at huge pace. Often, in the case of small sports car makers, too quickly. Look at the long list of British sports car makers through the ages and see how few are still trading; the ones that have endured are the ones with a loyal following and a product line-up that plays on a familiar theme rather than heading in radical new directions. As such, Morgan is the exemplar - a company which boasts fifth- and even sixth- generation employees, and where nothing changes unless it has to. While the 4/4 definitely isn't a car for all tastes, it's proof that tradition, craftsmanship and just being different can carry you a very long way.