Not a concept or a preview, the actual production NSX is at Detroit! Full details here

Where on earth do you begin with the Honda NSX? The replacement for a legendary original, a car we've been waiting many years to see and a car packed with innovative technology. Us? Eager? You bet! 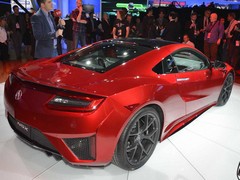 Alright, here's an interesting one to kick off: the NSX will be built in America. A 'Performance Manufacturing Center' [sic] in Marysville, Ohio will see full body construction, paint and final assembly. The parts are "domestic and globally-sourced." Perhaps not the most significant aspect of the new NSX but one that seemed worth highlighting.

Now if you''re of a cynical disposition, you will look at these pictures of the production NSX and say "Hang on, that's identical to the 2012 Detroit NSX concept, what the heck have they been doing for three years?" Apparently anticipating such responses, Honda has provided a detailed breakdown of where this cars differs. It is 80mm longer, 25mm wider and 15mm taller with a 20mm longer wheelbase. The proportions are also said to be slightly more cab-forward than previously. So there.

Anyway, the tech is the really interesting stuff with the NSX. The Sport Hybrid Power Unit combines a mid-mounted, twin-turbo, dry-sumped V6, three electric motors, a nine-speed DCT and Super-Handling All-Wheel Drive. An electric motor between the engine and transmission "supports acceleration, braking and transmission shifting performance" with the fronts driven by a pair of motors with torque vectoring capability. Honda is particularly keen to stress the benefits of this system as it provides "instantaneous launch performance and handling response that seems to anticipate the driver's desire." Certainly it sounds like a fascinating application of an electric motor's benefits. As for actual old-fashioned power and torque, nothing has been confirmed by Honda yet. Rumours are of about 550hp which we'll confirm as soon as possible. 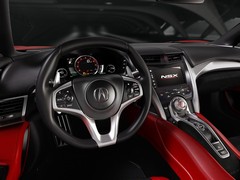 Still requires a human here though. Fancy it?

That's far from the end of the technological innovations either. The Sport Hybrid Power Unit motors along an Advanced Multi-Material Body, a spaceframe of aluminium, steel and other materials with a carbon floor. Honda claims a new, world-first casting process is used in the NSX that "combines the design and manufacturing flexibility of a casting process with the strength and elongation properties of a forged material." Right. It contributes to a low kerbweight which, er, Honda hasn't yet disclosed... Still, the centre of gravity is low with all the hybrid gubbins stuffed low and towards the centre of the car.

Still with us? Good, then you'll want to know about Agile Handling Assist (AHA), Honda's version of McLaren's Brake Steer, which uses subtle brake applications to "further enhance yaw response and dynamic stability." Standard carbon ceramics should do a decent job of all braking requirements. 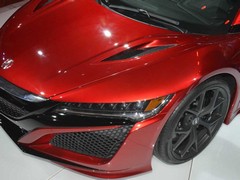 Promises a hell of a lot - we'll find out soon!

And what of the the soul driving all this? They reside in a "Human Support Cockpit" (that is real, honest). The main TFT display in front of the steering wheel will alters depending on the mode selected on the Integrated Dynamics System, the big central dial above the transmission tunnel. There are four settings from Quiet (EV mode at low speeds for short distances) to Track (that should be fairly obvious) with Sport and Sport + between them. As per usual for configurable driver settings, each mode influences the response of the electric motor, combustion engine, transmission and chassis behavior. It's all part of the NSX being a "human-centred supercar" you see.

Orders for the NSX will be taken from this summer with deliveries expected by the end of 2015. Unless there's another delay. Now we know Ford will have a relatively old-school rival for it too. Exciting times!