Qashqai with a GT-R engine a tad predictable after the Juke R? How about with 1,000hp then?

Who doesn't love a project car? The endeavour and graft that goes into certain conversions just has to be admired. Initial reception to the

was a little frosty though ('What a waste of time... There are children starving in the world!' being a favourite thread reply), but we think the latest update will please you. 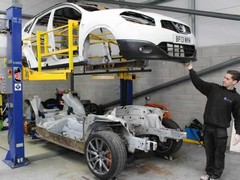 Body now on the GT-R powertrain

See, the GT-R/Qashqai+2 lovechild won't exactly be a standard conversion, if ever such as thing could ever be considered standard. Oh no. SVM will be building the GT-R's VR38DETT 3.8-litre V6 to 1000R spec. Blimey. The full spec on a 1,000hp GT-R engine can be seen

, but notable upgrades include forged pistons and rods, Stage 6 turbos and a blueprinted block.

So we gave the guys at SVM a ring to find out where they are with Qashqai 1000R. The body is now off the jig and attached to the GT-R running gear, and the welding is done up to the bulkhead. It aims to have the car ready for the Autosport show in January, and has already had some interest from potential customers. It's the perfect PH family car, right? 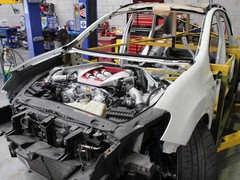 Furthermore, its appearance will be fairly discreet, at least as 1,000hp cars go. SVM says it's aiming for a 'street sleeper' look, with wheel arch extensions, a rear spoiler and a bonnet with functional air vents expected to be the only cosmetic changes. GT-R wheels will be used to accommodate some much, much bigger brakes than the standard Qashqai.

'What's the point?' was a feeling upheld in many of the original thread comments on the Qashqai R. 'Just because' seems to be the response from SVM, and we have a sneaking suspicion it will be rather hilarious fun too.