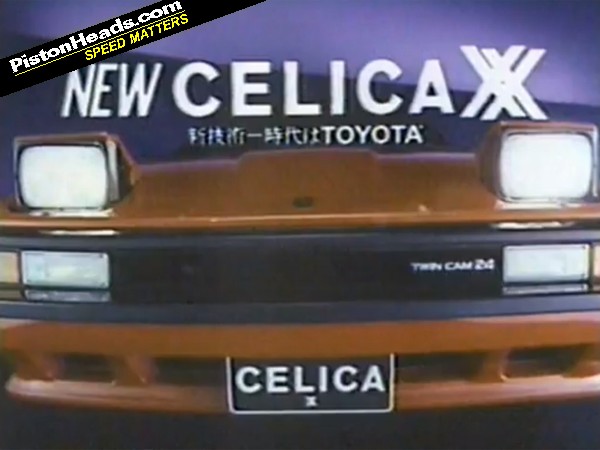 We try and steer clear from featuring anything other than English language ads in this little corner of PH, mainly because old car ads are obviously at their most enjoyable when the majority of our readership can understand what they’re banging on about. But for

, we’ll make an exception. Firstly because the narration comes a firm second to the splendid visuals, and secondly because it isn’t all in Japanese, as we’ll come to shortly. 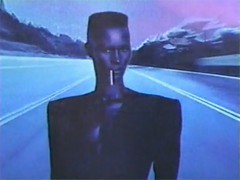 Grace. And a blue road. Obviously.

Firstly, though, the main protagonist: the Toyota Celica Supra, or XX as it was badged in its home market. In addition to the 176hp 2.8-litre six-cylinder we got over here, the JDM car also got a choice of 2.0-litre naturally aspirated and turbocharged six-cylinder engines, with the latter giving 160hp. Mind you, judging by the succession of static shots, a sense of power and performance wasn’t exactly the first thing on the minds of the ad agency bods that came up with this cracker.

Grace Jones, however, clearly was. A strangely immobile Grace Jones, too, as though her agent said to Toyota’s ad men “Is that all the budget you’ve got? OK, well here’s a publicity shot of her; you’ll have to make do with that. Now beat it; I’ve got to call Broccoli back about ‘A View To A Kill’”. First, her silhouette materialises over the top of some psychedelic, cut’n’shut footage of a highway. Just because. Then she’s lurking in the darkness. Then the top half of her torso’s juddering backward down another psychedelic highway. And then her cigarette-clinching lips loom large in the Celica’s rear-view mirror. Disturbing. 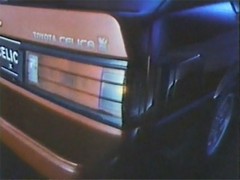 Oh look, some semblance of a normal car ad...

And then, suddenly, English. Yes, seemingly from nowhere, the narrator bursts into a tongue recognisable to us uneducated luddites here at PH Towers. Why? We’re not really sure. In fact, to be frank, we've absolutely no idea why anything happens in this ad. It just... sort of... does. And that it happened at all is a thing that brings us a little bit of joy on this sunny Tuesday morning.