A708 Moffat to Selkirk: My Dream Drive

The Highlands aren't necessarily the best place to drive in Scotland, as the A708 proves 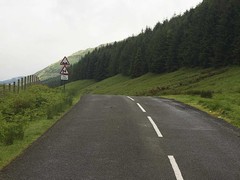 From the spa town of Moffat, the A708 spears diagonally across border country to Selkirk. For anyone heading to Edinburgh from the west of England, it forms part of a wonderfully rewarding and scenic alternative to the M74/M8, or taken on its own merits, it's a classic drive that dilutes the magic of the Highlands into a truly iconic stretch of road. Options to turn it into a loop are many and varied and, at 35 miles, there's more than enough room to stretch your legs.

Why it's a dream drive:
Hills and lochs, just a scattering of remote dwellings and a remarkable sequence of dips, crests and bends; need I say more? The Scottish Borders is frequently forgotten when debating Britain's best driving roads, but the A708 has to rank among one of the most testing stretches of Tarmac anywhere in the UK. There are technical challenges aplenty and it's riddled with awkward depressions and cambers that'll quickly separate the men from the baeys when it comes to chassis dynamics.

It was in fact a drive down this road that formed the impetus to finally spend some time adjusting the damper settings on my S1 Elise. Now, with softer suspension I have a far closer affinity with the handling and a car with immeasurably better road manners. More recently, I tackled it in the PH Fleet Clio Renaultsport 200 Turbo - and, although it was a completely different experience, it was one that shone a very bright spotlight on its impeccable, rally-inspired dampers. 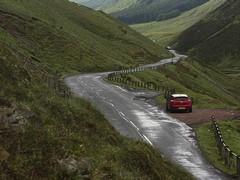 It's an hour without stops. A very good hour

Whatever your chariot, the A708 gradually ramps up the pace and difficulty, allowing ample time to get the fluids warm and the blood pumping. From Moffat it's lined with stone walls and hedges, which restrict vision and encourage a sensible tempo. Overhanging trees and narrow pinch-points further temper any early over-enthusiasm, so it's best to just settle in and enjoy the surroundings at first.

Soon enough, though, the vegetation falls away and the sightlines improve. Smooth, freshly laid Tarmac is a delight, but it's draped over a landscape that has been left virtually as nature intended. That means you roll with the plunges, float with the humps and continuously weave in and out of wee burns and clefts as it contours along the side of a valley.

After topping out at 338m, the undulations and cambers begin to iron out and the road descends into a long section of sweeping bends. Now you're hugging the shoreline of St Mary's Loch with the light flickering on and off as dense forests close in on the verge. Back out into the open and the road begins to buck and writhe once more. You'll reach a crossroads at the Gordon Arms Hotel; time to make a decision. Continue straight on to Selkirk, turn right for a brilliant, deserted, singletrack-to-double B709 to Lockerbie or head left for Innerleithen, Peebles and on to Edinburgh. Whatever choice you make, you won't be disappointed. 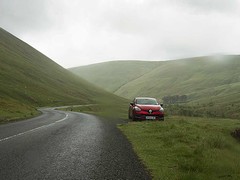 You won't find much other traffic up here

It's hard to single out a few bits when the whole stretch from Capplegill to the Gordon Arms Hotel is so brilliant. But the parts that leave the biggest impression are the series of yumps and bumps west of St Mary's Loch (equally, try not to leave an impression on the road with your sump!) and the lengthy run alongside the loch itself. On a rather more emotional level, the feeling of flow delivered by the lochside section is also something special.

There are barely any houses on the route, side roads are virtually non-existent and the area has fewer signs of life than the Marie Celeste. What traffic there is can be safely dispatched on the numerous and well-sighted straights. Just keep an eye out for sheep and farm traffic. Other than that, I can't think of a single bad thing about this road.

Sights, stop-offs and diversions:
An obvious place to split the drive is the Glen Cafe between St Mary's Loch and Loch of the Lowes. For a more involving diversion, continue past the café for a few kilometers before turning left onto a single track road. This heads up to the beautiful Megget Reservoir and spectacular Talla Reservoir, at which point, faced with such a stunning landscape, you'll probably ask yourself why the Highlands get all the attention.