Why have just one Christmas Dream Drive from across the Atlantic when we could have two? Cue the RV... 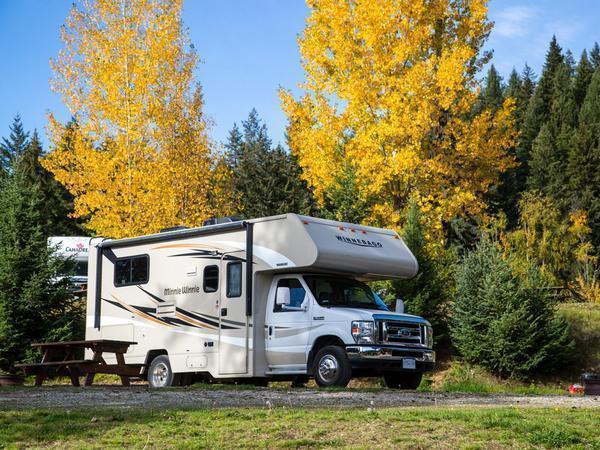 The route:
You can fly almost anywhere in the world these days for around £500 return. My partner and I wanted to go on a big adventure this year but with so many countries to choose from, the decision was a real struggle. Yet, for as long as I can remember, I've always wanted to go to America. So naturally, we booked a trip to Canada.

I can't quite place where my inspiration to hire a recreational vehicle (or RV, to those in the know) for two weeks came from; it certainly wasn't Breaking Bad. Yet for more than a year I'd been dreaming of a trip in a Winnebago and going on a bear hunt. With my camera, I hasten to add. Affectionately named Minnie Winnie, our RV transported us 2,315km across British Columbia from Vancouver to the Rockies and back again.

After what felt like days of research and planning, we booked our RV with Happy Holidays, who couldn't have been more helpful when it came to advice for our trip. There are some fantastic sites to use for route planning, and ours was based on a 1,950km route on hellobc.com.

With 12 days to drive the suggested 7-10 day route, we were in no rush and averaged around two hours driving a day when needed, but none at all on others. We picked up Minnie Winnie from Happy Holidays just outside of Vancouver and took the Sea-to-Sky highway (99) north to Whistler. They have the best road names in Canada; my favourite that we drove on has to be 'The road of Golden Dreams'. Sure beats the M25.

The route was largely planned around sightseeing spots, with overnight stops at campgrounds. Contrary to what you might read in some places, you cannot just park up anywhere you like overnight in an RV, so you'll need to plan where you're going to stay. Even being off-peak most campgrounds were busy, so it would be essential to book if you're travelling in the summer.

After our first night in the popular ski town of Whistler, we carried on to Clearwater, an unspoiled area filled with breathtaking waterfalls. After a spot of white water rafting we headed up the Clearwater Valley Road, basically built by the Canadians purely for us tourists to enjoy the local scenery.

It was at this point that we had our first rather odd sighting. Driving up to Helmcken Falls, we passed a rather large group of people at the side of the road. Focusing on driving, my partner Jo glanced across and commented it was a bit odd they were all staring at some cows. Thinking nothing of it, we carried on as we were. It wasn't until we were coming back down the road, with yet another group of onlookers, that we realised the cows were in fact bears. Little brown grizzly bear cubs to be precise. Seeing bears in the wild unexpectedly is simply incredible and hard to describe; I was subconsciously waiting for David Attenborough to pipe up over the radio and give us a running commentary as if we were watching Planet Earth.

From Clearwater, we continued to head north into the Mount Robson Provincial Park, crossing into the province of Alberta. At sea level, Vancouver was a very mild 15-16 degrees but the further we climbed, the colder it became with temperatures well below freezing at night. After reaching our most northern point at Jasper, we started to head southeast on the Icefields Parkway; touted by many as the most jawdropping road in all of Canada. They're quite right.

Following a stop off for a trip up a glacier we followed the Parkway all the way down to Lake Louise, when it started to snow. The plan at this point was to head to Banff, but due to the forecast of temperatures dropping below -10 and 40cm of snow, we cut our stay in Alberta short and took the Trans-Canada Highway west to Revelstoke and back into BC. We had planned to spend three days in the area but we actually managed to see everything with just one, so we were able to add a trip to the Okanagan wine region with the days we saved.

Temperatures steadily rose as we headed south on the Okanagan Highway towards Kelowna, where we were grateful to not need to sleep in jumpers and beanies anymore. We picked up the Coquihalla Highway which led us to Bridal Falls, ahead of our final leg back to Vancouver.

Why it's a dream drive:
We are blessed with many fantastic driving roads in the UK, but as they're so accessible, it's easy to take them for granted. Getting on a plane and flying nearly 5,000 miles to drive through the most vast and picturesque country I've ever visited is what makes it an epic adventure and a dream drive. We drove through desolate dusty canyons, hundreds of miles of rich colourful trees to the tops of mountains surrounded by snow. The best way I can describe it is like Scotland on steroids. The skies, lakes and trees were so colourful they looked like they had been photoshopped.

I'm not going to pretend the roads are exciting there, though. Whilst there was definitely part of me that would have preferred to be in a Mustang or a Challenger, we never really came across any twisty roads when I felt I was really missing out. You make the trip for the beauty and landscape, rather than incredible driving roads. In fact, it's hard to imagine how anyone can have an accident there given that the roads are mostly long straights and probably twice the width of our A-roads. Yet every now and again there would be a huge decorated memorial in the verge as a reminder to never take yours eyes off the road.

My only criticism of Canada, if it really can be one, is that it's too bloody big. It was great to explore as a tourist, but to live there must be frustrating that it takes so long to get anywhere. We chatted to a local at one of the lakes we visited who had travelled four hours to get there, and that was considered a short journey. It was her 'local'. The land mass is more than 40 times the size of the UK, yet its population is nearly half. We even drove into another time zone, to put it into perspective.

Highlights and lowlights:
I'm a typical awkward Brit who makes a vague attempt at trying to learn some of the local language when I go abroad, but who fails miserably at speaking it. So it was quite a novelty to go so far away, but still be able to speak English. The first two days in Vancouver were mesmerising with huge trucks, Mustangs, Challengers and Camaros everywhere. Even if you couldn't see one, you could hear the echo of a V8 rumbling in the distance.

Another perk was that we didn't see a single speed camera on the entire trip. Either that, or they're well disguised. Not that it mattered, as I was hauling around a 4.5 tonne RV with a very, very thirsty 6.2-litre V8. An average of 11mpg and a 610-litre tank thirsty, I'll add. I've driven big vans before, but this thing was a whole other level. I have a new found respect for HGV and bus drivers after the stress of getting used to the weight over the course of the first day.

On the subject of HGV drivers, many of them drive like lunatics in Canada. I'm not really used to holding people up, however I was religiously sticking to the speed limits; still, lorries would come flying past as if we were standing still, even in the snow. And they make our lorries over here look like Tonka toys.

Sights, stop-offs and diversions:
Time of year to travel is a biggie, as RV hire is nearly three times as much in the summer than that of the shoulder seasons, either early spring or late autumn. We opted for the latter, to make the most of the cheaper hire rates, quieter tourism and to maximise on the vibrant autumnal colours and the snow beginning to fall onto the mountains. Without a doubt, we picked the best time to travel with rich hues of green, yellow and orange everywhere we went. Apparently it can rain just as much in June as it can in September, and we had just one wet day out of the 14 we spent in Canada.

You can't travel to Vancouver and not spend time wandering its streets, so we spent our first two days exploring the quaint coastal city whilst we acclimatised and got over our jet lag. If you've ever heard the rumour that Canadians are the friendliest people you'll ever meet, it's true.

If you like lakes, waterfalls, mountains and breathtaking scenery on an epic scale, then this is the trip for you. As long as you don't mind the prospect of bumping into a bear when you're out for a walk. Places you just absolutely have to visit (in order) are Whistler, Joffre Lakes, Clearwater, Moul Falls, Spahat Falls, Helmcken Falls, Mount Robson, Kinney Lake, Jasper, Athabasca Falls, Icefields Parkway, Peyto Lake, Lake Louise, Moraine Lake, Okanagan Valley and the Othello tunnels.

We arrived at the majority of our campgrounds in the dark, to be told to watch out for the bears that had been spotted earlier in the day or week. Luckily for me, I was driving the RV. Unluckily for Jo, she had to get out in the dark and back me into our space and try not to get distracted by the rustling in the bushes. Turns out we were also there during elk mating season, so we got to witness a fight between two stags as they wandered around our campground in Jasper. Another Planet Earth moment.

We met some incredible people along the way and made memories to last a lifetime. If you've ever thought of doing a similar trip, I can wholeheartedly say just get on and book it; you won't regret it.