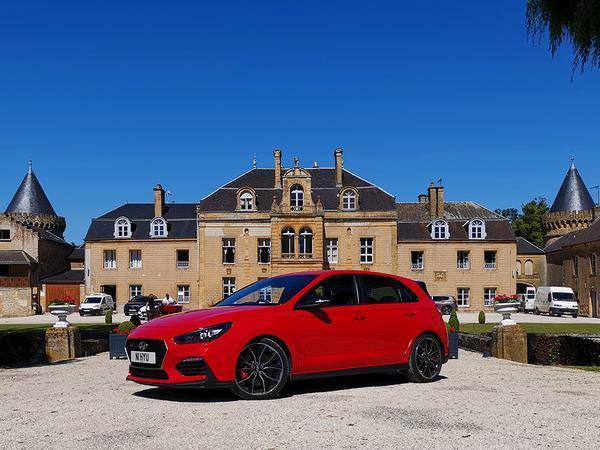 The Nurburgring 24 hours is over for another year, but what a thing it was. I'd heard many tales of just how spectacular the bonkers endurance race is and, having now had the chance to see it for myself, I can only conclude that it is unquestionably a thing of beauty. With a starting grid of 160 machines, ranging from a fantastic Opel Manta (which has become quite the N24 mascot), right up to Manthey Racing's Porsche GT3 car, the difference between the classes inevitably leads to plenty of thrills and spills. The terrifying closing speeds, famously merciless circuit and unpredictable weather not only highlight the skill and nerve of all drivers involved, but also hark back to the good ol' days of motorsport - with the added benefit of modern safety systems, of course. Watching a plucky Hyundai i30 N squeeze an Aston Martin Vantage out of the way on Brunnchen is genuinely hilarious.

All of the above, plucky i30 N in particular, is why Hyundai invited us along to experience the weekend with them. The race isn't the only thing calling us, though - the fantastic route there being worth the journey in itself. Okay, so the first stint from London and through France is unequivocally tedious, but the second leg is where the fun begins, so let's pretend that's where things kick off...

The small French commune of Donchery is where we find ourselves; the beginning of the route being a mighty test for Hyundai's first hot hatch. As we head north on Rue De L'Atelier, then up into Belgium and through Corbion, the roads outside of the towns are bumpy and broken, the corners are blind and tighten mid bend, and the odd rock sits in the road from the neighbouring hillside. But the i30 N takes it in its stride - with the right buttons pushed.

As you'll know from previous tests of this car, the i30 N offers a variety of driving modes to suit the road (or your mood). For these routes, full N Mode is too much; the ride being headache-inducingly firm. So the sweet spot - unknowingly shared with others on the trip - was N Custom. Here everything can be set to sport, which means the steering firms up, the E-LSD provides that tug out of the corners you so desperately want on roads like these, the exhaust crackles like a bowl of Rice Krispies and the throttle response is sharper, but those rock solid dampers remain in normal, retaining some degree of pliancy. Rev matching can be manually disabled (or enabled) via a little button on the wheel, which does a mighty fine job of making you look like a pro - but does feel like cheating if you've spent countless hours trying to get your uncoordinated feet to heel and toe.

With the car in its optimum driving settings, and the roads into Belgium becoming increasingly glorious, it's hard to think of many alternatives that would be more suited to this journey than the i30 N. A second gear pull out of a tight hairpin and upshift to third delivers a loud crack from the exhaust, and barely sees you hit 60mph, but the smile it induces says otherwise. The low speed fun factor, which seems to be harder and harder to find in today's modern metal, is ever present in the Hyundai. It feels adjustable, grippy and extremely capable - a mix that, with some almost Subaru-like engine noise coming into the cabin, and the pops and bangs from the rear, has me feeling like a rally driver as I tear through the trees approaching Bouillon.

With Bouillon behind us we head back onto some slightly more sedate roads, giving the car (me) a chance to catch its (my) breath as we hop onto the N89 north, then north-east towards Bastogne. This provides an opportunity to appreciate the car's Jeckyll and Hyde personality, popping it into Eco closes the exhaust flaps and elongates the throttle response to make for a perfectly adequate motorway cruiser. Clearly a hot hatch isn't going to be the most refined long-distance companion, but it is completely liveable, and more than makes up for it with the fun factor its other personality provides.

Leaving Bastogne behind, we join the N874, leading us into Luxembourg towards Clervaux - the N874 ends as you enter Luxembourg, where we took the N20, joined the N12 for a short period and then exited the roundabout at Antoniushaff to join the N18 (Route De Bastogne). The N18 is a gorgeous stretch of road, with great visibility, smooth and relatively little traffic. Then, leaving Clervaux, it becomes more hilly and surrounded with trees, providing a more technical challenge. This is a dream drive for a reason...

After the stunning N18, there were road closures on the normal route in Marbourg, but a lovely, twisty detour brought me out where the closed N10 would have done, on what I think (after some tentative Google mapping) was the CR342. That concluded our time in Luxembourg and we were onto the final stint in Germany!

The final 80km began on the B410 towards Neuenweg. The i30 N felt as at home as ever on these wide fast roads and did so throughout its entire journey through Germany - eating up Autobahns while remaining an absolute joy in the tricky stuff. Germany's roads are renowned for their smoothness, in fact I'm not sure I saw a single pot hole during my entire time there, which provided some comfort after a long journey. The quality of the roads highlighted that the standard Pirelli P-Zero tyre fitted to the i30 N can be quite noisy on the wrong surface, so I wonder if a change would remedy this - has anyone swapped the P-Zero out?

The final few miles were claimed by traffic due to the race, unfortunately, but their slow movement allowed me to appreciate the incredible countryside that the Nurburgring is set in. The drive was over, but luckily the fun was only just beginning. If you've ever considered attending N24 then I wholeheartedly recommend doing so, and if you fancy following the same route I did, then all the better. You can find it here.