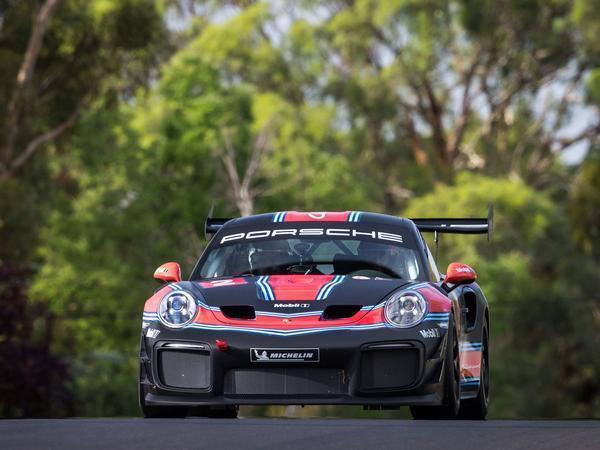 Remember the Porsche 911 GT2 RS Clubsport that was revealed late last year? The track version of the twin-turbocharged supercar has now been given a fixture to compete in a one-make sprint during the weekend of the Spa 24 Hours, meaning a whole field of the 700hp racers will be let loose up Eau Rouge in July.

Perhaps even more exciting is the prospect that this race, which is being organised by the London-based SRO Motorsports Group and has been sanctioned by the FIA, is effectively a prelude to the introduction of new GT2 regulations. Although not yet finalised, the regulations should bring extreme performance GT cars with 650hp to 700hp back to the grids of major international endurance championships.

The GT2 RS in track-adapted Clubsport specification is conveniently similar to what the FIA hopes its future GT2 cars will be like, so the homologation of the Porsche supercar and success of its race event should have a direct impact on the machines we see competing in the future class. While it's not yet officially race-ready, the GT2 RS Clubsport has successfully completed on-track testing, and has demonstrated its abilities during a demo run with Mark Webber at the recent 12 Hours of Bathurst.

It's fair to say that the carbon-bodied Clubsport looked as at home on the asphalt of Mount Panorama Circuit as the proper 911 GT3-R racing cars that took to the same layout shortly after. Of course, with such an extreme specification out of the box (more on that below), it really ought to...

Well, if the new 992 doesn't float your boat, then this old/new 991.2 just might. We've already talked about the Clubsport Package that can be optioned for a GT2 RS this month - this ain't that. Instead it's the first look at the car Porsche is describing as 'near standard but spectacular' - the GT2 RS Clubsport.

In what is presumably a last hurrah for the seventh generation of 911, Porsche will build 200 examples in lightweight, track-only spec. In addition to some of the features mentioned in the add-on pack, Porsche has confirmed that the distinct model will get fully switchable ABS via a dial on the centre console, a removable carbon steering wheel with colour display from the GT3 R racing car, a "massive" - their words - roll cage and an equally substantial 115-litre fuel cell, refillable through the carbon reinforced plastic front bonnet.

In fact, there's CFRP everywhere, with it used for the rear spoiler, roof and rear bonnet. Combine all that with the FIA-approved seat, harnesses, air jack system, three-way adjustable racing dampers, Michelin slick tyres and 18-inch forged wheels and it's clear this is a pretty serious upgrade. This even extends to the colour, white announced as the only one thus far - perfect for applying a livery too.

You may mock, but Porsche is serious about racing the car. "For the upcoming years, our customers will not only race the GT2 RS Clubsport on track days but also at international motor racing events. We are currently holding very productive talks with the race organiser SRO," says Dr Frank Walliser, Vice Pres of Porsche Motorsport and GT cars. So maybe they won't all just be holed up in collections...

With a spec and an aesthetic like this, it would be great to see some Clubsport racing on tracks around the world. Even if one in 10 of the 200 customers thinks it's a good idea, that's a 20 car grid. Of 700hp Porsches. Sounds alright, doesn't it? Those 200 will have to pay 405,000 euros plus local taxes, mind, which is roundabout double what you'd pay for a standard GT2 RS. Expect with deliveries to start next May. Perfect time to start racing. And empty a trust fund.