Stuttgart's sleeker Cayenne will pinch engines from its sibling, including the Turbo's 550hp V8 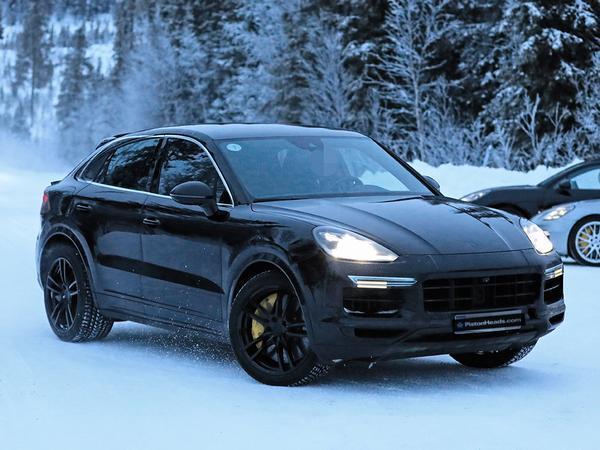 Porsche is busy finalising the setup of its first Cayenne Coupe before the model's global launch in early summer. Seen here winter testing in Sweden, the sleeker version of Stuttgart's biggest car will rival BMW's X6 and Mercedes-AMG's GLE Coupe and pinch engines directly from its less raked SUV sibling.

That means the coupe is due with the 440hp and 550hp versions of Porsche's 2.9-litre V6 and 4.0-litre V8, as well as the plug-in hybrid that's based around the V6. No diesel is due because Porsche doesn't use diesels anymore. It announced at the tail end of 2018 that development of an oil burning Cayenne had been halted amid changing market demand.

Today's sighting is of the fastest model, the Coupe Turbo, as is evident with the set of yellow brake calipers that signal it's running with carbon ceramic discs. The last time we saw a Cayenne (see below) it was a Cayenne S at the Nordschleife running with its extended retractable rear wing poking out. The Turbo's remains tucked away, showing how the part neatly hides within the tailgate.

With minimal changes to its overall design barring that back-end, the performance figures for the coupe variant are likely to be almost identical to that of the normal Cayenne. Our sighted Turbo is therefore likely capable of a 0-62mph time of about 4.1 seconds and top speed of something in the region of 177mph.

The next quickest model will be the E-Hybrid version, which will rival Mercedes's GLE Coupe plug-in and be capable of about 27 miles in pure electric mode. Demand for the hybrid version of Porsche's regular Cayenne surpasses that of the pure V6 and Turbo models, so it's likely the same will be true with the coupe line-up.

If you've ever looked at a Porsche Cayenne and thought, 'well, yes, fine - but I'd like it more with a retractable spoiler', then your luck is in. Because as the latest spy pics show, that's exactly what's coming aboard the new 'coupe' version of the brand's big-selling SUV.

Of course when Porsche says 'coupe' it means a five-door model with a tapered (and slightly less practical) rear end. It is the faster rake and restyled tailgate that make room for a peek-a-boo wing, which was recently displayed in all its dubious glory while testing at you know where.

Unlike the Panamera's much cooler two-piece affair, the Cayenne's spoiler looks to pop-up in the conventional way, and apparently shares its air-fettling duties with the slightly smaller roof spoiler above. If you're thinking that's a lot of spoiler for one SUV, then yes, it is - but Porsche will likely be reminding us next year that this is very much a performance variant of an already massively quick car, intended to do battle with the equivalent BMW X6 and Mercedes-Benz GLE Coupe.

As such, it's almost certain to get the heftier 440hp and 550hp variants of its maker's 2.9-litre V6 and 4.0-litre V8, but not the (forthcoming) diesel lump. Aside from the slightly more 'sporting' profile, you can expect the rest of the model to resemble the conventional Cayenne - saving the price tag, which will doubtless feature a hefty premium.