A ride will never be as good as a drive, but who'd pass up a chance to experience the new GT4? 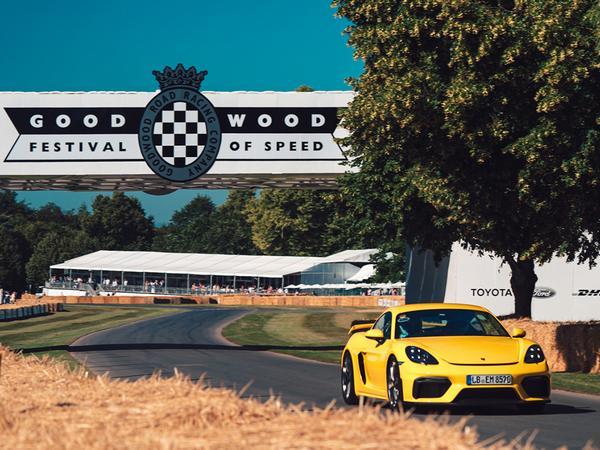 The 2019 Cayman GT4 might have a new 4.0-litre engine and comprehensively revised chassis setup, but few would describe it as anything more than a thorough evolution of the old car. The last GT4 was so lovely to steer, so engaging and so wonderfully in tune with your inputs that any drastic alteration would have been wholly unnecessary. Yet still, even in the company of ultra-rare exotica, the new GT4 that PH gets to ride in at the Goodwood Festival of Speed is garnering as much attention as the 935 parked beside it. It doesn't need to shout; people are just excited about the GT4.

Still, this new car, with its bored-out and naturally aspirated version of the present 992 turbo engine, must be sublime to make even a slight improvement on its predecessor. And it really needs to do that in order to restore some credibility to the Cayman nametag, which has suffered under the introduction of the ill-received 718 flat four motors. As our yellow GT4's flat-six fires up, there are smiles both inside and outside the awning as people all collectively enjoy the tone. There's nothing quite like a Stuttgart flat six, is there?

With 420hp and 310lb ft of torque produced by the Porsche's 9A2 Evo powerplant, there's a healthy 35hp advantage over the old car on offer. And while an 8,000rpm redline can't compare to the Speedster's GT3-sourced 4.0-litre and its 9,000 limit, we doubt many will care in a Cayman that has three pedals and a manual gear lever. Our driver, former Britcar and British GT4 champ Ross Wylie, knows his way around Porsches thanks to a season in Carrera Cup GB. But this is his first go in a GT4 and his first run up the Goodwood hill since last year, so let's not expect anything too fast, shall we?

Thing is, pro drivers are a different breed from the rest of us, so as soon as we're at the front of the Supercar Paddock queue and the marshal waves the flag, Ross has us charging towards the first turn as if he knows nothing else. Can you notice the extra grunt from the passenger seat? It's impossible to tell subjectively, obviously, but rest assured this GT4 is rapid to get going and the mid-range feels strong. It's also clear this is a motor that likes to rev as just before Ross hits the brakes it seems to find a second wind.

The way the GT4 reacts through the next bit feels indistinguishable from the old GT4; the nose dips only slightly with Ross's hard hit of the middle pedal, then the car hunkers down as he angles it right. It's all subjective again, but the GT4 feels almost race-car like from the left seat and Ross even comments later that the steering is very responsive to make the front end feel ultra-eager. Again, all former GT4 traits, but with real potential that things have been ramped up five or ten per cent with Porsche's chassis improvements.

Indeed, Ross is so confident in what's beneath him that's he's back on the power in what he later described a "linear fashion" - we'd see it as stamping back on the throttle. The limited-slip differential behind, now aided by torque vectoring, duly responds and those rears bite into the surface beautifully. Ross reckons his decision to not change down into second meant that our exit was compromised; we exit at 4,000rpm and the car powers out intently, but there's clearly lots more to be had at the top as the thrust builds and builds.

We fire under the bridge, flat six behind making all the glorious sounds we've missed so dearly from the 718 range until now, before Ross is hard back on the brakes. There's so little rock from the body as the dampers are quick to tense, meaning at the first stroke of steering lock the car feels beautifully loaded up from the passenger seat; it must inspire much confidence on the other side as Ross's first ever GT4 run through Molecomb is taken with a scary (for yours truly, anyway!) amount of commitment and he's back on the power long before the hay bales have passed our vision. Traction is brilliant and the engine really does spin enthusiastically towards its redline. Without a back-to-back in the last GT4, we can't decisively say things are better, but rest assured the new 4.0-litre feels very good.

There is, however, one teeny, tiny thing. The engine doesn't sound quite as vocal as the old 3.8. Perhaps it's the noise-reducing influence of a race helmet, but the tone in the cabin certainly feels like it's a few decibels lower than before. And the exhaust note from outside also sounds a little smoother, lacking the endearing gruffness of the old flat six at low revs that made it sound like a proper race car at times. Is this the impact of a particulate filter? Perhaps so. But, then again, the Goodwood paddock and hill climb are probably not fair places to test such a thing; there are enough unsilenced V12s around to alter the context a bit. So let's cut the GT4 some slack for now. First impressions are good - very, very good.