OK, so the price is hefty but mega barges don't come much more mega than this 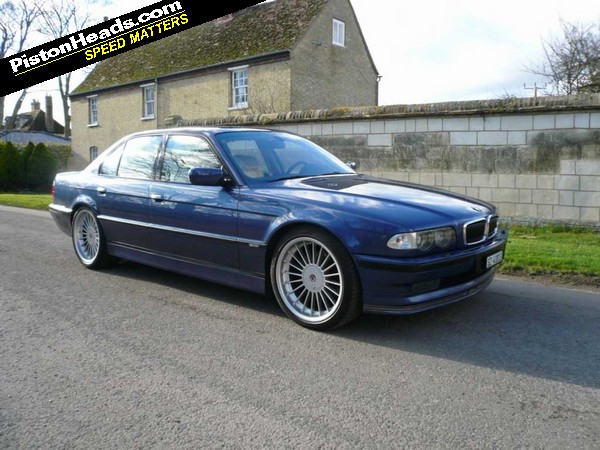 If Tomorrow Never Dies tarnished the reputation of the E38 BMW 7 Series, the first Transporter film brought redemption. A very angry (as always) Jason Statham, a very black 735i (reputedly with 750i running gear) and some stunning French scenery made the old Seven appear very cool indeed. 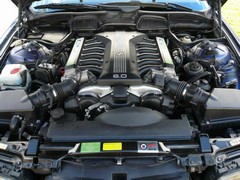 You can never have too much of a good thing, etc

Although if Frank had ever found the standard BMW product a little too underendowed, he would have done well to procure himself an Alpina. The stealth factor would be maintained, along with a chunk of extra performance out-of-the-box.

This B12 would fit the bill perfectly. Ostensibly based on the E38 but thoroughly enhanced by Alpina, it would make an excellent autoroute express for a professional, er, businessman in a hurry. 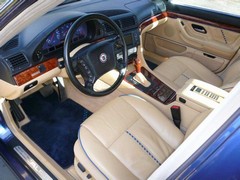 Opulent and just about the right side of garish

Still looks amazing, doesn't it? Perhaps it's those classic turbine wheels, the Swiss plates or the Alpina blue paint, but the B12 still exudes an elegant menace nearly 15 years after it was first seen.

The interior still appears as sumptuous and tasteful as the day it left Buchloe too, dubious striped accents notwithstanding. The trademark Alpina blue dials feature, as does a contemporary in-car phone with a screen the size of a postage stamp but a length comparable to a shoebox. Anyway, technological advances aside (that sat-nav display must nearly be matched by a modern smartphone), the B12's interior looks to have brushed aside the previous 97,000 miles with disdain, primed for many more.

Without a speed limiter, the B12 6.0 is said to be capable of 180mph, which should come in jolly handy when stuck behind the hoi polloi of German saloons on the autobahn. Then it would probably need more fuel; Alpina's combined claim for this B12 was 15mpg... 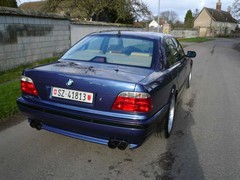 But think of all the cash saved through depreciation over a newer model that could go towards fuel, right? Well, kind of. To be honest, a salary not far away from Jason Statham's himself would be required to justify the €35,000 (£30,000 on the dealer's website) asking price of this

Moreover, such disparity simply doesn't exist between other Alpinas and BMWs. This Alpina B6 cabrio is more expensive than its BMW M6 equivalent, but by a more palatable £5,000. A D3 Touring can be found at a similar price to a 325d wagon with similar mileage but a slightly older numberplate. And £6,000 offers the choice between a dealer-supplied Alpina B10 V8 or a private E39 M5, both with less than 100,000 miles.

So making a rational case for the B12 is hard. The fact it's left-hand drive hasn't even been mentioned yet... Even as Alpinas go however, it's massively rare, hugely desirable and, lest we forget, equipped with a 6.0-litre V12. At £30,000, we suspect it may be in the classifieds to be ogled for a little while yet.