Home/Regulars/Spotted/Audi Q7 V12 TDI: You Know You Want To

As we all know, stereotypes are nothing more than a lazy shorthand based on rumour, negativity and - often - outright slander. That said, as a breed, Audi Q7 drivers do seem almost universally determined to reinforce in the minds of observers a reputation for fearing little and respecting less. 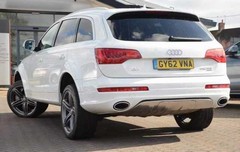 Jacked up for pics, like it needed to be

Except, maybe, for this. Because in a world where SUV buying has long since turned into an arms race, the Q7 V12 TDI is pretty close to being the biggest, bluntest weapon of the lot. It's the guiltiest of guilty pleasures - even admitting a sneaking regard for a car like this is likely to get you ostracised from polite society. But if you're going to buy a huge, sod-off 4x4 then why not get the sod-offest of the lot?

Although the V12 looks superficially like the sort of common-or-garden Q7 that you'll see bump parking outside the local prep school at chucking-out time, it's actually an extremely exotic beast. For a start, this is the only 12-cylinder diesel engine that's ever been fitted to a production passenger car, a USP that looks future proof now that even Bentley admits any future compression-ignition powerplant would be based on the smaller Audi V8. 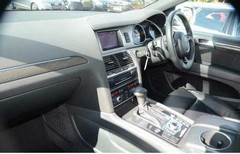 Fully loaded and so you'd hope for £100K rrp

And there's some proper racing heritage, too - for the engine at least. The 6.0-litre V12 shares its fundamental design with the engine fitted to the Le Mans winning R10 TDI, and Audi gave serious consideration to putting the same motor into an oil-burning R8, going so far as to build a concept prototype. Even six years after it was introduced the Q7 V12's output still looks serious: 500hp and a frankly preposterous 738lb ft of torque. Audi claimed a 5.5-sec 0-62mph time and a 155mph top speed; this in a car that weighs 2,635kg. Other modifications included a wider track and revised suspension, plus ceramic brakes as standard.

The numerical shock-and-awe extended to the pricetag, which was nearly twice as much as the V8 TDI. This car would have listed at £100,370 before options back in 2012, the last year before the model was quietly withdrawn. Despite that, sales weren't quite as limited as you might expect - there are two others in the PH Classifieds at the moment. This one is being sold by an Audi dealer and comes with a used approved warranty. That said, it's still £700 more than a brand new 4.2 TDI S-Line Sport, the car that now sits at the top of the Q7 range. And which, presumably, the V12 can bully out of any overtaking lane it finds itself sitting behind in.

And although 12-cylinder diesel engines might have been a blind alley, the V12 TDI's modest success - and immodest pricetag - were undoubtedly factors in persuading other manufacturers to sign off the plethora of £100,000-plus ultra-luxury SUVs that are set for launch in the next few years. That makes it either a car ahead of its time, or the epitome of evil incarnate, depending on your point of view. As one PHer responded to its introduction back in 2008: "That is obscene. I like it."

AUDI Q7 V12 TDI
Price: £64,995
Why you should: You want other SUVs to respect your authoritah
Why you shouldn't: Everyone will hate you.