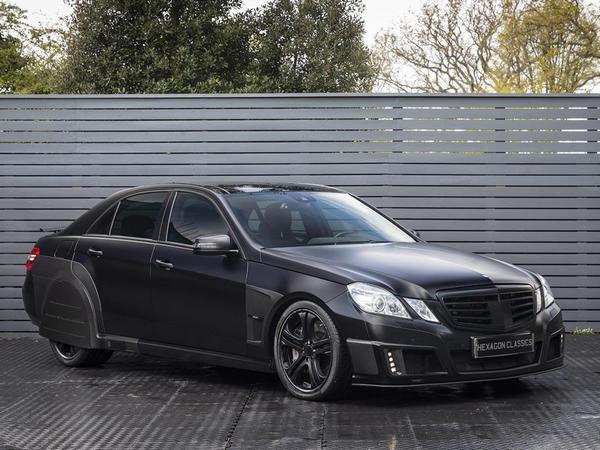 All Brabus Mercedes are silly; there have been V8s in SLKs, tuned Smart cars, power kits for pickups and all manner of G Wagen witchcraft. Some, however, are even sillier than the rest. Which makes them borderline barmy - welcome, then, to the Brabus E V12.

Ten years old this year, the E V12 marked a new high point of hi jinks for Brabus. Taking the already punchy W212 E63 AMG as its base - the one using the old 6.2-litre warhorse of an engine - Brabus took a V8 out and put an even larger V12 in. An encouraging start; that 6.3-litre V12, itself a bored-out version of Merc's famed 6.0-litre, was then turbocharged. Twice. You can see where this is going...

The end result was 800hp, which doesn't seem all that exceptional nowadays, but a gargantuan 1,047lb ft of torque. That's more than twice the torque of an AMG C63; y'know, the twin-turbo, 4.0-litre V8 super-saloon. Madness. The torque was so prodigious, in fact, that it had to be limited to a mere 811lb ft - tsk, etc - to prevent the five-speed auto from exploding into a million pieces.

But more than that, Brabus set out to make the E V12 a record breaker, efforts at improving performance going beyond simply generating the most power all component parts could handle. Wider tracks gave it increased stability at speed, and an aero kit, including those incredible carbon rear wheel cowlings, helped it carve through the air. 124mph was reached in less than 10 seconds, and 186mph in 23.9; the top end was a claimed maximum of 230mph, improving on the Guinness-verified 227.2mph of the W211 version that made do with just 730hp. Braking was taken care of by enormous discs with six-piston calipers at the rear and 12-pot(!) items at the front.

Just 10 E V12s were made following a debut in September 2009, each costing €600,000 - more than half a million pounds back then. We'd assume that they were sold in Europe or further afield, given the left-hand drive and the E V12's suitability for going really very fast, but here we have one for sale in the UK. At £150,000 it's a lot less money than it would have cost the original owner 3,000 miles ago.

Sadly there's not much else in the advert about this car's history, it instead listing equipment like the 'Brabus high-performance limited-slip differential' - who'd have thought - the heated rear seats and the television tuner. That said, the E V12 is a car that speaks for itself quite a lot better than most. The vast majority won't get it, seeing an E-Class with some questionable carbon add-ons; the few in the know will see one of the most exciting (as well as rarest) cars ever to come from a company renowned for creating the maddest Mercedes around.

Alternatives? Precious few. Brabus has put the V12 in other saloons, though arguably without the mystique of this E V12. Or you could spend this sort of money on a G-Class. Amazingly it isn't the only £150k saloon with loads of power currently available, though, this Jaguar XE Project 8 surely making up for its 200hp power deficit with far greater dynamic finesse. But, again, they're probably not comparable.

In fact, as the advert states, this is probably one for the dedicated Mercedes collector, the E V12 there to sit alongside various Black Series cars, the AMG specials from before it was part of Mercedes and whatever SL derivatives that are also in the hanger. By being a bit ostentatious, grossly overpowered and relatively unknown, the E V12 arguably sits in the tightest cul-de-sac of niche appeal; for those who understand the charm - certainly not hard to see from here - it looks absolutely tremendous. See you on the Autobahn...