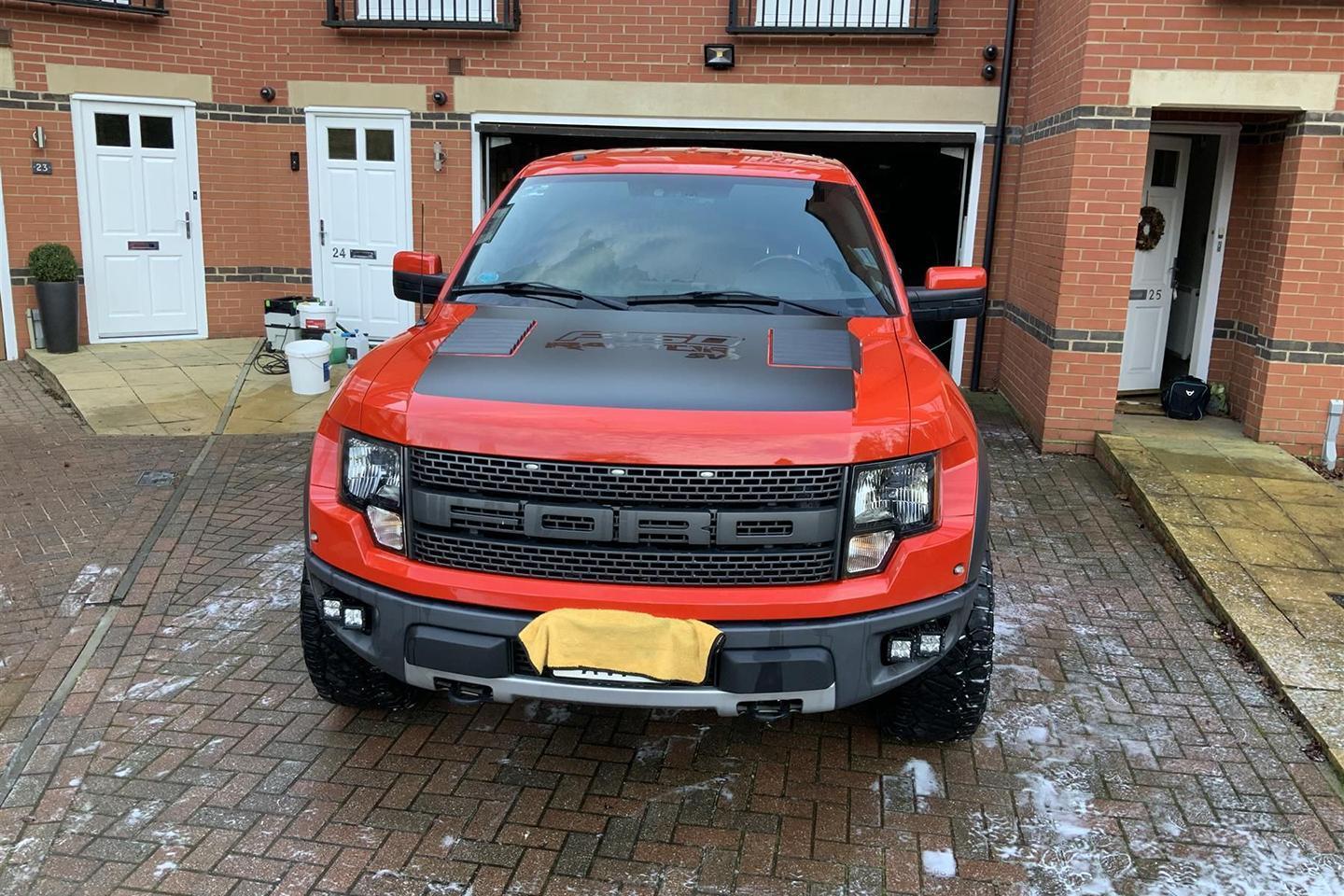 Do you ever play the game of automotive 'whoops, apocalypse'? This is the wholesome pastime of trying to work out which vehicle would be best suited to various catastrophic scenarios. And if the world was to end to the timid whimpering of those hiding from zombie hoards - rather than a sudden thermonuclear bang - can you think of anything better than this week's spectacular Brave Pill?

The more timid and rational are likely to prefer something simpler and easier to repair if things turn all Walking Dead. Vehicles like the infamously unkilleable fifth-gen Toyota Hilux, or the W124 Mercedes diesel that brings the added ability to run on vegetable oil from abandoned fast food outlets as well as scavenged derv. But for anyone planning to sit out the end times with substantial and well-defended petrol reserves, a bright red Ford F-150 Raptor would be a much more compelling choice, especially in tuned 650hp form with the ability to either outrun or drive straight over pretty much any threat.

New ground is being broken here, and not just by the Raptor's 2.8-tonne weight. This is the first truck to become a Brave Pill, largely as we've been waiting for something this awesome to turn up. And yes, the overall level of mechanical jeopardy from a Ford pick-up is pretty slight, even a heavily tuned one. The F-150 is one of the most manufactured vehicles in the world, only the Toyota Corolla pipping it for the number one global namebadge slot. But you still need a serious amount of front to drive something so loud and proud on this side of the Atlantic.

Although the F-150 is one of the world's biggest automotive successes, most of its story can be condensed to a paragraph. Ford launched its first F-series as long ago as 1948 and there have been 14 generations since then. The subsidiary model numbers effectively denote carrying ability, the F-150 badge first used in 1975 and corresponding to a half ton payload. The F-150 has been the backbone of Ford's U.S. sales, and the company's global profits, for most of its existence, more than 60 million having been produced. It's been America's best-selling vehicle for every year since 1981, and last year the Septics bought a scarcely feasible 900,000 of them.

For much of its long life the very idea of a high-performance F-150 variant would have been laughed at: trucks were sold as beasts of burden, for carrying stuff and hauling loads. But by the early 1990s a new trend started to emerge as an increasing number of affluent U.S. buyers looked to combine the utility of a half-ton with more luxury and more speed. It was actually GM that pioneered the go-faster truck, with the 1991 GMC Syclone, with Ford's larger offering arriving the following year in the form of the Special Vehicle Team tuned F-150 Lightning. As launched this used a 5.8-litre V8 making a relatively modest 240hp. A second-generation version, launched after a gap of three years, had been upgraded to 360hp, but it still only survived until 2004 before being dropped.

The SVT Lightning had struck twice, but it hadn't really hit the spot - it was a faster F-150, but despite being lower and stiffer it definitely wasn't the dynamic match for a performance car given the obvious issues of its shape and size. So SVT had a rethink and came up with a concept that would effectively make use of the F-150's mass and ground clearance.

Launched in 2010, the F-150 Raptor was both wider and taller than the regular truck, inspired by off-road racers and with substantial under-body protection, a substantial increase in ride height and trick Fox Racing dampers giving it the ability to smash through hits - and snort bumps - better than Rick James in a '70s disco. The visual makeover was correspondingly macho, with arch extenders, sprayed-mud graphics and a shouty all-caps 'FORD' radiator grille. It was, in effect, a factory-produced version of the sort of lifted and loudened 'brodozers' that modifiers were already being created, but one that could actually deliver at speed.

I never drove a first-gen Raptor, but I have experienced the more recent aluminum-bodied version - a vehicle that doesn't so much roll with the terrain's punches as return them blow-for-blow, and with a remarkable ability to land softly from impressive heights. It was an image Ford was keen to celebrate from the off, anyone who had only seen the official press shots of any generation of Raptor probably unable recognise it on the ground.

What the Raptor wasn't was particularly quick. As launched, Ford fitted the same 310hp 5.4-litre V8 that was offered with the regular F-150, this giving a 0-60mph time of around eight seconds. A punchier 411hp 6.2-litre engine was offered as an option from 2010, with this cutting around a second off the 0-60mph time, and the combination of all-terrain tyres and locking differentials allowed it to get close to that on dirt as well as tarmac.

But for some, that clearly wasn't enough, and tuners were soon working to make the Raptor go even faster. Our Pill is sporting a Stage 2 supercharger conversion of the 6.2-litre engine from renowned Ford-fettlers Roush, one that has added more than 50 per cent to the original output. Even with the equivalent of an African forest elephant sitting on the other side of the scale, that still makes for what should be an entertaining power-to-weight ratio. Entertaining in the same way as a gladiatorial contest must have been.

Having never been sold in the UK, our Pill has arrived here as an import at some point - the seller not saying exactly when this happened. Beyond its heart upgrade the looks almost standard, although it does have a boost gauge integrated into the driver's window air vent. The advert's claim of DAB radio and sat-nav also means it is sporting some kind of aftermarket entertainment system - U.S mapping refuses to acknowledge the existence of anywhere east of Maine. Other modifications include a new exhaust system, upgraded brakes and an XL rear differential to handle the increase in urge. The vendor also claims it has had only one owner, suggesting it was either a grey import from new or was brought over personally by its first keeper.

Rational logic hides under a rock and cowers when faced with a vehicle such as this. The Raptor is large and hard-to-park in the U.S - in Britain it will be longer and wider than most parking spaces, and the seller's images make clear that a standard-height garage is going to struggle to accommodate it. Then there is the additional spatial challenge of having to drive it from the wrong side, and despite its XL dimensions it isn't exactly spacious inside either thanks to the 'super cab' layout and coupe-tight rear space. The load bed is also pretty dinky for something so huge. Not to mention the small matter of what will often be single digit MPG and the difficulty in tracking down less common parts. For the £45,000 asking you could almost get a brand-new Ranger Raptor, with proper hand-drive, a warranty and diesel economy.

But if the fan turns brown, can you think of a better place to be?