Home/Regulars/Spotted/Showpiece of the Week: Shelby Cobra 427

Showpiece of the Week: Shelby Cobra 427

There are no cheap versions of the classic Carroll Shelby built. But some nearly new ones are available for mortgage-size money 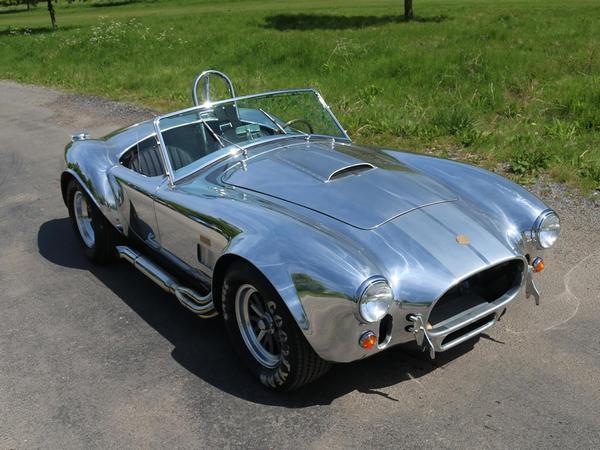 Many Anglo-American creations have achieved great fame. Fleetwood Mac. The Harrier Jump Jet. Winston Churchill. The atom bomb. But few are as romantically satisfying as the merger of England's elfin AC Ace with a V8 engine sourced from Dearborn.

Presiding over the union, Carroll Shelby; the Texan for whom speed mattered perhaps above all else. By 1959 Shelby had won the 24 Hours of Le Mans in an Aston Martin factory car, reputedly driving with a nitroglycerine capsule under his tongue in case his famously leaky heart valve played up - but his racing career was already over. Four months later, at 36, he retired.

The cogs in Shelby's head, though, had hardly stopped spinning. In 1961 he wrote to AC, and asked if they could modify the Ace to accept an eight-cylinder engine. The idea was not completely novel, of course: Shelby himself had driven Allard Motor Company cars a decade previous which married British chassis with imported American muscle - yet the two were never fused together quite so perfectly as when the cutting edge 4.3-litre (and 4.7-litre) Ford Windsor V8 met the Surrey-born AC.

Ford thought so too, and started writing Shelby some cheques to help with the car's development. Less than two years later, the redesigned MkII Cobra appeared with rack and pinion steering - although it was the '65 MkIII, with a stronger chassis, coil springs all-round and the 7.0-litre '427' V8 that provided Shelby American with a bonafide classic.

Factor in the model's low volume production run - just 260 road cars were produced, with fewer than one hundred more intended for competition - not to mention the attrition rate of a car with over 425hp and only four fat radials to keep it on the road, and it's no surprise that original examples are among the most cherished (and expensive) classic purchases that it's possible to make in the States. Second only to their values are the 'continuation' cars, built with official Shelby serial numbers that continue on from where the firm left off in 1967.

Naturally these aren't as historically significant as the ones originally handcrafted in England and then shipped to America for perfecting in the swinging 60s - but they remain very highly sought after, as evidenced by the price tag of this week's Showpiece. The car in question is one of the 50 cars built by Shelby to commemorate the 427's half century in 2015. Each was sold as a rolling chassis, and could be had either in fibreglass or aluminium - the latter costing $180,000 before you went to the trouble of finding a suitable big-block V8.

"Genuine Shelby Cobras are very rare and desirable," said a spokesman at the time. "We wanted to honour Cobra's unique heritage, while incorporating a few upgrades that Carroll personally approved before his death in 2012. These 50 limited edition cars keep the flame sparked by the race-winning Cobras burning bright. There just isn't anything like a real Shelby Cobra." Of course he was proven immediately correct by the near vertical appreciation the model experienced once clear of the production line. It is on that trajectory that SuperVettura Sunningdale has valued this example, which can be had for £500,000 if you wish to export it or £600,000 if you're paying the VAT.

We rather hope it's the latter because there are few sights and sounds worth savouring quite so much as the raw spectacle of a properly cherished 427 Cobra coming along the high street. With a 7.0-litre V8 motor present and correct on the checklist, and just 200 miles on the clock, our hero certainly qualifies as that - and the claimed 600hp output ought to mean that its performance is as spectacular now as it was in its heyday.

"The big block Shelby Cobra changed the way the world viewed American manufacturers when Carroll Shelby introduced it in January 1965," said Joe Conway, CEO. "Shelby American's goal was to create the world's first hyper car and the Cobra lived up to its potential."