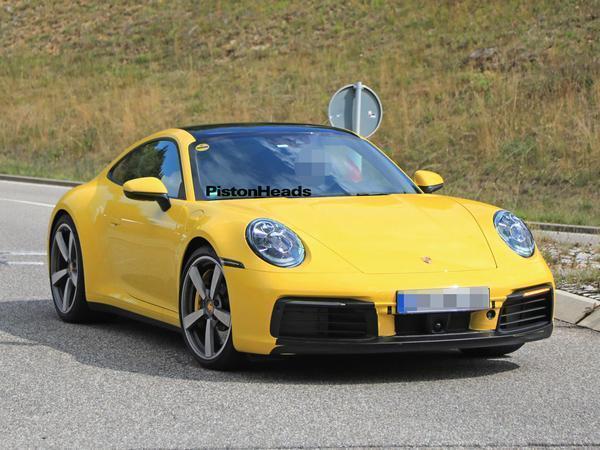 Whether you like it or not, the arrival of a new Porsche 911 registers as a pretty big event on the PH news calendar. Because, while there have been a few blips along the way, the 911 is typically one of the best sports cars money can buy. Indeed even the current turbocharged generation offers an enviable combination of talents, despite a lot of its architecture having first been launched in 2011.

As is often the way with 911 updates - 996s and water cooling, 991s and electric steering - the '992' generation is expected to usher in some pretty significant changes for the model. Expect hybrid options, more driver assists than ever, and an interior heavily influenced by the Panamera and Cayenne.

Confirmation of that is to follow; what we have for now is the best look yet at the production 992's styling. And we all like a nose around something we're not meant to see, don't we? While still easily identifiable as a 911, there's clear influence in this 992 from the Taycan (especially at the rear), and it's clearly wider, too - if the rear track grows, so stability and passenger space should improve with it. Autocar suggests that this 992 will be as long as the current 991, however, despite what these pics might suggest; a construction that's said to make extensive use of aluminium should save a bit of weight, too.

What else can we tell from these pics? Certainly it would appear, unsurprisingly, that the occasionally baffling levels of 911 configurability will survive to the 992. In these three cars there are three wheel designs, two brake options (yellow calipers being for ceramic rotors), two exhaust options and one car - unforgivably, if you ask us - with the rear wiper option. The solitary interior pic reveals more Panamera influence as well - see the large central display and new TFT dial arrangement.

At launch the 992 is likely to use the current range of turbocharged flat sixes, with a mild power boost for both Carrera and Carrera S models. Expect the Turbo models to follow with the hybrid at some point in 2020. As for gearboxes, nobody seems to know just yet; we'd venture that both the seven-speed manual and PDK dual-clutch will be carried over from the current 991.

Further details - and more pics like these, most likely - will continue to emerge as the 992's November launch date approaches. Arguably no sports car ever faces greater scrutiny than the 911, so what do you make of it? Whether you're predicting a successful reincarnation of an iconic sports car, or a further diluting of the 911's classic appeal, all thoughts are welcome. Over to you...

V6 and 2021 confirmed for McLaren hybrid