It's time for a new e-petition on the Directgov website: "This country needs a National Fast Car Day." 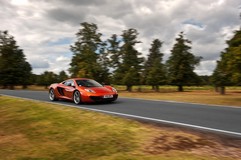 The premise is simple. The population will be induced to stay at home by means of a specially recorded 8hr celebrity edition of the Jeremy Kyle show, while individuals with access to a bone-fide fast car (there'll be a debate, but let's say 280+bhp/tonne for now) get to play unimpeded on their favourite roads. Citizens who sign an alternative petition ("Keep cretinous garbage off the TV") will be allowed to watch the action from specified viewing areas such as overpasses, embankments, etc. Speed restrictions will be lifted, and traffic police will be temporarily re-assigned to marshalling duties, plus offering soothing cups of tea and/or commiserations after any unfortunate incidents.

We've needed a day like this for years but, having just spent the best part of a weekend with the McLaren MP4-12C, the situation has clearly escalated. The only alternative is for car makers to start engineering compromise back into their vehicles, so we can start to enjoy (and/or be afraid of...) 'the edge' of a car's performance envelope again - at speeds that traffic on our roads, or sanity, will allow. 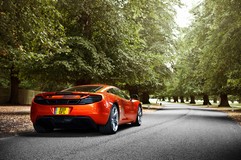 Seriously, thanks to a combination of dawdlers, congestion and the desire to keep some wriggle room on my licence, I couldn't find anywhere to properly unleash the beast that lurks within McLaren's (initially mild-mannered) new supercar.

I know a beast does lurk within, because it showed itself from time to time through little flashes of ferocious brilliance - a deftly gobbled-up trio of B-road bends, mad-cap acceleration past a line of Lincolnshire potato lorries, that 'fastest-ever' motorway slip-road sweeper, etc. But you won't be surprised to hear it's impossible to properly enjoy the 12C's performance on public roads.

Some think the law may even be interpreted to preclude it, which I guess is why buyers (and reviewers) consider 'emotion' to be such an important part of the supercar experience. If all that latent potential can't be expressed in other ways, why bother with it at all? 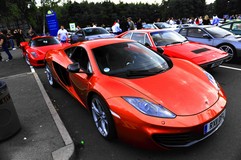 Well, perhaps being on the 'under-stated' side of emotional myself, the McLaren delivers that subjective quality in exactly the right amount. For starters it looks gorgeous. Not in a flashy fashion, but then if you need bling or silicon tits to look a million dollars you've got an underlying problem to start with. 'Our' 12C, finished in ravishing Volcano Orange, looked as though it had been drip-formed from molten metal when the sun shone. The rest of the time it just looked powerful, lithe and sexy. I wasn't the only one to think so - at every stop the car attracted admirers like the Emperor Calippo drew the vespula vulgaris.

To get inside, you have to slide your fingers under the upper portion of the door panel in the manner of a poacher tickling a trout. I'd prefer a button. The doors 'scissor' upwards, but unfortunately also swing outwards to a degree that can make public parking a challenge. With traditional doors you can usually open them a little and squeeze in or out even if somebody else parks too close. With this set-up you've either got sufficient room - or you're trapped in or out of your car. Fortunately the solution is obvious. Don't park, just drive... 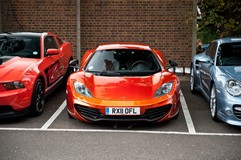 Have a look around the cockpit first though, because it's beautifully set-out and crisply finished. Our car had the benefit of a lavish spec that included leather sport interior, carbon fibre trim and contrast orange stitching on the dashboard.

The electric memory seats and steering wheel adjust to give even tall and fat blokes like me a comfortable set-up - with head- and elbow-room to spare - yet the car still feels beautifully compact around the driver. That's one trade-off from McLaren's novel 'space-saver' centre console, the other being a 90-degree rotated nav/infotainment centre that still hasn't been finished leaving early cars to be delivered without full functionality. (They'll be upgraded later - blame the Japanese tsunami, etc.) The sense of compactness extends to the view through the windscreen, with wheel arches framing the view either side of an elegantly dipping bonnet. It's workmanlike, unflashy, yet totally 'pukka'. And you could sit comfortably for hours.

The instrument layout is clear and elegant in its simple binnacle, and there's nothing to distract on the grippy steering wheel apart from that red 'extra' bit from the end of the McLaren logo which sits in the middle of the boss. Apparently it's a graphic that's evolved from Bruce McLaren's original Kiwi logo, but on its own it looks like something you'd peel off the side of a trainer in J. D. Sports.

(Careful - you can get four years for that. Ed.)

I'd replace it with a PH Smiley sticker, pronto.

Beneath the nav-station in the centre console sit two rotary switches for Normal, Sport and Track configurations - the one on the left adjusts the chassis settings, the one on the right is for the powertrain. The switches only come into play when you push the 'Active' button beneath them, so you can leave them set to Sport/Sport and still loaf around in the default comfort setting until there's a gap in the traffic. 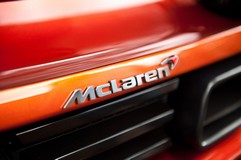 So let's hit the starter, and loaf... which surprisingly is something the McLaren does effortlessly well. The engine, in spite of the newly modded induction system, barely intrudes at all below 2500-3000rpm so in 'general usage' progress is peaceful and refined. Which means you can chat easily to your passenger at 100mph all the way to Le Mans or Monaco, and you won't get out with a headache. The suspension is terrific too - in both comfort and sport modes the unique McLaren set-up soaks up potholes and even those evil kerbside drain covers with unerring aplomb. The sort of stuff that would send shuddering crashes through the structure of many exotics.

Put your foot down and start using some revs, and the noise gets louder - moving from a gruff throaty roar to a definitely pleasing howl in the top half of the rev-range, but even at the 8500rpm redline it's never overly intrusive. It's not one of those highly-pitched shrieks the Italians favour, designed to make your engine sound as though it's been tuned to within an inch of its life, but it's a lot more mellifluous than a 911 turbo, for instance. Again, it works for me, but others may find it underwhelming - particularly as a couple of motorway 'fly-bys' had fellow PHers reporting the sound as being relatively muted from the external third party perspective. 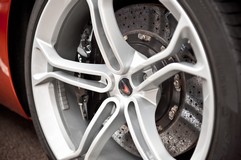 Anyway, you'll be forgiven for not caring too much about the sound as the performance kicks in. McLaren quotes 0-Vmax in fewer than 1000 metres, but we didn't attain anything like 205mph even with the empty M1 stretched out before us at 3am on a Sunday morning. Sometimes it's hard living up to 'older and wiser'...

Naturally we tried the acceleration 'a bit', and the car really does feel mind-blowingly quick. There's a sort of exponential/time-warp factor as the turbos gather themselves up, but my over-riding sense was that going this fast has no right to be this easy. Other cars I've driven with anything approaching similar performance have delivered it with more dramatic side-effects, be it noise, ride or a sense of barely concealed rising panic that the McLaren just doesn't prescribe to. It's as easy as 1-2-3, roughly translated as Pedal, Turbos, F***ing Hell That's Fast, or more scientifically as 0-100mph in 6.1secs... 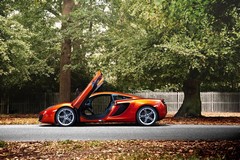 Fortunately the brakes are mighty too, especially as we had the carbon jobs fitted, and although McLaren recommends iron discs for road use we didn't mind the sporty option at all. (Apart from a tendency to creep when holding the car on the footbrake at traffic lights, etc, if we weren't paying attention.) They dragged the car back to sane speeds smoothly and efficiently, with a decently firm pedal pressure required.

Off the motorway, light and direct steering combined with the car's compact feel make it easy to place accurately around corners, and only the manual gearchange disappointed slightly. Not for speed or smoothness, but it would be nice if the race-style column yoke gave the paddles a bit more of a crisp, mechanical action. Grip, agility and body composure through corners at speed is pretty much peerless, and the roll-free Sport setting retains amazing comfort too thanks to the 'active' nature of the hydraulics. 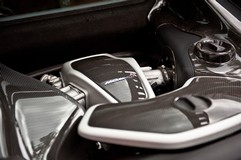 When you factor in the useful luggage capacity - there's a decent 'boot' at the front, and a big shelf behind the seats - and the 12C's everyday comfort and 'driveability', it's hard to see what stands between it and the epithet of 'perfect every day supercar'. (Apart from possible problems parking at the supermarket.)

But that would be a lousy sign-off for a piece about such an epic machine. If McLaren will let us have it back for National Fast Car Day, we'll gladly correct the oversight!