A no-brainer for any NC owner? Absolutely... 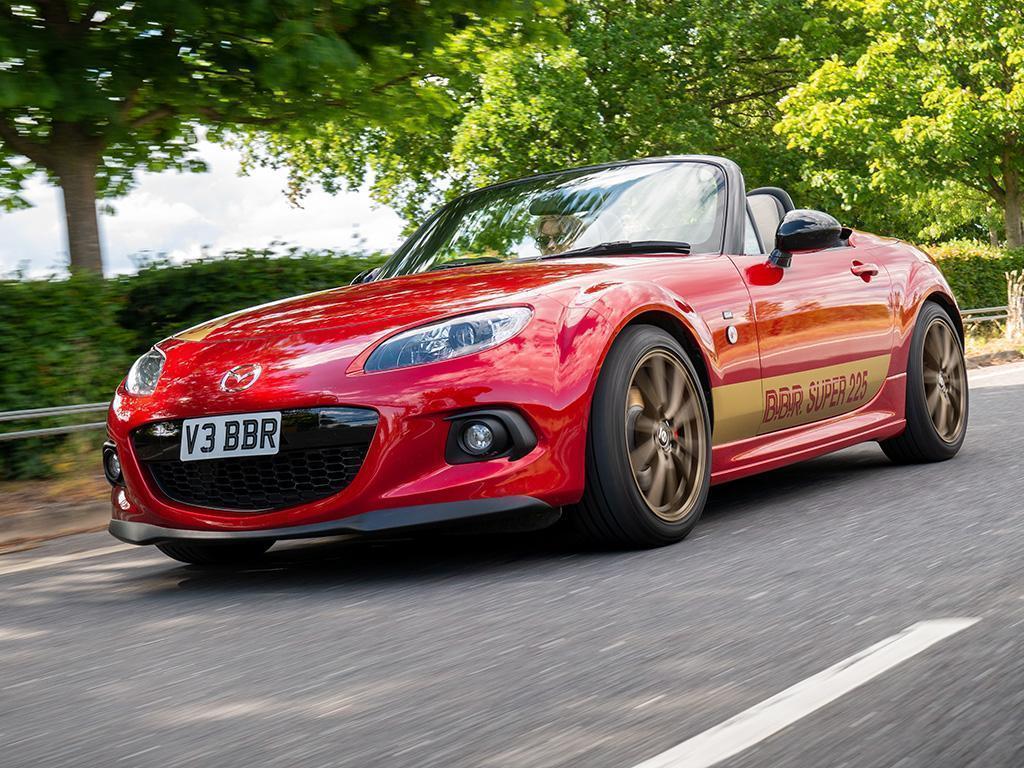 Mazda’s NC MX-5 is the podgiest of the model's four generations, and arguably the one most ripe for tuning. Bigger and more solid than the first two MX-5s, and considerably more attainable than the latest version for obvious reasons (healthy 2.0-litre examples can be had for less than £4k) it’s an increasingly popular MX-5 for those after either a bargain or a track day hack. That's exactly the clientele BBR GTi is trying to appeal to with its latest creation, the Super 225.

As the tuner's highest ranking NC kit that doesn’t resort to turbocharging, the 225 builds on the established Super 220 conversion, which adds a four-to-one manifold, camshafts and exhaust system to the MZR LF-VE 2.0-litre unit. The 225hp output is ultimately achieved with independent throttle bodies. It’s all been developed to work with the standard ECU and requires no modifications to the engine bay or chassis, so it’s fully reversible. BBR can have an NC turned from standard to Super 225 in a day for £4,295 – or a handy buyer can do it themselves for £3,495.

BBR’s development car, a 2014 25th Anniversary model with almost 60,000 miles on the clock, is also equipped with the firm’s in-house developed springs, Koni dampers and gold 17-inch Sparco alloys, accented by BBR decals. The changes add styling heft to the cuddly NC profile, and given that many buyers are expected to take their cars on track, it seems likely that plenty of Super 225s will leave the workshop with at least a few of those extras. But they needn’t, and BBR’s demo has a completely standard interior and retains its factory-fit folding hard top.

Much of the 225's appeal over turbocharged alternatives – aside from the price – is the way the NC’s low speed character remains mostly as standard. Mazda’s four-pot is docile and hushed at low revs, with only the bass of BBR’s exhaust signaling that anything has changed. Even the tweaked chassis, which is progressively sprung and starts at 15 per cent stiffer than standard, rides remarkably well over bumps and ridges. In normal operation, BBR’s 225 will feel wholly familiar to any NC owner. And that’s not by accident – BBR said it’s run the ITBs with longer intake lengths to give a broader spread of performance.

Of course, those familiar with ITBs will know that you’re only four open butterfly valves away from a completely different personality and a whole lot of noise, and the 225 duly delivers on that front. Pin the accelerator and the tone builds from a deep gargle to an intake roar that only tails off at a BBR-set 8,000rpm limiter. It sounds mega, and is backed by the raspy note of new stainless steel pipework. The motor’s not become explosive or peaky in the transition, though - it pulls strongly from 4,000rpm, with 170lb ft available through to 6,000rpm. Driveability is really very good.

That said, thanks to the NC’s fairly leggy standard ratios, you are rewarded if you work Mazda’s short-throw six-speed gearbox and keep that engine toward its top-end. The responsiveness of the motor, which retains Mazda’s fly-by-wire throttle in the 225, makes heel-and-toeing easy, with the heaviest inputs encouraging a few pops and crackles from the exhaust. These are of the genuine sort; less heavy-footed enthusiasm results in a much more sedate soundtrack. Against a backdrop of supremely punchy turbocharged engines, progress is more quick than rapid, but the motor’s enhanced enthusiasm for revs makes its all seem tremendously rewarding.

That's as it should be. BBR can tune the NC to 300hp if you wish - the 225 is all about usability and simplicity, not to mention the kind of toughness that endears it to regular track use. If that's your jam, swapping out Mazda’s somewhat roly poly chassis setup also makes sense. The improvement in handling unlocked by BBR’s suspension changes dovetail nicely with the improved delivery. Roll is significantly reduced, sharpening the NC’s already responsive front end and making it even easier to exploit its inherent balance. Factor in the ITB’d motor, and you’re handed a newfound ability to manipulate its line with the throttle. We’d back BBR’s recommendation of EBC Yellow stuff brake pads, as they beef up stopping power to match.

BBR’s actually not totally finished the development work on its Super 225 kit, with some additional ECU fine-tuning required to iron out a very slight and barely noticeable hesitation just above tickover. Once that’s done, the tuner says the car will have been subjected to around 100 hours of testing, providing a base setting that can then be copied and pasted into customer NCs, before any bespoke fettling occurs. BBR can supply just the ITBs (for £1,795) for those wanting to create their own setup, but as this demonstrator amply proves, the complete BBR package is as rounded and refined as it is exciting. A no-brainer? We think so.