Group B heroes don't come cheap, and this Manta is no exception. Still, with right-hand drive, you won't find another like it. 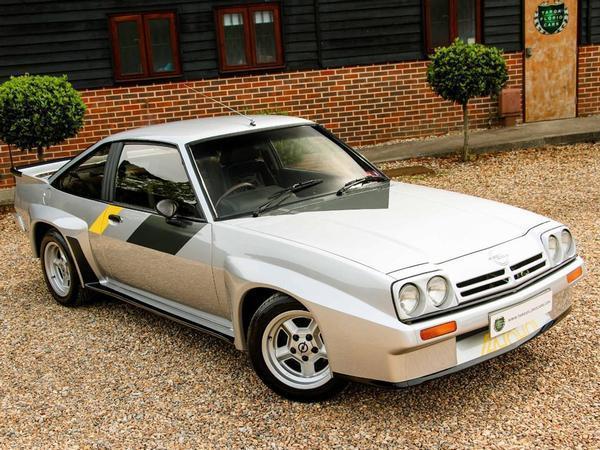 Hands up if you know where the front indicators in the Opel Manta 400 come from. Go on, have a guess. That's right, you spotted it: they're actually the bumper-mounted units from the Mk3 Ford Capri - ironically, the Manta's chief rival in period.

This little nugget of trivia might just be the least interesting thing about the Manta 400. So much for the classic journalistic methodology of starting with the most important points, eh? Still, we're off and running, however shakily, so without further ado let's get to the more salient point about this rather terrific car, which is that there's one for sale in the classifieds - and it's right-hand drive.

As you'll probably be aware, all 245 Manta 400s were originally left-hookers. They were built in order to homologate the Group B rally version of the 400, which took part in the World Rally Championship from 1983 to 1986. Both cars featured a 2.4-litre 16v four pot, turbocharged of course; in competition form, this was ostensibly rated at 275hp, though road-going cars like this one were pegged back to a less ballistic - for the time, anyway - 144hp.

0-62mph came up in just shy of seven seconds - the sort of figure, in other words, that sounds like it was pitted directly against the Ford Capri 2.8 Injection. But the Manta 400 was a rather different animal, closer in spirit to the Sierra RS Cosworth which came along a couple of years later. It was stiffly sprung, with Bilstein dampers, giving it a far racier feel than its grand-touring rival, and that meant you could push on harder and monster cross-country blats, easily leaving the boy racer in his Capri behind.

Inside, though, the Manta was no out-and-out racer. Oh, sure, you got Recaro seats, but they were trimmed in plush velour - with, it shouldn't be forgotten, a truly fantastic repeating Opel logo pattern the like of which you simply don't get these days. You also get a handsome leather-rimmed wheel and a stereo radio cassette - more than enough to make driving the 400 a comfortable affair.

This example, however, is a little different to the rest on account of the location of its steering wheel. According to the advert, it was originally owned by Tony Fall, then the director of the Opel Motorsport Team, who imported it to the UK and had it converted to right-hand drive, which explains it. Of course, that does beg the question of which bits were used for the conversion and whether it'll still drive as Opel intended, but as the conversion was supposedly carried out by a Vauxhall dealership, rather than being a hack-job done in someone's garage, and commissioned by the then-boss of the company's world rally team, you'd hope it's about as good as it's likely to get. But there's a bigger issue at hand - and that's the price.

£84,995 is a frankly terrifying amount of money for this Manta. Is it worth it? Well, on the one hand, as we all know, RS500 Cosworths - similar in nature and rarity - are now commanding sums that aren't too dissimilar, and on some occasions higher. After all, this car hasn't even ticked over to 30,000 miles yet - and with its provenance, it's no exaggeration to say it's unique. On the other hand, the RS500 was quite a bit more powerful, achieved quite a bit more in competition, and is much more of a hallowed icon, in the UK at least. Throw in the fact that this very car sold at auction for £50,600 in December last year, and it starts to feel very pricey indeed.

Still, if you fancy a 1980s homologation hero that isn't one of the usual suspects, it's up there. And even if you aren't willing to part with the sort of money being asked, take a moment to ogle that fantastic bodykit, those terrific seats and those glorious decals. Oh, and those front indicators, of course. At least you know where they come from now.