PH bids farewell to the Megane by recalling some of our favourite drives (updated with another entry!)

You may just have picked up that the Renaultsport Megane III is something of an office favourite here at PH. We knew the end was coming and yesterday we had the official press release saying the

off the production line is now on sale. A sad day indeed but there are

currently in the classifieds ranging from less than £10K for early 250s to three times that for run-out 275s, including what looks like a very good value

Suffice it to say, you can still have one if you want one. Below are some reasons why you might as members of the PH team recall their favourite drives in Renault's defining hot hatch...

I once owned an example of the excellent, if ludicrously named, Renault Megane Renaultsport 230 F1 Team R26. I sold it for reasons I can't remember and regretted it instantly. After daydreaming about buying another my attention turned to the Megane III. I didn't think it looked as good but the seed was planted. Clearly, I needed to drive one.

I managed to secure the use of a 265 Cup for a long weekend, planned a route through Wales and set off with high expectations. The car more than lived up to them. I vividly remember driving the Black Mountain pass in the Brecon Beacons and being blown away by how composed and agile the car felt. The combination of straight line pace, precise steering and a chassis that is both a faithful companion and also playful when you wanted it to be was incredible. It was just so much fun. So much in fact that even with quite a long way to go until my overnight stop I turned around and drove the road all over again. On that day, on that road, I'm not sure there was anything I'd have swapped it for. What an amazing car... but I never did buy one, and I'm not sure why. If anyone needs me I'll be in the classifieds.
(James Drake)

Megane 275 Cup-S on road and track

If I were in the market for a hot hatch two months ago, I would have said I'd driven all the notable contenders. All but the Renaultsport Megane 275 Cup-S. As an existing Renaultsport owner in a Clio 182 Trophy, I had extremely high expectations for the Megane ahead of a shoot-out at

against the Civic Type R.

Over breakfast Dan suggested we could work over coffee for a bit or go for a drive across Saddleworth Moor. Obviously we did the latter. Starting in the Civic, I knew the Megane had a lot to live up to after it beat the Focus RS in Wales. It matched the Megane for pace on the road, the Civic reminding me of its brilliance thanks to that incredible gearshift and sharp, responsive brakes. Jumping into the Megane my mind was made up before we even got to Blyton though.

Feeling like a grown-up version of the Clio, the playfulness and rear end adjustability really does make you laugh out loud. For me this differentiates the Megane from any other hot hatch on the market. The Civic pulled harder and the brakes didn't fade, whereas the Megane was struggling towards the end of the session. But the pops and bangs from the Akrapovic exhaust and that sensational feel and adjustability from the Ohlins-damped chassis made it an easy call. You can keep your Golf Rs, M135is and A45 AMGs - the Megane in some form or another is 100 per cent the car I'll be buying.
(Ben Lowden)

It was December 2014, the period just before Christmas - and just after my birthday in fact - where the automotive world is quiet and there's not great deal going on. That must have been how we got hold of the

. Because who wants a car on Michelin Pilot Sport Cup 2s in December?

The tyres didn't matter. The fact it was nearly £40K didn't matter. That I didn't drive it on the Goodwood track day didn't matter. Alright, that last bit did matter a bit. But on one dank and dark December night, the Trophy-R was magnificent. I only took it on the roads out near the office (and regret not staying out longer), but it was just sublime. It took everything that's so great about fast Meganes - the involvement, the precision, the entertainment - onto another, even more exciting plane. The body control was extraordinary, the noise from the Akrapovic exhaust addictive and the sense of occasion from being harnessed in completely fantastic. The R26.R is the original. But I love the Trophy-R even more.

Over Christmas that year friends and family were asking about the best car I'd driven in 2014 and I could say, without hesitation, that it was the stickered up, £38,000 Renault Megane. They didn't get it. Their loss...
(Matt Bird)

Megane 275 Trophy at the 'ring

I remember the launch for the 250 at a rain-soaked and very slithery Ascari where Renaultsport's tame rally driver willingly demonstrated how tail happy the new car's chassis set-up was with artful trail-braked slides into every corner. Then there was the unexpected reunion with

, the PH long-termer I specced but never got to drive. Capsicum Red, Cup chassis, 18-inch wheels, Recaros ... yes, I got that one right! But the best has to be driving the

around the 'ring, a combination of two of my favourite things in one hit. 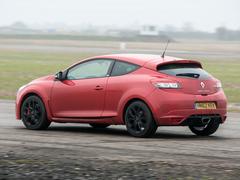 This to me demonstrated exactly what the Megane III is all about. To make it go faster around the Nordschleife Renaultsport didn't bump up the power, there being just a slight tweak to the curves and a modest 10hp gain as a by-product. No, the extra speed came from the chassis. And the combination of the Ohlins dampers and the Michelin Cup 2 tyres just made the car even more precise, sharper still and almost delicate in its balance, as demonstrated when I got a lap beside

in the R. His neat, elegant driving style was a perfect match for the Megane, which for all its speed remains a 'fingertips' kind of car and all about the feedback. The 275's lap time came from its ability to flow round the Nordschleife, not take it on in bare knuckle combat. For a sense of that my (rather slower) laps in the 'regular' 275 Trophy remain a stand-out memory.

Not counting having to hand back the keys to the collection driver, I don't think I've ever had a bad experience in a Megane Renaultsport. But the one drive that stands out in my mind was the

in the brand new Megane 265. It was the first car in the country, briefly, because within a few hours I had thrashed it across rural Kent, boarded the Eurotunnel and repatriated it in Northern France, destination Ardennes.

My one and only drive in the previous generation 250 had not really done it for me - it seemed a bit blunt and cumbersome - but just a few laps of the magical Spa in the 265 had shattered that opinion. Scalpel sharp, obediently adjustable and with just enough extra in the legs and lungs to keep me from rocking back and forth behind the wheel down Kemmel. The Megane was back on form.

Renaultsport always needs a bit of time to warm up and get into its stride with a new model, and the Megane III was no different in this respect. The 265 Trophy marked the turning point, the 265 brought that to a wider audience, and then the momentum kept on gathering until culminating in that spectacular Trophy-R. On second thoughts, getting to hammer that around Goodwood on a cold December day has to be my definitive Megane moment. Sorry Matt.
(Danny Milner)