Back in the 'ring: PH Blog

VW lops a couple of seconds off its own GTI Clubsport lap record; novelty still hasn't worn off for Dan

Plenty of people have long since given up on the whole Nurburgring sausage waggling lap record thing. If that's you then please accept my apologies. Because I haven't at all.

Not sure how I missed the fact VW's tame racing loon Benny Leuchter went out in October and, seemingly for no good reason other than he could, lopped a full two seconds off his 7min 49.21sec to record a 7min 47.19sec. Mainly by taking the rallycross line through some of the corners and going for a maximum attack, minimum mechanical sympathy approach. Still, whatever it takes!

I should be so over all this by now. But for a good few years regular trips out to the 'ring with a bunch of mates were a major fixture of my life. And though my visits there are now far less frequent the spell the place cast over me remains in place. I invested so much - emotionally, time-wise and financially - I just can't shake it.

I guess it's a car nut's equivalent of a soap opera. I have no idea what makes people tune in to - seemingly - slightly different versions of the same old storylines every night like clockwork. Much as they probably wouldn't understand while I'll stop everything for the seven minutes and whatever seconds it takes for the latest benchmark lap time round the Nordschleife. And the ensuing discussion that follows. 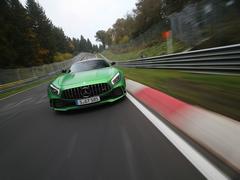 by Sport Auto's Christian Gebhardt in the AMG GT R. The response to the story we posted on it followed a familiar pattern; initial 'woah, geezer, he's got brass ones' and all that before the usual 'yeah, but bet he was on trick tyres and/or had the boost turned up' conspiracy theories. This even extended to Dale

of what looked like a stack of slicks in the pits, later corrected when Gebhardt himself emailed a close-up of them to reveal they were in fact the correct Cup 2s. Just ones he'd, cough, scrubbed in on a previous session. Hero points not only restored but bolstered!

The 'because it's there' factor has inspired many admirable human achievements, not to mention a few pointless ones too. There may be some sort of internal politics behind sending Leuchter out for another lap time but, whatever the motivations, the combination of unseasonably dry track conditions and cool autumnal air has made for rich pickings if you've got a turbocharged car and a point to prove at the Nordschleife. There's some personal interest too because I met Leuchter at the launch for the non-S GTI Clubsport at Portimao and enjoyed some slightly daft laps chasing his Golf R. It was meant to be ducks and drakes instruction but when he started taking big bites of kerb I realised things were escalating somewhat and the high fives and giggling when we got back in demonstrated an appealing combination of competitive spirit and appetite for mischief. A jockey-like build probably doesn't do any harm when hunting for tenths either.

So, yes, 'ring laps remain my Eastenders or Corrie. And just as inexplicably addictive to me as watching sulky people scowl and screech at each other are to soap addicts. Each to their own.