So what's it like to drive one of the fastest FWD cars at the 'ring? Road trip time!

While its glory as front-wheel drive

(and there remains some debate about its validity in the first instance), the prospect of driving a

around the Nurburgring remained very exciting. That it was part of a birthday celebration weekend for a friend made it all the more so. 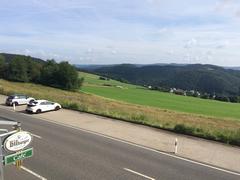 Don't forget the local roads are ace too!

See, despite the ongoing discussion about how the Civic looks and how its four-wheel drive rivals are more relevant, it is a fantastic car on a circuit. I really like it. So what better track to further prove the point?

Hands up, my laps over the weekend (including the one on video) were nowhere close to 7:50. Or 9:50 probably, given the traffic. But, frankly, the place still scares me a fair bit and it was so busy in places that you wouldn't have been able to push anything too hard. And I had to drive the car home too.

But it remains such a privilege to drive the Nordschleife: snaking through the Hatzenbach section, charging down the Foxhole and dropping into the Karussell are just so much fun. Moreover, there was sufficient opportunity - despite the traffic - to explore what I like so much about the car a bit further.

Even on such a big circuit, the Civic still feel really quick. It never feels overawed, pulling hard even at challenging sections like the run out of Bergwerk. The brakes are super strong and very confidence inspiring, feeling fantastic on the big stop into Aremberg. And the gearbox. Well, enough has been said about that already, but having such a precise and satisfying action is a real pleasure on track. 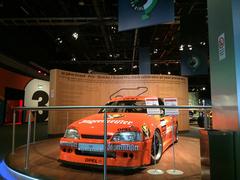 Worth the museum entry fee on its own

I tried a couple of laps in +R mode too; how could I not after Honda made such a fuss about the Nurburgring developed setting? The suspension does initially feel too stiff but, against expectations, it doesn't deflect or unsettle the car at all. Instead you get greater control, which isn't what I first thought would happen. Having selected it I never thought to turn it off again. Until the drive home.

So while I may not have set any lap records (or indeed used all the laps I paid for), it was another handy experience where I learnt more about the car and the track. It seems the Civic is popular with 'ring goers as well. Essentially, you need to get to the Nurburgring if you haven't been. Yes, tourist days can be pretty chaotic (the Saturday evening session was cancelled entirely, and the Sunday started late), but the atmosphere can not be matched. It's a heartening place to visit as well, the car park featuring some glorious stuff that you may have assumed was holed up in a collection. If you're worried that car enthusiasts are a dying breed, the queue to get onto the Nordschleife will put you right!

It's less than five hours from Calais, accommodation is reasonable (try the Berghotel Hohe Acht) and steak on a stone at the Pistenklause is delicious. There's even a museum with more cars in. Get yourself there, get a couple of laps in (carefully) and learn about why the Nurburgring is such a fabulous place. I can't wait to get back.