Nice man lends the keys to his GTO to Dan, four days later he's still not shut up about it

I'd tempered my expectations. Sure, it was going to be fast. It was going to look lovely. But 70s/80s supercars are meant to be as disappointing in reality as they are iconic in reputation. Right? 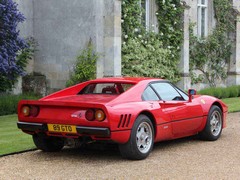 Most will think it's a 308; those that know will know

doesn't disappoint. Not even slightly. A hero car before I saw it in the metal it's now utterly cemented in my personal number one spot. How much they going for now? Oh...No matter, I need to commit some words to the page before the comedown kicks in and the realisation I don't have the keys in my hand any more dawns.

What makes the GTO so special? Well, sure, it's worth a million. They only made 272 of them. It's easily the best looking mid-engined Ferrari ever built, elegantly treading the line between beauty and aggression with perfect proportions and exquisite detailing. It's got Ferrari's most celebrated and exclusive model suffix and bona fide 'omologato' provenance, even if the category it was built for moved in a different direction. It stands as the intersection between the way Ferrari used to do things - tubular frames, handbuilt craftsmanship, zero driver aids - and the modern age of turbos, composite materials and lunatic performance. Do the maths on all that and you'll realise why most probably don't get used as intended. Which is a tragedy, because, more than anything else, as a driving machine it's even more exceptional than you'd dare hope. 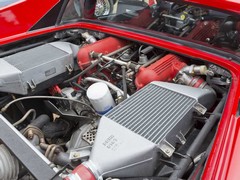 Here's where it all gets a bit different though

I expected it to be truculent. I expected it to be scary. That it's neither of these things as you pull away is a bit of a surprise. It feels small and wieldy, the visibility is great. The low-geared and unassisted steering is weighty at low speeds but soon lightens up and, with the fluids warm, the long, ball-topped gearshifter clicks and clacks around the evocative open gate smoothly and positively. The pedals are off-set into the centre of the car but the brake pedal and throttle - latter with exposed linkage visible disappearing into the centre tunnel - are perfectly placed for heel'n'toe and instinctively fast and positive in response for doing so. The inertia-free response of the engine and the sharp clutch would seem ready to catch you out but are actually pretty friendly and the 16-inch magnesium OZs leave plenty of sidewall to soak up the bumps. Only the occasional shudder through the steering column and stubborn refusal to go into reverse lives up to those eccentricities you read about as a kid in those magazine roadtests.

The front end wanders a little but the controls are all pin-sharp and beautifully weighted and the consistent, harmonious feel to them immediately soothes your racing pulse. There's nothing especially exotic about the flat-cranked blare of the 2.8-litre V8 but the whooshing of boost adds some theatre and once those turbos spool up you've got other things on your mind. Below about 4,000rpm the GTO feels really fast. Above it feels absolutely ballistic but the transition is progressive rather than binary and the power band feels vast and exploitable. As it should given a specific output of 140hp per litre.

I've no doubt it becomes properly scary as you get nearer the limit. But at a considered pace the GTO is utterly absorbing, astonishingly accommodating, readily exploitable and - most of all - fun. Yes, fun! 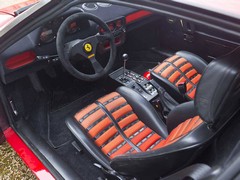 Back to basics but how it should be

Here's the major revelation. It's a brilliant road car. Somehow the performance is both completely relevant to street use and yet at the same time so utterly inappropriate as to be almost comedic. 400hp in this day and age isn't quite as mental as it was back in the day but the GTO is properly, thrillingly fast and the sensory overload as it spools up and things go all a bit blurry is exactly the kind of turbocharged rush we want. And that modern turbo engines seem so keen to mask. Boo!

Give us our boost back

It'll be interesting to see how Ferrari handles this with the 488 GTB we'll be driving next week. Like many manufacturers they'll likely be wanting to keep it feeling linear and normally aspirated, so as not to spook those who've grown up with howling normally aspirated 360s, 430s and 458s. But at the same time with legacy like this why not make it feel overboosted and a bit unhinged? We'll see which way they have chosen to go very soon. What's astonishing in this modern context of downsized, turbocharged V8 supercars is how far ahead of its time the GTO was.

You know the modern car it most reminds me of? The Alfa 4C. Or, at least, the car the 4C could be if someone from Alfa Romeo took a GTO out for a day, came back used it as inspiration for a proper set-up and controls calibration. Sure, it's not got the relative performance advantage the GTO had over its contemporary rivals. Or the manual gearbox. But at a basic sensory level the Alfa has a lot of the same DNA, from the size and seating position to the view out, power delivery and even the noise. 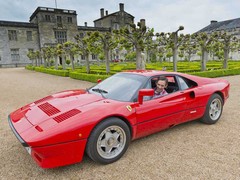 Stop grinning, you've got to give it back now

But, of course, even properly set up it could never match the real thing's iconic status, its finely balanced combination of beauty and aggression, its surprising combination of delicacy and brute force. I love everything about this car. Even the way you can see the gearbox jutting out from under its truncated rear valance, reminding you this is something over and above the 308 family it superficially resembles.

I'd have been blown away just seeing a GTO. Having driven it I can't think of a single machine that encapsulates all I love about fast cars more. Damn. With that I've probably just put it another couple of hundred grand out of reach.

Never meet your heroes? Rubbish. Drive them if you can. And relish every second.

A little taste of GTO...

Thanks to Wilton House's Lord Pembroke for letting us drive his GTO! To see this car and many more like it come to the Wilton Classic & Supercar with Castrol Edge on June 6-7, including the exclusive PistonHeads Wilton House Sunday Service.