Shed of the Week: Fiat Coupe

Don't let the idea of wayward front springs put you off Fiat's dainty Coupe. We've even forgiven the absence of a turbo... 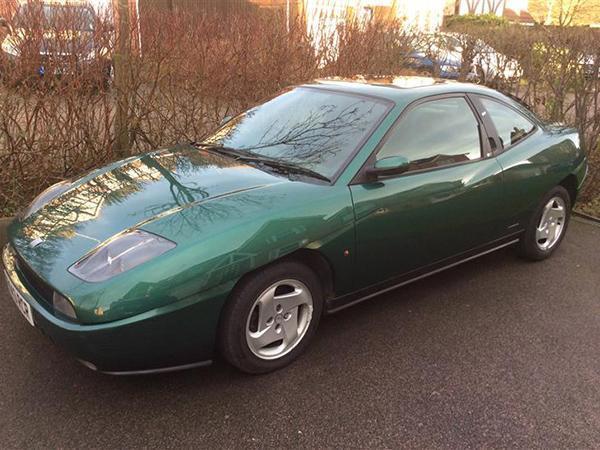 Going to the cinema is a far more sanitary pursuit now than it was in Shed's long-lost courting days. The sort of strokes young men used to pull back then, up to and including the notorious 'holed popcorn box on the lap' routine, wouldn't be tolerated these days. To be honest, they weren't really tolerated in those days either, but that didn't stop folk trying.

What did generally quench the flames of ardour in the pictures was the sight of what appeared to be giant pubic hairs twitching on the screen whenever the ad for the local kebab shop came on before the main feature. You don't get them on today's digital presentations of course, which Shed thinks is a missed trick when it comes to the warmth, humour and overall richness of the external media experience.

This only comes up as a topic of conversation because our Shed, a remarkably solid-looking low-miles Fiat Coupé, might need new front springs. A quick look online reveals that some of the replacements that you can get for this car bear a surprising resemblance to those fondly-remembered faux-pubes. Or, at the very least, to bedsprings from an exploded mattress.

As noted earlier, last October's MOT mentioned corroded front coils on the list of advisories. The MOT fails relating to excessive ball joint play on both sides of the front suspension, dodgy numberplates and a rear exhaust blow were obviously sorted, and you'd like to think that the other advisories - a nail in one of the rear tyres and an engine oil leak - have also been fettled. A new tyre won't break the bank if it hasn't. If the oil leak is from the rocker cover, as it usually is on these 16V 2.0-litre lumps, the solution could be something as simple as replacing the gasket with a newer-type rubber one.

Once you're happy that your Coupé is of sound wind and body, you can get on with enjoying the subtle ownership pleasures of this uniquely-styled Bangle/Pininfarina creation with its headlamp lenses shaped to resemble a woman's posterior region. Eeehh, you Italians!

The appearance on the forum of posts pointing out the superiority of the Turbo five over the n/a four is guaranteed, and there'd certainly be no arguing about that from a performance perspective: the Turbo breezes through the 0-60 sprint in six and a bit seconds and thramps on to 155mph, whereas the 16V takes three seconds longer for the 0-60 and tops out at 129mph.

But that's still decent enough performance for a style-mobile like this, especially when you bear in mind the fact that the non-turbo four motor doesn't have the quite the same reputation for snapping its crankshaft, or its appetite for oil (leaks excluded). If a 16-valver cuts out for no apparent reason, the non-apparent reason could be a faulty crank position sensor, which is another easy fix. It might be even easier than that, and just loose battery leads.

What else can go wrong? Well, cambelt replacement isn't that quick or easy (though it is somewhat harder still on the five-cylinder cars). Coupés can be a tad greedy for tyres, and the old-fashioned pursuit of tyre-swapping is worth reviving to stave off uneven wear.

Bonnet struts break on pre-'98 cars like this one, owing to daft design. The alarm system can give trouble too, and anything electronic needs more than a hard glance. Importantly, there is no mention of rust anywhere, either by the owner or by MOT testers down the years, and the all-important red master key is included in the sale. Try and buy one of these for less than a king's ransom and you'll see why it's all-important.

We like the originality of this car, right down to its cassette player. Whether that works or not is unknown, but if it does you can get out all your Bay City Rollers tapes and remember the good times before, after and indeed during the Bay City Rollers' heyday.

The owner says that the car's 69,506 miles won't increase, but Shed thinks that's quite a pessimistic prediction. He reckons it's good for plenty more miles yet.