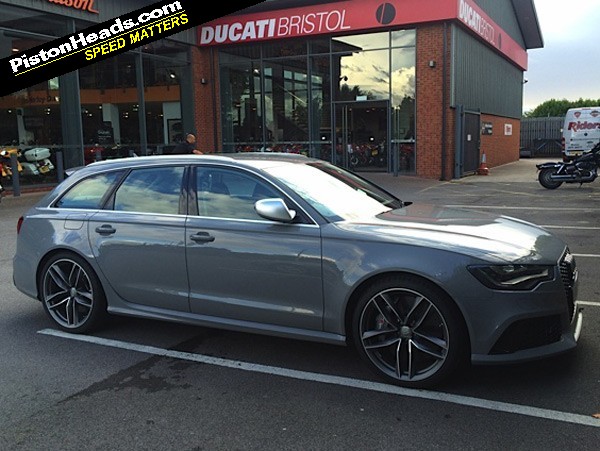 People are not shy around the subject of the RS6's real opposition in the UK. "Wouldn't you rather just have an M5?" is the stock response from pretty much everyone I meet and chat to about the car on the street, in race paddocks, even down the local. For all its mainstream sales success, Audi still has much work to do convincing more knowledgeable types that it can make fast cars which are also enjoyable to drive. 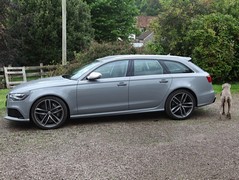 Attracting fans throughout the Harris family

Well the M5 simply isn't a choice for me because I always like my very, very fast everyday car to be an estate. Not everyone is in the same position, but the overlap between practical duties and irritating 911s is too fun to ignore. That's before you've considered mountain bikes, cameramen and all the other things this car handles on a daily basis.

We're now over 3,000 miles into what is already one of the best everyday car experiences I've enjoyed. This is the last time I'll mention the unintelligible differences that exist between this and the smaller RS4, but the more I drive it, the more I hope Audi RS's Franciscus van Meel was part of the team that preferred the extra comfort and usability of the RS6. If so, BMW's gain really is Audi's loss.

I am an unashamed F10 M5 fan, but the RS6 is just more usable and, heading into winter, it will only become more so. It is also damn near as good fun to drive, and in many ways the more complete package.

What is the role of this type of car in one's life? Many people think it's just a complete waste of time - too expensive and barely any real-world faster than the briskest turbodiesel wagons. Wouldn't you just have a 535d? And so on. If you could afford this car, I can't see why you'd want anything else. It is crazy fast, but really does look quite innocuous to the casual bystander. Is it really that much quicker than some torque-monster with 'd' in its badge?

The other accusation is a lack of excitement. Which I find odd. I don't want my everyday car to be some whinnying lunatic, I want it to be relaxing and comfortable and have a killer hi-fi. And then when I want to blitz past something, I want the motive force of Saturn 5 to thwack me into the near future. 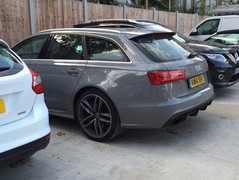 Steering feel? There isn't much. And I know this sounds terrible, but I just couldn't care. The F10 M5 has no steering feel - it's still a great car. Most people that run an RS6 will probably have something else in the lock-up that works on the touchy-feely level. That's not the RS6's role.

This car's perfect role is getting to places fast, with the minimum of fuss, regardless of conditions, and attracting as little attention as possible. You wouldn't ever seek out a wriggly B-road for the sake of it, but when you do find yourself on one the car is just so damn fast and capable. This one runs the sports suspension which isn't the fancy air-supported version and I think it's the best road suspension in the class. For someone like me to say that about an Audi is a bit strange. Even the lovely E63 wagon can't match the Audi's balance of ride comfort and support.

There is a proviso to this and it comes if you try and drive very fast. Then the car does begin to lose some control, but you really shouldn't be driving that fast on the road anyway. And if you buy an RS6 to do track days then you probably have a Morgan 3-wheeler for long journeys.

My brain is just about tuned into the MMI system - but I still don't find it as intuitive as the Merc equivalent. Furthermore, there's no USB socket for charging your phone and the Audi media interface cable supplied with the car is for an iPhone 4. Why is it the motor industry simply refused to acknowledge the new iPhone 5 connector? First world problems and all that. Sometimes the Bluetooth connection goes south, and you can't reconnect in the telephone mode, instead needing to reconnect the device as a telephone, and then switch back to the media function. Are you still awake back there? I'm trying to be objective here!

The front seats are very, very good - and they adjust low enough which isn't always the case. Rear room is generous and despite the rear glass having more of a slope (no complaints to the BBC please) than the E-Class wagon, the boot is still vast. Two mountain bikes fit easily with the seats folded flat. 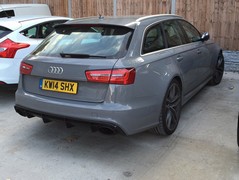 Does start up noise well, other aren't so good

And now some downsides, of which there are very few. Engine noise, or lack thereof. It does the big, boomy start-up, but then it fluctuates between open exhaust valves, a flicker of intake blare and not much else. It's never unpleasant, but it doesn't sound real. Does it worry me? Not one bit, because under full power in second and third you really don't have much spare processing capacity to worry about quantity or quality of noise. You just can't quite believe an estate car should be so brutal.

And there's a slight powertrain coarseness that's crept in over the past few days. It doesn't feel like a wheel inbalance, but I suppose it might be. There's a slight thrum at a fast cruise and under full power you can sense something isn't quite balanced. I shall investigate further.

As for the cries of '£100K for an Audi estate car, you have to be joking!!', well, I've been trying to think of another car that could cover the same roles, and there just isn't one. The fact that most people assume it's just a normal A6 driven by a bloke who was too mean to pay for metallic paint adds to its appeal. Easily the best Audi I've driven, and the best car in its class.