So the gearbox was getting worse. I'd found that manually shifting from second to first before coming to a halt smoothed things out considerably, but even that strategy was beginning to fail and it seemed I needed to make a choice, flog the car as an unwell S4, or sort the 'box. 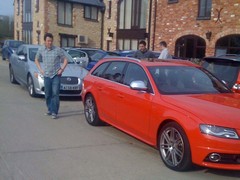 Kept clean in its days as a press car!

Given the overall condition (marginally better than a banger racer), and to avoid being the first man to sell a B8 S4 for £3,500 I chose the latter.

First, but actually for the umpteenth time I tried to locate a specialist who could work on the gearbox, and found no one. VW has done a fine job of restricting extra-dealership meddling with this DSG/S Tronic component. The parts costs a mint and the most common solution appears to either be a new control unit or a replacement 'box. Given the number of VW products using these 'boxes, it's remarkable someone isn't trying to work on them, especially so given specialists like Litchfield are now masters in repairing Nissan GT-R DCT transmissions.

So I hunted and failed and then thought I might just try another oil change, but it had only covered 8,000 miles since the last one, so that seemed pointless. Equally, the level of technical knowledge beyond 'just fit a new gearbox' at dealer level was as you'd expect - zero. So in the full knowledge that I'd modified the car, I phoned Audi UK and asked it their technical bods could look at it and tell me what the best course of action was. They said they would. 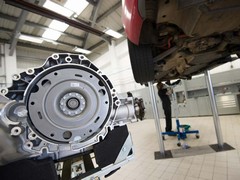 At this point I need to remind you of the mechanical condition of the car, and remind myself of the massive boo-boo I made a year ago. I bought the car from a family member, knowing it needed work and, crucially, knowing that the transmission was pretty lumpy for its 58,000 miles. Where I made a VERY expensive mistake was that I underestimated the good will Audi is willing to offer on these cases where the vehicle is out of warranty. I thought I was on my own, but I've heard from several non-warranted DSG cases that have been 'assisted' by Audi. Not paid for in full, but certainly ameliorated. I thought I'd be wasting my breath, so just went on and remapped the engine and went fast and enjoyed the car.

The technician's report read as follows:

"I confirmed the customer's complaint of clunking gear shift when coming to a stop. This is more apparent when the engine and transmission have reached full operating temperature. I carried out a clutch adaption reset on the transmission and retested for around 30 miles. The clunking reoccurred. I then checked transmission oil level and quality which was OK. I attempted to recalibrate the clutch bite point parameters, however the transmission would not allow this due to a fault with the input shaft. In cases like this, we usually recommend replacement of the dual clutch pack and mechatronics unit (valve body and electronic control unit ) together, however, in this instance I would advise a replacement complete transmission unit to be fitted to avoid the possibility of any further problems arising from this issue." 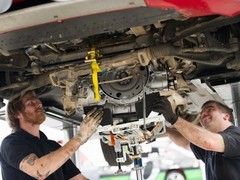 "Can you smell dog?"

We have been quoted £4,129 inc VAT for the replacement of the box, which as far as I'm aware is a pretty good rate, although I totally understand that it's still a sizeable sum taking into account the car's value."

So that was the deal. The car's probably worth £13K in the trade, if I'm lucky - so you can work out the percentage of the total value yourself. It's a salutary lesson in the expense of complicated components in modern vehicles, but then I always knew the 'box would present a bill at some point.

And I've had quite a deal here. Hands-up, I'm not sure every S4 owner would receive the same treatment, but equally, they would stand a much better chance of cloaking the engine upgrade and seeking the aforementioned goodwill because there wouldn't be a Youtube video of their car, er, drag-racing an RS4.

However, I still view this as a very, very big bill.

It took a while to fit mind. Audi had the car for several weeks, during which time I suspect they either sent it back to Ingolstadt to show just how much appalling neglect an S4 can handle, or they had a good root around the engine ECU to understand what Revo has done to release so much extra performance. If I was them, I'd have done both! 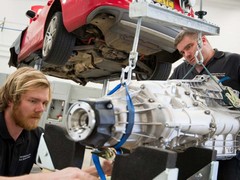 One thing I am certain of, the extra power and torque hasn't caused the demise of the original 'box. It might well have contributed to the speed of its decline, but it was a gonner before I touched the engine.

Now it's back, shifting crisply and the motor remains startlingly strong. The rest of the car is in a right old state. I want to renew the suspension and completely re-bush it and the Revo chaps have kindly provided a new set of front discs and pads. I like exterior shabbiness, I hate mechanical shabbiness and the car is currently feeling a little tired in the chassis department.

When that's done, I have to decide if we keep it or not. I can't think of a better all-round camera car/holdall for the money, but Neil has aspirations for a full-on camera supporting chase machine, and that inevitable has me looking east.

Despite the cost, this is still the best small, fast estate car around.