It all started so well ... and now the M4 is in the body shop

I'd love to be telling you about a blissful month driving 'my' rather gorgeous Austin Yellow BMW M4 and general adventures in oversteer and M goodness. As you'll see from the pics and vid below I've managed to get a small taste of that. 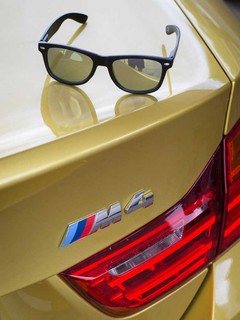 And then an idiot in a bus decided to drive into it while Matt was stationary in traffic. And then away without stopping, exploiting the bus lane to make good his escape. Like that ominous

that was spotted after the Titanic sank I'm now scouting Kingston-upon-Thames for an Abellio single decker with a tell-tale smear of Austin Yellow on its side. [Update: Abellio have denied all knowledge and dobbed in London United as likely culprits - we're following up! - Ed.] Turns out it doesn't come cheap that stuff. I'm not quite at the stage of stalking the local bus garage with a baseball bat in hand but the thought had crossed my mind...

As I speak repairs have finally been authorised and a bill for £1,248 will shortly be landing on the mat. Ouch. I'd braced myself for that rather spectacular paint being expensive to correct but, given how relatively light the damage, wasn't expecting a four-figure bottom line.

Then we get to the tyres. As any racing driver will tell you it's always important your rubber is suitably scrubbed in before really going for it and, as you'll see, I think due diligence has been exercised on that score. A morning bagging a library of pictures for forthcoming reports was my first real chance to drive the car in anger and, by heck, it does like to oversteer. I knew this of course. But its enthusiasm to break traction is extraordinary, the boosty power delivery of that turbo six seemingly geared towards doing that at every possible opportunity. Which is fun if you're in the mood. Lots of fun. Indeed, the engine is so grunty you can do it from a gear higher than you might have expected, meaning you've got lots of revs left to play with should you wish to maintain the slide. Possibly into the next county, should you so desire. 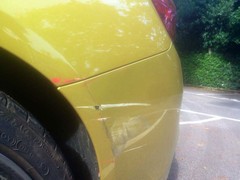 I still don't like the gooey feel of the electric steering either side of dead ahead, the variable gearing of the rack meaning it's deliberately slower off-centre. M Division has worked hard on the feel of the system though, fitting a bigger than usual motor for consistent response even when under load and using mechanical self-centring for a more natural feel winding off lock than you'd get if the power assistance was helping straighten the wheels. Probably one reason it feels more instinctive once you've got some lock on and predictable to balance against the throttle.

for more on the tech.

Could get expensive though. The car has also been moonlighting with our colleagues on Autocar and in the arrangements for the shoot I was told they "didn't anticipate much shreddage". Clearly temptation - and the M4's appetite for exactly that - got the better of someone though; give a man an M4 and an airfield to play on and it seems there's only one possible outcome. I'm just sorry I wasn't there to, ah, supervise.

Anyway. Reality bites and all that and while being costed up for the paint repair I asked my man at BMW's Berry Heathrow dealership to price up a pair of rears, the answer being £341.57 fitted. Each. Gulp. He reckoned they've got a couple of thousand miles in them yet, which is optimistic given the lack of self-control exhibited thus far. I'd best keep a leash on it while I'm shopping around to see if I can better that price then. And then give them a proper sending off before the summer is out and what is 'entertaining' on dry roads suddenly gets a bit involved on autumnal ones.

So there it is for now. As per the introduction I'd love to be bringing you more extensive insight of what life is actually like with an M4. But as it stands I can sum it up in a single word: expensive!

How much are new tyres again?

Previous reports
Dan wanted an M3, gets an M4 instead, gets as much sympathy as he deserves