I said something along these lines at the start of this loan but, weirdly, I wasn't that excited about the idea of running an M4. Sounds mad now I write that down. And as soon as the thing turned up I realised I was being an idiot. I'm more an AMG man at heart. But this is one hell of a car. 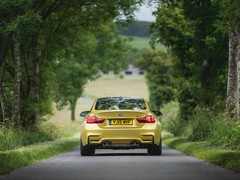 Definitely not an M Sport 430d from here!

Crucially it feels special and has both the visual impact and driving experience to put clear ground between this and regular BMWs, like

I ran as a previous long-termer. Many might wear the same badge, seemingly confirming the 'M for marketing' fears. But park the M4 alongside a regular 4 Series or, better still, drive it and it's heartening to realise it does still stand for something more.

But driving it is something denied to me for much of the car's initial period on fleet. Demands from colleagues for participation in photoshoots have seen it loaned out. But the biggest imposition was the extended period in Berry Heathrow's bodyshop as wrangles continued over the repair to the rear bumper after it got driven into by a bus. As previously reported Abellio said 'not us, guv' and then dobbed in London United as the culprits, complete with registration and route details of 'our' single decker. No honour among bus companies it would seem; we're following this up and await a response that hopefully involves coughing up for the repair. 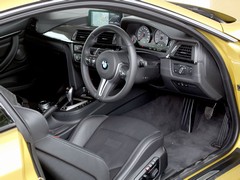 Too much road noise makes it here

Anyway, enough about that. I've actually been able to rack up some miles in the M4 and jolly good fun it has been too. Mainly. I'll have a couple of moans first, mainly to do with noise. There's a lot of tyre roar on rough surfaces, which is about the only real compromise for long-distance use because it's otherwise a very nice place to spend time. And then there's the engine noise. I need to get to the bottom of whether or not there actually is any speaker-based enhancement to the sound like the M5. Because reading another of those excellent

on BMW M-Power.com there's a lot of detail about the various ways the exhaust is routed in different driver modes, suggesting the additional noise in Sport and Sport Plus is 'natural'.

Frankly I have my suspicions though. There's something very synthetic - and unpleasantly intrusive - about the noise that erupts around the cabin when in Sport and Sport Plus that doesn't seem entirely in sync with engine revs or load. The connection between throttle pedal and noise produced just seems a bit false, which makes BMW's claims that the M4's acoustic feedback is (rightly) intended to reinforce the connection between car and driver seem a little suspect. I need to get a definitive answer but it's disappointing because from the outside it sounds brilliant. Very different from the traditional normally aspirated straight-sixes of old but savage, high-tech and very potent. On cold start-up in particular it's a properly purposeful sound. 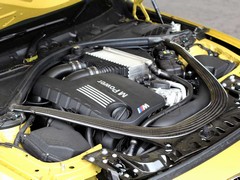 So just how much of this noise is being heard?

It seems to be a bit of an insecurity BMW has at the moment. It's like the development teams are desperately trying to make new-school turbo engines sound like old-school normally aspirated ones, which seems to me a hiding to nothing. There's the well documented M5 speaker-enhanced noise and the weirdness when the petrol engine fires up in the i8. Both actually sound really good from the outside but BMW seems determined to contrive a false impression in the cabin. Same with the M3/M4 engine.

I think someone at BMW M needs to spend some time in a RB26DETT-engined R32, R33 or R34 Skyline and realise that twin-turbo straight-sixes can sound fabulous in their own right and there's no need to hide the forced induction. As it's such a dominant characteristic of this car why not celebrate it?

Maybe the GTS, revealed in concept form, spied hacking round the 'ring in very real looking pre-production spec, will unleash a bit more of this character. I know not everyone is won over by the Halfords look but as an M4 convert I'm liking the sound of it.

Meanwhile I'll continue to enjoy 'my' car and nurse the tyres through to that threatened send-off on track. The roads are dry at the moment but even so it's turning into a proper handful. Fun in a way but new rubber definitely needs fitting sooner rather than later.

Previous reports
Dan wanted an M3, gets an M4 instead - what to do?!
It started so well... and now the M4 is in the bodyshop