4.1 seconds. That's how long 'my' DCT-equipped BMW M4 should take to reach 62mph. On the runway of RAF Alconbury, previous occupants the US Air Force, it felt more like four minutes. Four very spectacular minutes, granted, with what little remains of the rear Michelin Pilot Sports vapourised into smoke or left in thick black lines on the abrasive concrete. More smoke than igniting the near £700 of notes the BMW dealer would want for two rears? Possibly. I had plenty of time to reflect on this as my rivals in the PH/Autocar drag race extravaganza repeatedly disappeared into the distance anyway. 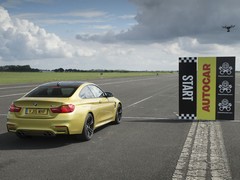 What does this prove, other than I am rubbish at standing starts and now absolutely, definitely need new rear tyres for the M4? I'm more into corners than straight lines to be honest but it was quite a revealing exercise in terms of how hard it is to balance the power delivery of the turbo'd straight-six, be that in a straight line or with the car sideways.

There is a launch control function on the car but even then it was lighting up the rear tyres and leaving black lines for a good 20 metres before the electronics supposedly governing the tyre slip managed to get a grip on the situation. It seems a little fussy about when and how often it'll let you use it though, meaning for many of the runs I was on my own. 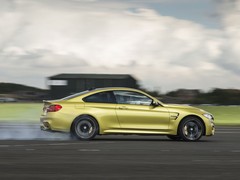 As has been (much) discussed all M's laudable attempts to build an engine that disguises the supposed downsides of forced induction has created a motor of considerable complexity. The two small turbos spool up so fast and boost so savagely that breaking traction is all too easy - peak torque at 1,850rpm will do that. It takes real subtlety and a right foot more delicate than mine to find that narrow sweet spot between all or nothing that gives you the best of the engine without bonfiring the tyres. But once the boost is on you've got peak torque until 5,500rpm and a lovely linear spread to play with. You've just got to manage that initial jolt.

In a straight line race it's a nightmare though. Too much too soon and you spin up. Back out and try modulating the throttle back in and - boom - soon as the boost comes back you're spinning the wheels again. Short shifting helps the initial traction but then - wham - the boost comes in even more violently. 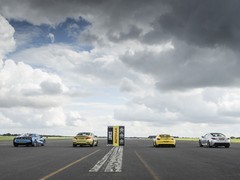 Ach, it's all a bit meaningless really because who drives their personal car like this? And having to learn an engine's character is the kind of challenge I like. It's anything but dull and there are sublime moments in this car when you successfully manage that initial spike, ride out that huge mid range and just hold the car on the cusp of breaking traction out of a roundabout or corner with the active diff and stability control giving you just a hint of slide. I return to my pet hate of the fake noise but it would be a lot easier to understand what the engine is up to if you were getting real sound directly proportional to throttle opening and load. It's so frustrating because it sounds brilliant from the outside.

There are advantages to that new engine compared with its predecessor though. Regular long-haul travel down the M1 with a bit of A5 and A43 to liven up the middle before M40/M25 and suburban schlep will see it return around 30mpg which is, I think, reasonable given the state of tune. And sci-fi to those with experience of the old V8. 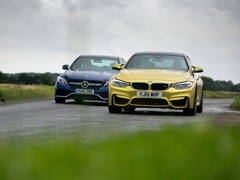 Rightly this is a car dominated by its engine though, and it's one I'm still learning how to make the most of. It's a fascinating process and full of reward; long-term tests are about discovering the hidden depths launch drives or regular loans don't reveal. Moreover, even though I've had a bit of a purple patch of bookings recently, hopping between some very special cars, I always feel a little spark of excitement as I unlock the M4 and leave the door open to hear that fierce cold-start bark. Small but important signs of emotional bonding an M product like this should inspire. It's not a perfect car. But it's one growing in my affections with every passing week and reveals more of itself over time.

How does it compare with the C63 you're wondering? More on that in due course... First, those tyres. And, no, I'm not going to be paying dealer prices.

Previous reports
Dan wanted an M3, gets an M4 instead - what to do?!
It started so well... and now the M4 is in the bodyshop
Finally back from the bodyshop; time to drive!