After eight months and 12,000 miles Dan reckons the M4 deserves a place among the M greats

So the M4 has gone. It's been one of the more interesting long-termers, overturning quite a few preconceptions along the way and convincing me that - for all the initial controversy - this could yet be one of the great M cars.

It's interesting that limited exposure to the new M3 or M4 seems to leave people cold. As such it's not dazzled on the first drive review or triumphed in the group tests in the way it might. People have moaned bitterly about the turbo engine's power delivery and the lairy handling. Both, to my mind, define the car. In a good way. 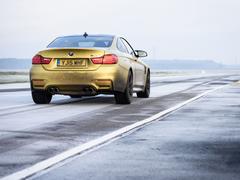 Ready Blyton Park? No, really, are you ready?

Every manufacturer has had to grasp the nettle of turbocharging in one way or another. M Division had to somehow translate the high-revving nature customers loved, but saw an opportunity in

to address the torque deficit the same fans moaned about. Largely I think the S55 motor is a triumph.

If not without its issues. The vicious way it comes on boost and the unsettling effect this has on traction seems exacerbated by the fact none of the three damper modes seems an entirely happy match with the springs. On wet and bumpy tarmac it really struggles. And the initial mushiness in the variable ratio steering rack frustrates too, especially for the way it masks what is a really positive, pointy front end.

Many bemoan the noise, saying it doesn't have the spine-tingling character of previous M motors. To them I say stand at the side of the road and get someone to drive it up and down a few times - from the outside it sounds spectacular. I also love the angry, metallic cold start-up routine, a feature it shares with the previous car's V8 and the straight-sixes before that. Without the pointless and intrusive Active Sound Design it sounds - and feels - like a proper M straight-six. Certainly the decision to go for two small turbos and engineer all sorts of clever boost recirculation and other measures to keep it on the boil mean it's got a vast power band and a properly exciting top end to the rev range. If you dare go there. 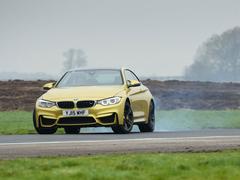 Signing off in style

What really stands out about the M4 are the demands it makes of you. Too many fast cars these days deliver their performance in a manner seemingly devoid of consequence. Not so the M4. If you're heavy-handed you'll be bouncing from one DSC intervention to another. Or possibly into a ditch. This car never, ever lets you forget its aggressively rear-driven balance or willingness to make you look like a real idiot.

An example. The photos and video below are from my last hurrah in the car at Blyton Park on the spare set of wheels with pre-knackered tyres I'd been saving for just such an occasion. For one corner second gear seemed slower and lower than what was needed but kept the revs and boost up, making the ensuing slide absolute child's play. Every time I tried it in third I span though, the higher gear meaning it was off boost and then suddenly on it, the car swapping ends before I even knew what was happening.

On the flipside there was a faster, more open corner coming out of one of the chicanes and in second it was just gripping and going. Short shifting into third and using that same boost spike made it possible to light up the rear tyres and scribe a beautiful, languid drift all the way into fourth gear and beyond. Brilliant fun. 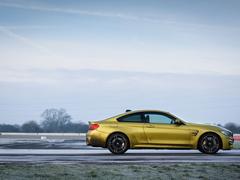 Austin Yellow even better when it's filthy

Skidding around is all very amusing but applying that knowledge to

and tidy also helped, more considered applications of throttle revealing the M Diff is actually very, very good at balancing the traction forces across the rear axle and offering incredible drive out of the corner. If you get it right. Which takes forward planning and an understanding of where in the powerband you want to be, and in which gear, at any given time. Once you're over that boost spike the brilliant throttle response and linearity of the power delivery mean it's easy to adjust the car's stance on the throttle, even on the road and with mere suggestions of corrective lock rather than great armfuls. Mid-way MDM mode on the DSC gives you enough to play with and just nudge the limits, albeit with enough slack to hang yourself if you got greedy. And in any situation the car just feels thrillingly, breathtakingly fast.

Did I ever regret not having a manual? Hand on heart, no. The M DCT box feels perfectly matched to the engine, chassis and various control systems and manages to mooch like an auto when needed but also deliver near-sequential style shifts in maximum attack. I loved it and rate it a key part of the M3/M4 experience. Would I put £6,250 into ceramic brakes if it were my money? I finally got to try a car with the standard steels and they look and feel more up to the job than previous M brakes and have a nicer initial bite. But the ceramics look cool and feel unflappable, even when glowing red hot. 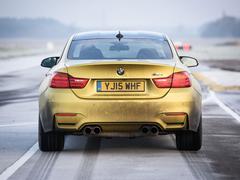 Cheerio then M4, it's been quite the adventure

The rest of the package was just great too. I like BMW interiors; from previous experience I know iDrive is now about the best of its type and remains one of the few infotainment systems you can truthfully operate without taking your eyes off the road. The cabin was sober compared with the exterior but couldn't be faulted in functional or quality terms. And once I disconnected the

all was good. Credit should be given to the economy - 30mpg was entirely achievable on a run and I'd happily go over 300 miles before needing to fill up. Impressive for a car of this nature and a lot better than the

. At the other end of the scale track work would see it slurp the super at a rate of 8mpg!

Most of all though I just loved the way it looked. Every time I parked it up, every time I waited in a queue at a petrol station till I'd spend a few seconds gawping at it. In Austin Yellow it's not a subtle car by any stretch but I think the driving experience more than lives up to the promise. And there's absolutely no danger of confusing it with a 'civilian' 4 Series. From the dished wheels to the duck-tailed carbon bootlid it just looked spot-on to these eyes. I still prefer the more exaggerated proportions of the M3 saloon. But the coupe is a fine looking thing too.

So not perfect then. But all the more interesting for that and a real grower. It'll be missed.

Previous reports
Dan wanted an M3, gets an M4 instead - what to do?!
It started so well... and now the M4 is in the bodyshop
Finally back from the bodyshop; time to drive!
Tyres were harmed in the making of this film
Just read the ruddy manual!
So, is it better than the C63 AMG?
Revealing its wild side in the winter gloom