Golf R makes its way to track, proves ruthlessly competent there as well

It is perhaps fair to say that the PH office isn't all that convinced by what is,

, VW's hottest of hot Golfs. The major criticism of the car is that it is, well, too damn good. Seriously. Ladies and gentlemen, we appear to have reached the point where cars are so talented that being "too good" is a reason for them being marked down as "not as good as they could be." 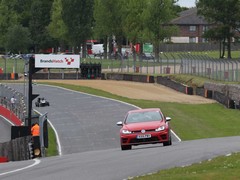 Caterham was ahead at the previous corner...

One of the first articles I wrote for PH criticised hot hatches for being too grown up, too capable and just a bit too serious. I still stand by that, but have equally come to realise that warm hatches now cater for those wanting a more playful car. These days hot hatches are very serious and, whilst it wouldn't be my preference, if you are going to disregard playfulness and instead focus on just making it go really bloody fast and chasing numbers, then you might as well make it easy to drive. The fact that it does this and is easy to live with and capable of delivering every last drop of performance anywhere, and at any time, makes the Golf R is an incredibly impressive car.

OK, so it might be a little lacking on dynamic interaction when really pushed, but the reality of British roads is that the opportunity to really push a car and experiment with its dynamic abilities just doesn't happen with any sort of regularity. What the R does is make the most of what its got, and if I'm being honest I really enjoy that about it. 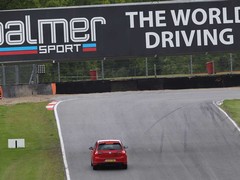 All this adds up to create an incredibly fast and accessible hot hatch, a point highlighted by a few laps on the legendary Brands Hatch GP track. Whilst it wasn't exactly playful, it more than held its own against some far more focused cars and was neat, tidy and alarmingly fast right from the off. No nasty surprises, just consistent and predictable. Whilst a very different approach to Renaultsport products, any R owners that head out on track won't be disappointed. I guess they are unlikely to do so regularly but they'll have a great day, especially if it happens to be raining!

The fact that it remains comfortable, useable, reliable and famously 'classless' cements why it has proved such a popular car. I'm hoping to take the car to Wales soon for a proper road trip adventure and to see how it copes with some of the best roads in Britain.

Previous updates:
All The Internet owns one, now PH has a Golf R!
Golf R great everyday; who'd have thought?