Fresh from a group test victory, the Up continues to impress 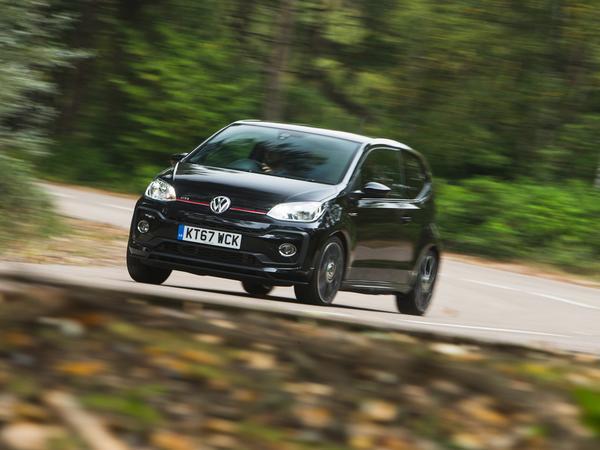 The fiercest action the Up GTI has seen this month was, of course, our triple test. This pitted it against rivals in the shape of the Mazda 2 GT Sport and Suzuki Swift Sport, with all three heading to Longcross Proving Ground to test their mettle (and metal).

I spent the couple of days beforehand in the Mazda, and agreed with Matt's prognosis that it provided a big car feel in a small car package. I didn't, however, necessarily agree that this was an entirely good thing. Compared to the diminutive Up the - supposedly lighter - Mazda felt sluggish and cumbersome off the line. Where the GTI's mid-range torque delivers sufficient zip in daily driving, the GT Sport, in true Japanese tradition, required plenty of revs to feel like it was giving you its best. Surprising as it may be, but plenty of revs are hard to come by during a city commute.

In the end the Up won, but only by default, really, which felt like a rather hollow victory. To be entirely honest, long-termer allegiance aside, my favourite was the Swift. [1] Yes it's expensive - though not terribly so, for the options it comes with as standard - and, no, it isn't as effervescent as its predecessor. That Suzuki held out with a naturally-aspirated model for so long was rightfully celebrated at the time, but to me it feels harsh to now hold the new model's inevitable forced-induction against it. It's a more broadly capable, better equipped and faster car than the VW. Then again, it ought to be for an extra £4,000. Too expensive, see... (return to [1] and repeat).

Anyway, back to the Up. Its minimalist frugality is one of its greatest strengths, and has really come to the fore in recent weeks. The genius of using your smartphone as the car's infotainment screen wasn't lost on me to begin with, but has been demonstrated even more clearly (literally) by my recent upgrade from iPhone 7 to XS. In the blink of an eye the Up's screen has transformed from a 4.7-inch 326ppi LCD to a 5.8-inch 458ppi OLED.

It's far better than the unit VW would have been able to provide at the price point, better even than the screens on many more premium models, and best of all completely future proof. Up GTI owners in 2025 will still be able to make use of the latest tech for at no additional cost - assuming we're not all using Apple-branded graphene-coated nano implants by then. If only Volkswagen would offer a dashtop mount with wireless charging built in, it would be perfect.

The Up has been economical, too. On the ride back from Retropower - which involved two hours of spirited countryside, mundane motorway and stop-start urban driving - it returned a healthy 53.5mpg. This was slightly better than Sam's Fiesta ST managed on the same trip, despite that car's ability to run on just two cylinders whilst cruising.

A quick word, too, on just how good it looks. I couldn't help but notice, as Matt pulled away in it one night, having made the exchange for the Mazda, the way the car slunk through the darkness, the street lights catching the pearly black paint and glinting off the polished wheels. For this price point it really is far more handsome than any of its competitors, and that will matter to some, especially as a city car.

All in all then, it's been a pretty solid month, there have been no new complaints to speak of, but several plus points have been uncovered. There are likely to be new challenges for the Up as the winter months arrive, though, with plenty more time to be spent in the (thankfully heated) driver's seat. More on that next time.

Previous reports:
PH gets All Fired Up about the latest Fleet arrival
When is a GTI not a GTI? When it's an Up!