PH is off to have a go with the

tomorrow, so it won’t surprise you to hear that’s inspired a bit of fast Nissan-based procrastination. Sorry, research. As happy coincidence that overlapped with browsing the catalogue for the RM Auctions’

we’ll also be attending in a couple of weeks time, where we found this rather magnificent looking 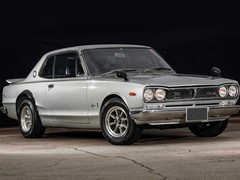 What, and you thought the story of the Skyline started with the R32?

You can educate yourself on the four-door origins of the Skyline and the 2000GT’s brief moment in the (rising) sun at the 1964 Japan Grand Prix with this excellent Nissan vid. The Hakosuka you see here was a two-door evolution of the third-generation Skyline, PGC10 four-door becoming the KPGC10 coupe you see here and setting the template for the more familiar modern-day GT-Rs. ­

No turbos, four-wheel drive or four-wheel steer back in the day though. Instead the Hakosuka used a triple-carb 2.0-litre twin-cam straight-six that in race trim was a proper screamer. How good does it sound? We’ll refer you to the onboard vid here that we ran as a Time For Tea? some time ago. If the road car offers even a taste of that noise we’re in. 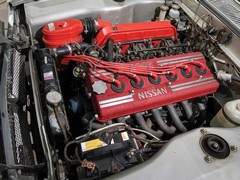 And just look at it too. OK, it’s not a beauty in the mould of some of the Italian exotica also on sale with RM at Pebble but the boxy silhouette is offset perfectly with the riveted on wheelarch extensions, factory wing and Watanabe wheels. Yes, even in the 70s Skyline owners were using aftermarket hop-up parts but the original steelies are included in the sale so if you’re a proper purist you can have it looking factory spec too.

It’s funny too; the game of attempting to construct a mental image of what a car is like to drive from pictures is one we’ve probably all indulged in but just looking at the interior shots you can almost feel the heft in that slim-rimmed steering wheel, imagine the precision of that dinky little gearshift and smell the mixture of 70s plastics and vinyl, underscored with the whiff of petrol being sucked in through those little carbs. 160hp means it won’t be quick by modern standards but that engine’s character has got to make up for that. 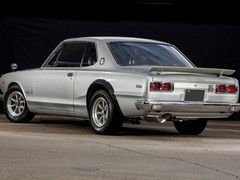 Seeing a car like this outside of Japan is rare and the price estimate is correspondingly burly, if modest in comparison to some of the other cars in the sale. Nor is it going to raise much interest in those who don’t know what it is. Which is to say most people.