The manual Ferrari has been dead for a while now, the

means the Lamborghini with a gearstick is no more and what does the future hold for Porsches with driver-operated clutches? 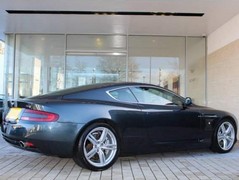 Familiar and still beautiful from outside...

In amongst those we've seen the slow demise of manual Astons too. The DBS lost its manual option when it became the

and so did the V12 Vantage, replaced by the Sportshift III-only

. Only the base V8 Vantage offers two transmission options.

Which all makes this DB9 manual rather a novelty, especially as it's another Aston model only available with an auto. With the 2013MY facelift the auto became the only transmission choice, with Aston saying customers simply didn't want three pedals.

Here was where the case for an auto-only DB9 range was going to be made. The V12 Vantage's manual shift came in for a fair bit of criticism after all, thanks to its baulky shift and awkwardly-sited lever. And the DB9 is more of a GT, isn't it? Let the auto shuffle along as you wile away the miles to the next European city of choice and all will be well. 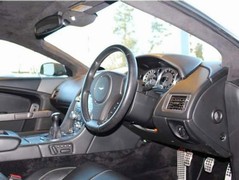 ... with a rather lovely surprise inside

But then reading back through PH's first experience of the manual DB9 rather changed that opinion. 'The harder you drive the better the change gets' we wrote, and also mentioned well placed pedals. Apparently 'sending the revs soaring towards the red line before snatching the next ratio is to indulge in an act of pure ecstasy.'

So it turns out a manual DB9 may indeed be something worth seeking out. But unsurprisingly, they aren't exactly common. Though the PH classifieds list eight manuals including this car in the 106 DB9s for sale, two are without interior pics and one 'manual' doesn't have a gearlever.

As a 2009MY facelift car, this DB9 benefits from extra power (470hp) and is one of the first to use Bilstein dampers too. As a PHer's modern Aston at £50K, this DB9 is a very exciting proposition.

Moreover, there are very few alternatives, or so it seems. A Ferrari 550 would probably be an even more absorbing drive for the same money and values seem to be rising, but the £50K cars are 15 years old now. And other than that, what other manual V12 GTs are there?