Who's up for an adventure with this famous five? 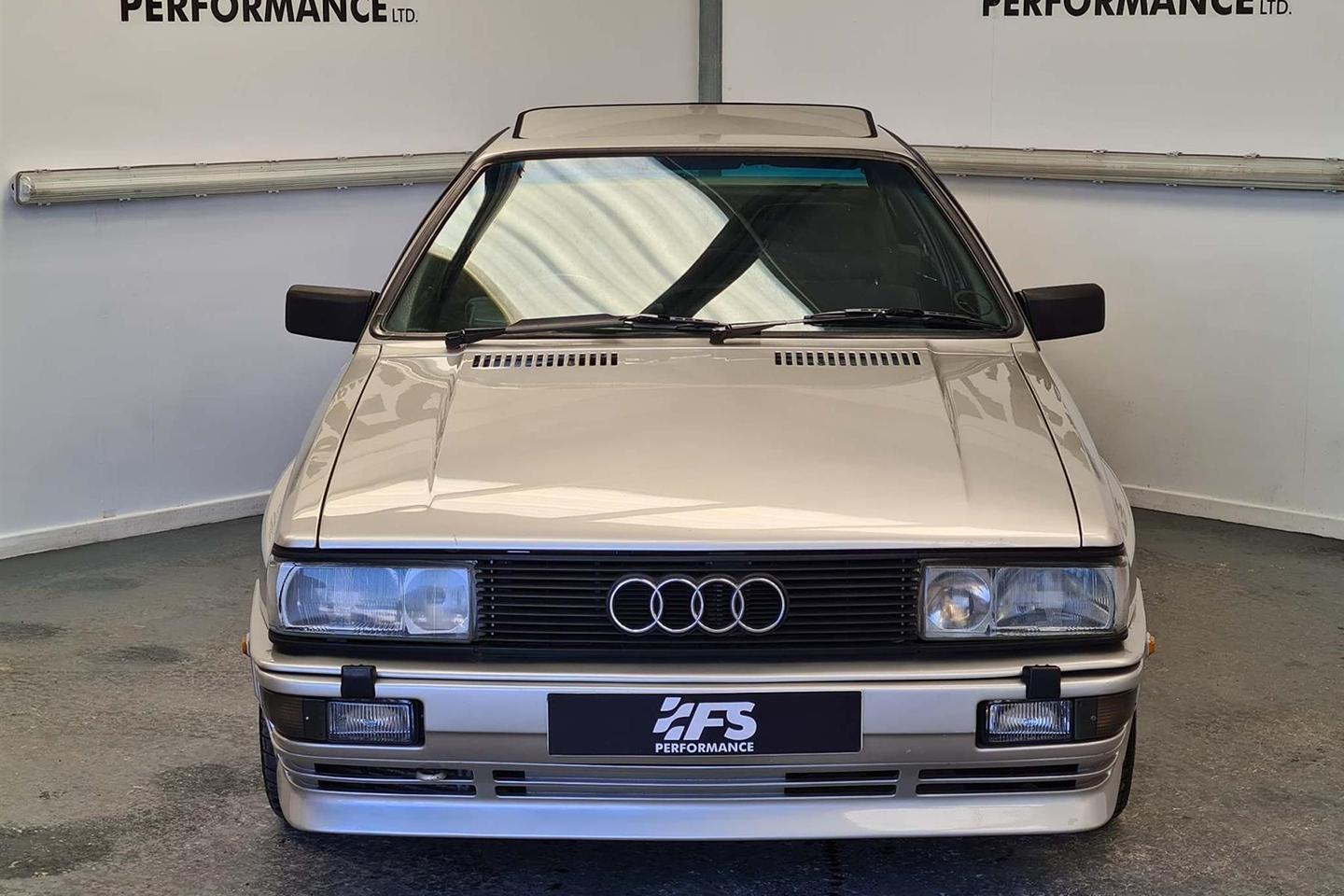 We've had a five-cylinder Pill before - a C4 generation Audi S6 Avant featured back in February. But we've never had an example of the most famous car to use this compellingly different powerplant. An omission hereby corrected in the stylish, wedgy form of this very attractively priced Audi Quattro.

Not that the Quattro's engine layout was the most radical thing about it when it arrived in 1980. As pedants will delight in telling you, it wasn't the first all-wheel driven performance road car, the Jensen FF preceding it by more than a decade. But the Audi was the one that sold in significant volumes, and which also revolutionized a motorsport genre.

Yet the very success of the Quattro's traction played a large part in turning this once innovative powertrain generic. Forty years on the list of sharp-end performance models that restrict drive to a single axle is now considerably shorter than the rollcall of those that divide it across a pair.

But a turbocharged five-pot engine still seems intriguingly odd, even though other manufacturers did toy with the configuration. Fiat, Mercedes, Volkswagen and even Chevrolet have all produced straight fives over the years, and VW even made a narrow-angle V5 for a time. Volvo's faith ran almost as deep as Audi's, producing both diesel and petrol inline fives, with the brawny T5 nabbed by Ford for some of its fastest 'noughties models. But Audi's association with five cylinders is the longest, and the only one that is still growing - the RS3 and TT RS are the last production cars using it.

Our Pill comes from closer to the beginning of the noble tradition. But there's a twist - this Quattro's engine dates from later than the rest of the car. As a 1985 model it would have been built with what is now referred to as the 10-valve engine, a 198hp 2.1-litre engine with a single overhead camshaft. At some point it has been fitted with the later, 2.2-litre, DOHC 20-valve motor, which made 217hp. Some will see that as a useful upgrade to both output and driveability, others as a heretical assault on the numbers-matching provenance of a modern classic. But the dinged originality and a couple of other issues are reflected in the price; for £21,950 this isn't just the cheapest Quattro in the classifieds, but seemingly the whole country.

The story of the Quattro has been told so often the guides at Audi's corporate museum can recite it in their sleep. So here's a version as condensed as army milk. The idea came to Audi chassis engineer Jörg Bensinger after experiencing the on-snow prowess of a military spec Volkswagen Iltis. Audi's R&D boss Ferdinand Piech - always a lover of radical ideas - was quickly persuaded and a hacked-about Audi 80 test mule was constructed. The ability to both revolutionize rallying and the ability of middle class skiers to reach previously inaccessible chalets was soon proven, and the project was green-lit.

The production version was given both a turbocharged five-cylinder engine, which made it properly quick by the standards of the early 80s, and a centre differential able to seamlessly split torque between each axle. It shared much of its core structure with the staid and profoundly unexciting 80-based B2 Audi Coupe but had been given a muscular reworking by British designer Martin Smith. The Quattro got fatter arches, bigger bumpers and the all-important lower case 'quattro' badge on the back so that lesser mortals would know what had just passed them at impossible speed on a slippery road. Underbody changes were more substantial, with the need to accommodate both the new drivetrain and independent rear suspension.

The motorsport version was developed in parallel and was successful from the off. On the first stage of the season-opening 1981 Monte Carlo rally Hannu Mikkola's Quattro overtook the Lancia Stratos that had started a minute earlier after just six miles. Mikkola was forced to retire after a crash, but took an easy victory in the Swedish Rally two weeks later. Quattros would stay at the sharp end of the WRC all the way through the Group B era, winning both drivers' and constructors championships in 1982 and 1984. By the end the last fire-breathing SWB 'E2' Sport Quattro was making around 600hp.

Back in 1980, early press reaction to the road-going Quattro was as positive as a party of protons. But would-be UK buyers faced a substantial issue - only left-hand drive cars were available for the first two years of production. That didn't stop some dedicated Brits from choosing them, although likely at the cost of a residual kicking come trade-in time. Sales grew once the steering wheel was available on the proper side, and especially as the '80s economy entered its loadsamoney phase. Yet because it was built off the main production line the Quattro was always a rare-groove car; just 11,500 were produced for all global markets before retirement in 1991 and no more than a few hundred reached the UK each year.

Having been registered in 1985 our Pill is the slightly smoothed off facelift model. But it pre-dates the arrival of the automatic Torsen centre differential that came with the all-alloy 20-valve engine, getting a manual locking system instead. It has covered a high-ish 175,000 miles according to the dealer selling it and, as the price would suggest, it's not perfect.

The advert admits that the digital speedometer is temperamental, the sunroof seal is past its prime and the tracking is out. A comprehensive set of pictures also reveal a small amount of rust bubbling and cracked paint on the rear wing. The rear bumper also seems to be sporting a non-standard gap to the bottom of the tailgate; it either needs to be refitted or there is a bit of trim missing. On the plus side, it's got a rorty Scorpion exhaust rear box - possibly a full system - and both the silver exterior paint and chequer cloth trim of the cabin have scrubbed up extremely well.

Quattro values have stayed relatively sane compared to those of other homologation specials from rallying's golden era. It's not long since values of the Audi overlapped with the Delta Integrale and two-door Sierra RS Cosworth, both of which have since headed for the stratosphere. Although the basics are tough, the Audi suffers from poor parts support and has definitely acquired a reputation as being one of those cars that can be a serious faff to put right. There are good specialists out there, but faults can be expensive and time-consuming to solve.

Yet even with all its declared issues, this one look like serious value compared to the wider market. The Quattro remains one of the most compelling examples of the genre it pioneered.