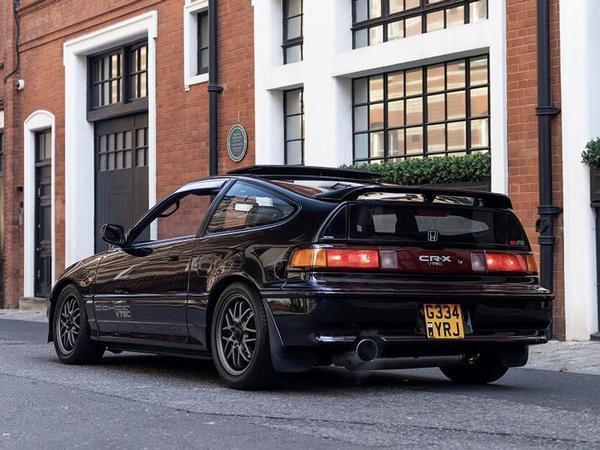 It's easy to see why the first Honda CR-X was such a hit when it launched with that taut coupe bodyshape back in 1983. Back then, its design was as modern as they came yet the car slotted into the compact end of the market, meaning it was attainable and usable. Good looks would form only a small part of what solidified the CR-X's place as a Honda aficionado's favourite, though. Why it was so loved then, and still is now, is because it drives and handles so sweetly.

Of course, not all models were worth shouting about. At the base end of the line-up there was a humble 58hp 1.3-litre motor, above this sat a 1.5-litre with up to 76hp, which, at the time, was pretty nippy. But the engine that grabbed attention was the most potent 1.6-litre, a DOHC unit that produced 137hp in Europe, meaning it out-punched the Peugeot 205 GTi 1.9. In Japan, the engine was given 142hp, a healthy sum for a car weighing no more than 900kg.

Things got even better when an extensively updated version of the front-wheel drive two-door arrived in 1987. The original model's front torsion bar and rear beam axle with trailing arms were traded for unusually advanced (for this segment) double wishbone suspension all-round. This gave the CR-X much-improved ride and handling.

In 1989, the engine line-up was given a boost to match. A new top 1.6-litre B16A VTEC motor - it was only the second Honda to get a VTEC - was added with 150hp in Europe, while top-spec, JDM-only SiRs got 160hp and a limited slip differential. Its power was enough to accelerate the CR-X to 60mph in seven seconds, swift by even today's standards, and provided a tantalising base for tuners eager for high-revving performance (it red-lined at 8,300rpm!).

With this in mind, it's not surprising to have seen so many CR-Xs end up extensively modified or torn apart and turned into track cars. Dozens of UK examples even race in a single-make series. Effective as these highly uprated models may be, the increasing rarity of standard cars has meant unmodified examples are becoming increasingly sought after. Today's Spotted may be slightly modified, but nonetheless sits at the right end of the spectrum; the changes are so tasteful we'd challenge anyone to claim they're not just a great example of OEM+.

This car, a Japanese import in 2007, has covered 67,000 miles and comes with domestic, as well as UK, service history. It's Britain-based owner has since refurbished the gorgeous Sparco NS2 alloy wheels - which suit that compact bodyshape perfectly - fitted a freer-flowing manifold and added a less restrictive induction kit. Expect some VTEC aural goodness to come as standard with those changes.

As far as we can tell, this is a cherished example that's received no shortage of care and love for most of its life. It's also one of only two SiRs currently listed on the PH classifieds, and one of only 10 CR-Xs. For the same price you can buy higher performance and more exotic badged machines. But when you're in a classic hot hatch that looks and goes as good as this one should, who cares?