Say 'E500' to anyone who knows a little about Mercedes and there's one car that will come to mind: the

. As the 500E originally and then E500 with the range refresh, it's the connoisseur's supersaloon. Barely identifiable from a standard E but with Porsche engineering know-how, huge performance and great rarity appeal, it's regarded by many as a Mercedes highpoint. 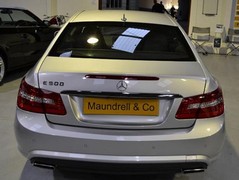 Let's get this debadged now shall we?

This is not an E500, in case you hadn't already noticed. It's

. Without an AMG version of the current E-Class coupe, the 5.5-litre V8 E500 always was the most powerful model. It was replaced last year by a more efficient and less exciting twin-turbo V6 in the

, but isn't there something charming about a big Mercedes coupe with a V8?

Yes, this is officially a 'Sport' model but it's so much more subtle than a full-fat AMG. The colour scheme is a bit predictable but you could argue that helps with the stealth factor. Remove the badge and you have a near-400hp V8 coupe that looks like an E220 diesel.

But the E500 isn't for hooning. It's a comfortable place to cover lots of miles with a heap of V8 performance (and hopefully a little bit of noise) when required. I would argue it does that in a great deal of style too but could see how some might disagree. If you could harbour the running costs the E500 would surely be a superb four-seat coupe for all sorts of occasions. There is actually a cabrio in the classifieds too if you fancy some open-air V8 journeys. 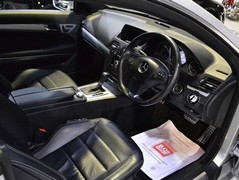 Silver with black keeps it under the radar

Which gets you thinking. What other fairly modern four-seat V8 coupes can you buy for less than £20K? Quite a nice set of criteria to fulfil really. The obvious choice is the

, before its own V6 facelift, which is now available from £15K. Perhaps a bit too sporty when compared to the Mercedes. A Bangle-era

is within budget as well if you fancy. The

ticks all the boxes but any rear-seat passengers probably won't be too happy.

The E500 wasn't ever going to be hugely popular as it was neither an all-out performance flagship or a frugal diesel. Now those traits that perhaps put off new buyers make it really appealing as used purchase. Who needs an AMG anyway?