Inspired by our drive around northern Scotland? Two very different £30K purchases to make the most of the experience...

There are many ways to experience the

, all likely to be memorable. We whizzed around it in 24 hours, deadline of a flight home from Inverness looming. PHers in the thread after our story were pondering the merits of doing it on a superbike. And adventure cyclist

is setting off this morning to do it on a push bike. Fair play to him but we'll stick to something with an engine. 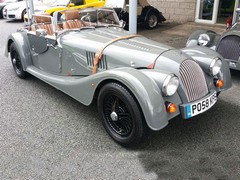 This has to be an agreeable way to travel...

What though? For this special Spotted we took a fictional £30K and considered two very different conveyances for enjoying the best of what northern Scotland has to offer. First, the back to basics option...

Caterhams, Ariels and similar were all discussed in the office and then Nikolai stumbled across this rather fetching Morgan 4/4 which rather nicely combines traditional British sports car fun in a package that doesn't skimp on character or comfort. Goes without saying appreciating the views is all the easier without the roof so it's got that nailed and, for ultimate credibility, it should probably be tackled with the windscreen removed, the aero screens in place and sans doors.

OK, it's not going to be the fastest vehicle point to point but this is all about the experience, right? And you need time to soak up the scenery. This is a really smart looking car and small enough to be fun on the singletrack roads that make up a significant proportion of the route. Imagining the views framed by the sweep of the wings and the leather strapped and louvred bonnet sounds ideal. And when the driving is done park it up by the beach at Clachtoll or Durness, pitch your tent and enjoy the sun set over the sea accompanied by the single malt of your choosing. Sounds good, right? 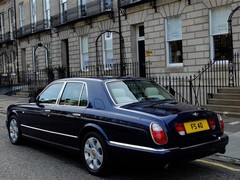 Then again maybe wind in the hair is overrated?

Or how about a very different approach? The whole idea of the route is to show off the tourism and gastronomy of the region and while you won't find a whole lot of that in John O'Groats there are plenty of swanky boutique hotels where the crunch of Bentley's tyres on the gravel driveway would seem an appropriate way to arrive.

Isn't it a bit of a barge though? Well for the singletrack bits the soft ride, raised sightline and ... assertive presence mean you'll probably take precedence at passing points. And you can't go especially quickly so you may as well do it luxuriously. And when the roads open out into the more flowing, wider and more accommodating sections you'll be able to appreciate making some progress at waft factor nine, delicately threading the Bentley through the turns with the slender steering wheel nipped between forefinger and thumb while the 400hp turbocharged V8 makes short work of any dawdling camper vans. Inspired? Check out our Bentley Arnage T Buying Guide here. It even comes with his'n'hers brollies in the boot. Well, it is Scotland. Just make sure you plan your fuel stops carefully...

So which is it to be? Details and ads for both cars below - let us know which you'd pick.