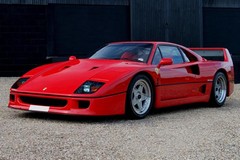 If you'd have asked Ferrari to build you a right-hand-drive F40 they would have probably laughed at you. They might have still offered a polite 'sorry sir, but we just can't...' when an esteemed customer called Hassanal Bolkiah made the same request.

When he ordered seven of them, however, it seems that they were happy to get on the phone to Pininfarina to see what they could do. Then again, Mr Bolkiah does happen to be the Sultan of Brunei...

What makes this F40 all the more remarkable is that five of those original seven cars are said to still be in the Sultan's possession. 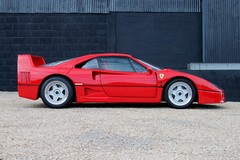 Aside from being right-hand drive, the car has also been fitted with 'LM' seats and a different headlining to afford the lucky pilot a tad more headroom. It's also been equipped with electric windows, which kind of goes against the hardcore ethos behind the last model Ferrari introduced before 'Il Commendatore' passed away.

The F40 is offered by specialists DK Engineering, who sold the car to its current owner and who confirm that a recent restoration has been carried out at a cost of...ahem...£100,000, which seems like an awful lot to spend on a car that's covered just 5,200 miles. Suffice to say it's in concours condition as a result.

It appeared in our classifieds recently and, not surprisingly, the price is available on application only. Personally I wouldn't expect a great deal of change from £500,000. So, I reckon it's this or something like, say, a Koenigsegg CCX. Oh to have to mull that one over...