367hp and 174mph are absurd in an A3, but can the new RS impress beyond the spec sheet?

Five minutes on the autostrada is all it takes. A Mini moves out to overtake and seems to be taking an awfully long time. A quick glance across reveals this particular Italian has no intentions of overtaking; he wants to see an

get a shift on. Be rude not to really. When (literally) in Rome and all that... 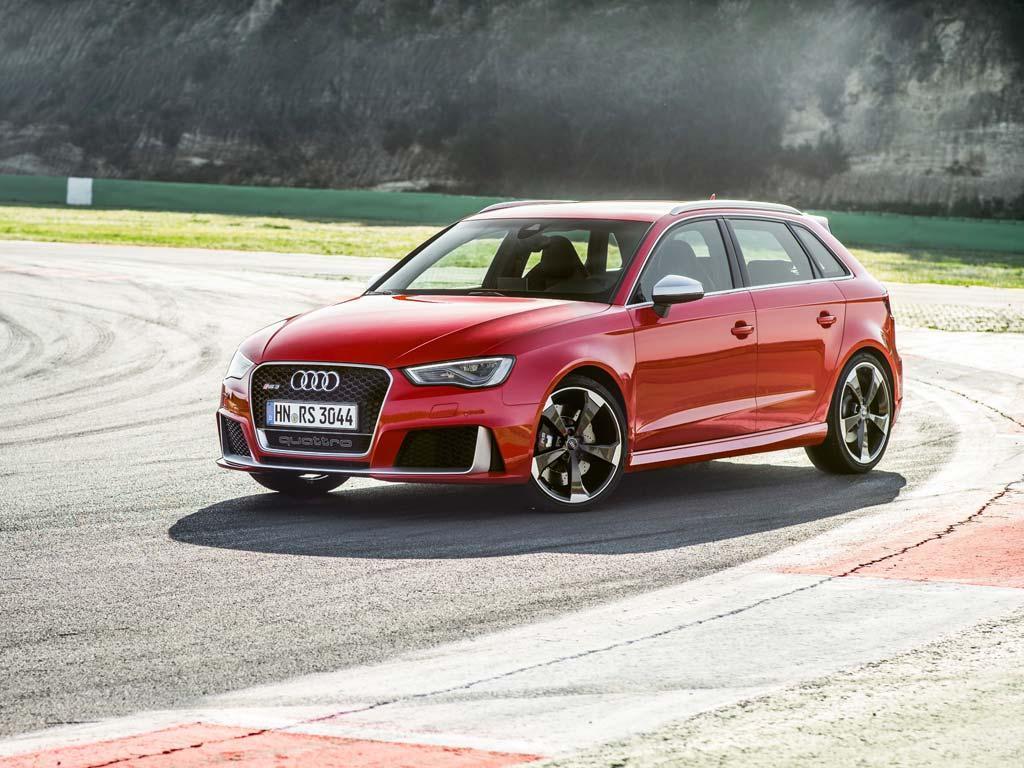 Red lip round the wheels is no more - hurrah!

Just in case it was ever in any doubt, the RS3 is a very fast car. Hopefully the Mini driver will attest to that. Peak torque of 343lb ft is practically omnipresent, available from 1,625rpm right through to 5,550rpm. It means exceptionally rapid progress can be made with little consideration for gear or engine speed. Whether that appeals or not will depend on whether you like

but there's no doubting its mighty effectiveness. So third gear, just to prove the point most emphatically. Even with longer ratios than really necessary the RS3 chomps through the gear and begins to power through fourth just as rapidly - that 174mph top speed (through an option box tick) feels eminently achievable. The smirk on the Mini driver's face when he comes past suggests the speed is just as impressive from the outside.

But RS Audis have always been fast, haven't they? RS2, RS4, RS6, original RS3 - straight line performance has never, ever been a problem. Where they have often struggled is with involving the driver, some elements of dynamic subtlety and, well, fun really.

'Steering without understeering'
Going purely from specification the new car promises a lot: lighter and faster than before, with the much-lauded MQB platform underneath it as well as the latest Haldex four-wheel drive with a repositioned clutch for faster response. The press bumf proudly claims 'steering without understeering' and 'controlled drifts with dynamically optimised torque distribution'. Intriguing. Whatever the case, the RS3 really needs to be on top form; while the original had the uberhatch market to itself on launch, the new car has a recently refreshed BMW M135i, the Mercedes A45 AMG and of course the enemy within to contend with too. Tough competition. 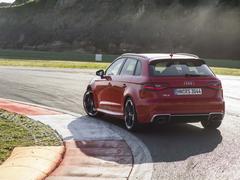 Audi has built a great deal of success on positive first impressions and the RS3 is no different. Sure, parked up next to a quartet of Sport Quattros it may lack a bit of visual oomph but there's enough to distinguish it without being too over the top. The 'quattro' grille insignia is optional (phew) but the wider front track, 19-inch wheels and big twin exhausts set just the right tone. Even casual observers will clock it as more than a 1.6 TDI.

Bar some slightly offset pedals all is well inside too. But then you knew that was going to be the case, right? Sportier seats jazz up the cabin a tad, as does Alcantara on the bits of the wheel never used, but to all intents and purposes it's a regular A3 cabin - no complaints there.

R'd man
Fire up the quattro (that reference had to feature once, apologies) and on the road it's a simply tremendous powertrain. Golf R comparisons will be inevitable throughout the RS3 discussion but this is one area where the Audi easily has the VW covered. That torque curve makes overtaking so easy but it's loves to rev too - that EA888 2.0-litre four-cylinder often makes peak power at 5,500rpm until just past six, leaving little incentive to chase the limiter despite a revvy nature. The five-cylinder lump makes its peak power at similar revs (5,550rpm) but remains there until 6,800rpm, just 200rpm shy of the cutout. All the while this stunning performance is accompanied by a magnificent noise; no piped in fakery here, just an onslaught of five-cylinder warble overlaid with some occasional turbo whistle. A few minutes in an RS3 is enough to make the Golf's contrived sporty sounds seem farcical. 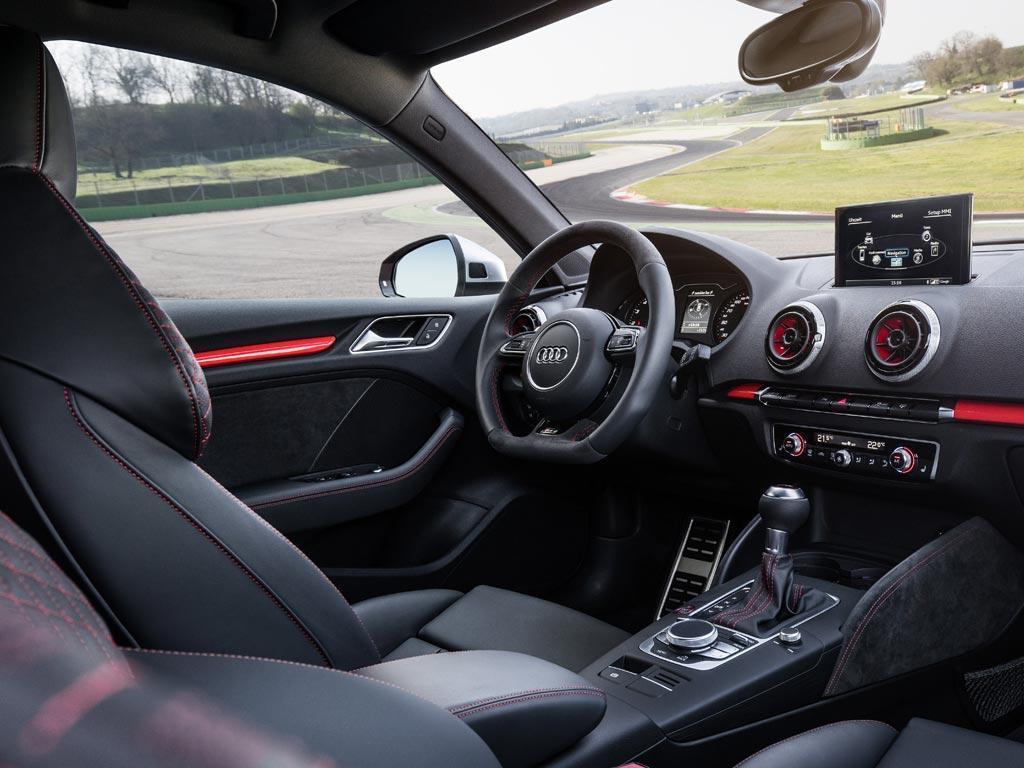 Business as usual in here, so very good indeed

Time an upshift correctly and a great 'whump!' comes from behind and you're off once more. Audi claims 'detailed solutions' for faster shifts and it has paid off; the seven-speed DSG is sharper than the six-speed Golf equivalent, more decisive both when left to its own devices and on the manual changes. Furthermore, when selecting gears on the paddles, it will neither kickdown on full throttle or change up at the limiter. Good. Why doesn't that apply in more cases?

So entertaining is the engine/gearbox combo, even when not at full attack, that it takes a little while to appreciate the RS3's other attributes. There were quite a few tunnels on the test route you see and, well... Anyway, the first surprise comes from the ride - it's really very good indeed. As standard the RS3 gets specific sports suspension 25mm lower than an A3 with passive springs and dampers plus 19-inch wheels.

Recipe for ... hang on!
Combine that specification with some fast Audis of the recent past plus Italy's famously pockmarked roads and it sounds like a recipe for disaster. But no! Sure, it's doesn't waft like a luxury saloon but there's real compliance and what feels like a decent amount of wheel travel as well. Never is it deflected by ruts and poor surfaces, the dampers simply absorbing the impact with the minimum of fuss and the RS3 continuing down the road at a ludicrous speed. 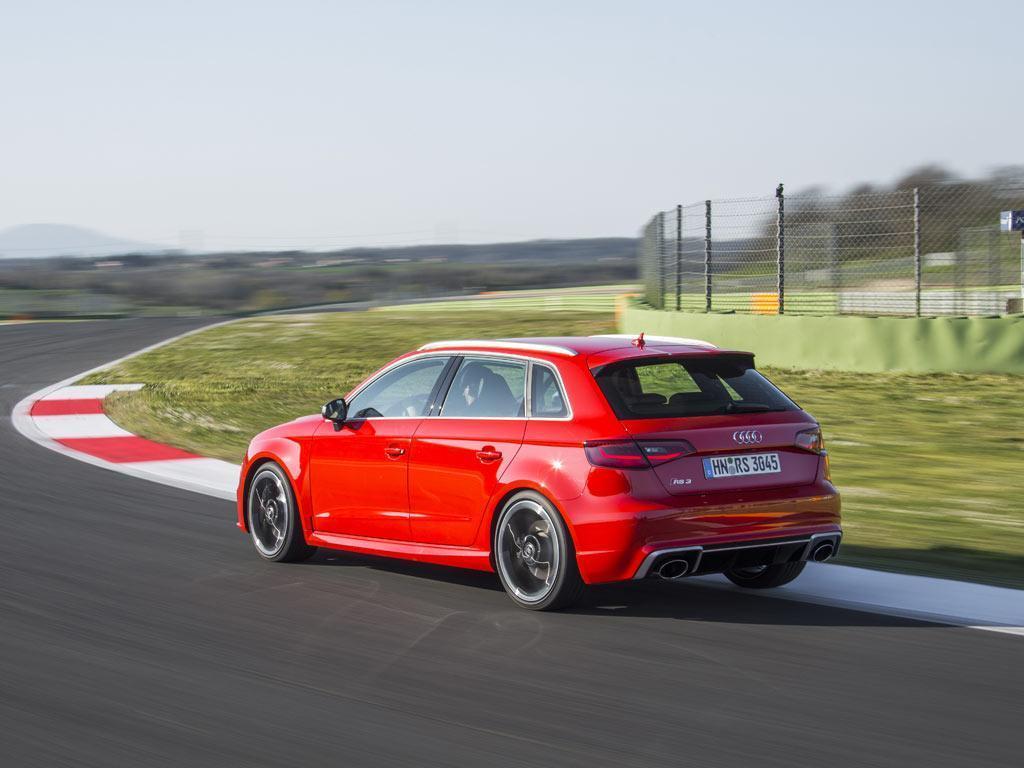 Certainly rapid on track, but not at home

That the brakes go unnoticed for a while says an awful lot. Much of the grabby feel associated with VW group brakes is absent, and the middle pedal has decent response for road use. With eight-piston (!) front calipers outright performance is never in doubt either. Both brakes and suspension confound fast Audi expectations to an appreciable degree.

Of course it's not all good news. Can you guess what's coming in for criticism? Yes, it's the steering... Alright, so it's hardly like the RS3's rivals are bastions of tactile response for the keen helmsman. But to guide a car with such tenacious front-end grip with no idea of where that ends is frustrating. Granted, it's accurate and certainly doesn't ruin the experience but the steering is a disappointment given the success elsewhere. If Audi can now make one spring and damper setting work then how can three steering modes all be so unpleasant?

Having said that the RS3 remains a very enjoyable road car, quick and composed with an engine and gearbox of exceptional quality. On the track? Ah, not so much.

To the circuit
The RS3s for the Vallelunga circuit are markedly different to the road cars: carbon-ceramic front discs, sports exhaust, magnetic dampers and bucket seats. Despite all that, despite the claims of controlled drifting, of the faster responding four-wheel drive and of the heightened agility, it's just not that much fun on a circuit. Whether it actually needs to be is another question entirely but you'd have to assume Audi has confidence in its abilities, or why else launch it there? 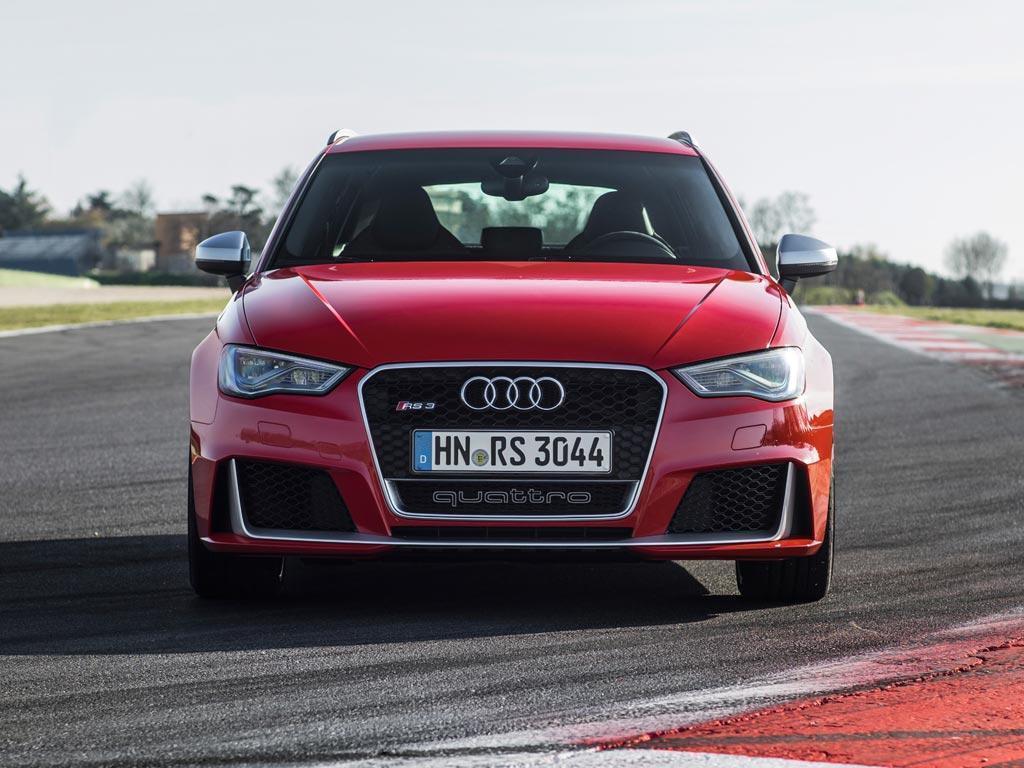 Probably best get used to this view

It's far from bad, and it's certainly fast (that word again), but there's not an awful lot of enjoyment there. Consider this as a starter: each front tyre is 20mm wider than the rear (255/30 R19 v. 235/35 R19). Getting an RS3 around a track is therefore very much about managing the front axle. And to its credit the car does turn in very well given how far forward the engine is (there's a 34mm wider front track than standard too) but fail to get the front on an apex and options are limited. A lift will tuck the front a little but not significantly and there was never any impression of power being distributed rearwards to help out. That Audi set the ESP to be non-switchable in the launch cars prevented a true dynamic assessment too.

The carbon-ceramic brakes won't be available as an option until later this year but, on this experience, they're not worth waiting for. Initial bite is a clear improvement on the standard system but the pedal went soft and rather grumbly after just a few minutes on track. The performance didn't appear to be affected but it's certainly not great for confidence.

Of the other extras the sports seats are perhaps the only ones to opt for. The sports exhaust suffers from Range Rover Sport SVR syndrome, where the standard noise is so good that it doesn't require messing around with by an overwrought sports system. And given how good the standard suspension felt on the road, the magnetic dampers seem a little unnecessary. But having not compared them in the same situations it's hard to be definitive. 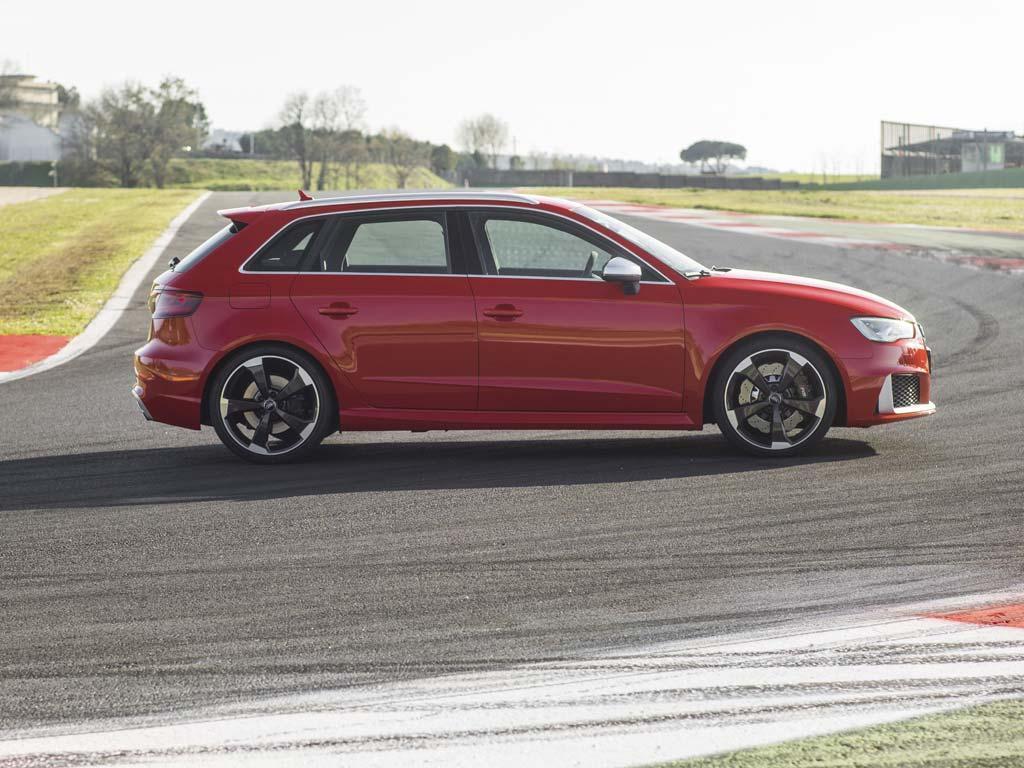 Well if you need a sensible five-door hatch...

Capable if not captivating probably best describes the RS3 on track. It will surely churn out some very impressive numbers while leaving the driver largely unexcited by the experience. Will that matter to RS3 fans? Not likely. Should prospective buyers be put off by rather one-dimensional track behaviour? Absolutely not. Where the RS3 excels is where it will spend the majority of its time: on the road. There a more relaxed rhythm plays to its strengths, the traction and power making swift progress very easy while the driver can enjoy that superb engine in a fast Audi that rides well. A test on a wet and bumpy British B-road will surely show the RS3 in its best light.

Inevitably both spec and driving comparisons will be made with the Golf R in due course. Having swapped from the PH long-termer for a day with the RS3, there are a few interesting observations to finish on. The Golf's weight advantage certainly makes it feel a little keener in direction changes and not an awful lot slower. But the RS3 counters with that terrific powertrain and better brakes. As an everyday hot hatch there's a lingering suspicion the Audi could just be preferable. That pesky Golf does hold a significant price advantage though: a five-door DSG R on 19s is £33,115, nearly £7K less than the Audi. Can the considerable five-cylinder charm be enough to offset the Golf's price advantage and freakish all-round ability? We'll hope to answer that very soon.